No relation to the deranged writings of Q the anonymous internet user. 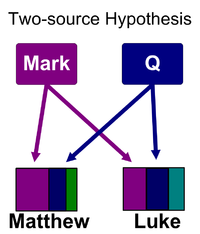 According to the Q gospel hypothesis, the Gospels of Matthew and Luke independently derived most of their contents mainly from the Gospel of Mark and the now-lost Q gospel. 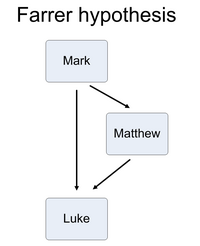 The Q gospel (from the German Quelle, meaning "source") is a hypothesised collection of Jesus' sayings and their accompanying scenes, and generally accepted to be one of two major sources

(the other being an early version of the Gospel of Mark) for the Gospels of Matthew and Luke. The two-source hypothesis is thus the preferred solution to the so-called synoptic problem

of why the three synoptic gospels of the New Testament (Mark, Matthew and Luke) resemble each other so much. Q's existence is inferred from the common material in Matthew and Luke which is not found in Mark as well as the latter being the oldest gospel (Markan priority

). Such direct parallels between Matthew and Luke as duplicate phrases and passages are unlikely to occur unless authors are relying on the same written sources, and not simply common oral contributions.

Theologian Burton Mack, an emeritus professor of early Christianity at Claremont School of Theology in Claremont, California, has written extensively on the subject, and included a reconstruction of Q in his book The Lost Gospel.[2]

Not all biblical scholars accept the existence of Q, however.

For instance, a small minority of scholars still assumes that Matthew, not Mark, is the oldest Gospel, a position known as the Augustinian hypothesis

(named after an early proponent, Augustine of Hippo). This was actually a widely accepted scenario for centuries prior to the advent of modern historical scrutiny of the Gospels and the reason for the order in which they appear in practically all bibles today (Matthew, Mark, Luke, and John). Contemporary scholars who still support the Augustinian hypothesis are highly likely to be adherents of various fundamentalist branches of Christianity and tend to favour "traditional authorship"[note 1] of the gospels as well. By contrast, Markan priority enjoys a widespread consensus, even among scholars who don't favour Q and the two-source hypothesis.

According to this hypothesis, (the author of) Matthew relied on Mark and added new material from oral sources and/or rewrote the Gospel of Mark to fit "Matthew's" theology.[note 2] Rather than stemming from Q, the common material in Luke and Matthew is viewed as originating from Luke relying on Mark and Matthew. Among the core criticisms of the two-source hypothesis is that it assumes that the authors of Matthew and Luke were mainly "copy/pasting" and not creative writers capable of constructing a new narrative by supplementing existing material with their own accounts, but only through rearrangement of existing material. Considering the number of Bible interpolations, this idea that the gospel writers were glorified copy-editors becomes rather tenuous. Also, quite apart from the fact that Q seems to have vanished without a trace, there's no hard evidence that the author of Luke would have been precluded from relying on the Gospel of Matthew (mainly because the dates and circumstances surrounding composition of both gospels are quite uncertain). One explanation for the complete lack of copies or even direct references to Q has been the suggestion that once Q became incorporated in both Matthew and Luke, early Christians saw no need to preserve Q itself as a separate document. However, this then raises the issue of why Mark didn't suffer the same fate, not to mention that Mark is also well attested in ancient sources (whence we know of the "short ending" of that gospel).

might complicate as well as simplify matters by, on the one hand, inserting an "extra step" and, on the other, provide a possible explanation for why the Gospel of Matthew might have been seen as problematic. Price suggests that Marcion of Sinope (or his followers), who compiled the first New Testament canon that we know of, was actually the first to write what we today know as the Gospel of Luke in the guise of his Gospel of the Lord.[note 3] If correct, this would provide an explanation for why so much of Matthew's material was either discarded or heavily edited: Marcion and the theology that bore his name rejected the God of the Old Testament and Judaism as irrelevant for Christianity, which Marcionites saw as the product of another and superior god.[note 4] As the Gospel of Matthew was rife with parallels between Jesus and various OT figures, it would have been useless to the Marcionites and would have had to be rejected or rewritten. In Price’s model, this “extremist” anti-OT stance in Marcion’s Gospel of the Lord would then have been modified in Luke, in order to better reconcile the Gentile and Jewish parts of early Christianity, though with Luke decidedly tilting towards the former. Price's scenario works equally well with the two-source hypothesis (and Price himself does adhere to the existence of Q), in which case Marcion would have rejected, rather than rewritten, the Gospel of Matthew, basing the Gospel of the Lord on Mark and Q.

Some apologists favour Q as it provides them with an "extra source" and, not being constrained by any actual surviving versions of Q, they can claim that it was a very early eye-witness account. Particularly odd is the acceptance of Q among apologists who adhere to the "traditional authorship" dogma. The "traditional authorship" scenario hardly needs a Q in the first place, because if the gospels really were contemporary eye witness accounts, then the common material in Matthew and Luke could more plausibly be explained by the authors witnessing the same events and/or being in contact with each other while writing their gospels. However, since the the two-source hypothesis is so widespread that it has made Q reasonably well-known beyond the narrow confines of divinity schools, seminars, and theology departments it's likely that these adherents of "traditional authorship" simply use Q to pad the rather slim amount of source material in a way similar to how they count the three synoptic gospels as separate sources.[note 5]