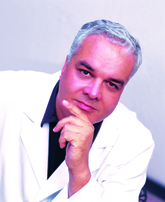 Matthias Rath (1955-) is a notorious quack vitamin pill magnate who unsuccessfully tried to sue The Guardian after nerd cheerleader and quackbuster Ben Goldacre cited strong evidence that he was responsible for deadly misinformation and health fraud profiteering.[1]

Rath is a peddler of vitamin pills, which he claims to have near-magical curative power. He is an influential AIDS denialist, being in no small part responsible for the South African government's shameful and deadly policy on AIDS under President Thabo Mbeki. Public health researchers have attributed 330,000 to 340,000 AIDS deaths, along with 171,000 other HIV infections and 35,000 infant HIV infections, to the South African government's former embrace of AIDS denialism.[2]

His campaign against South Africa's Treatment Action Campaign and founder Zackie Achmat was vicious to the point of being almost surreal. Former employee Anthony Brink actually filed a charge at the International Criminal Court in The Hague accusing Achmat of genocide, based on his support for use of antiretrovirals. Rath and his associates accused TAC of taking money from pharmaceutical companies (an allegation which is categorically false) and acting as shills for Big Pharma despite TAC's widely publicised and trenchant criticism of the pharmaceutical industry. The following section is genuine and apparently sincerely meant:

So much for Rath's organisation.

Rath's lawsuit prevented Goldacre from including a chapter on Rath in Bad Science. Happily the lawsuit having been dropped and the Guradian's costs paid, Rath has effectively accepted that he has no case, so Goldacre has published the missing chapter online.[3]