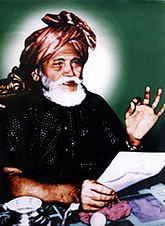 Meivazhi (Tamil: மெய்வழி Meyvaḻi), meaning 'the True Path', is a syncretic monotheistic religion started in 1900 in Tamil Nadu, India. It teaches that the 'real' purpose of religion is to bring humans closer to God and that all religions are essentially the same, having oneness which is where it gets its name. Like many other religions that came before it, it focuses on attaining its own brand of 'enlightenment' and conquer death by attaining Heaven, through the teachings of Meivazhi Salai Andavargal (Tamil: மெய்வழி சாலை ஆண்டவர்கள் meyvaḻi cālai āṇṭavarkaḷ) who is the last incarnation of God mentioned by all religious books and texts. Its followers all live in a remote village roughly three hours away from Madurai, India called Meivazhi Salai. Anyone can practice Meivazhi regardless of background, gender, or creed.[1][2]

The creation story of Meivazhi reads like a bootleg, discount origin story taken straight out of Genesis but is somehow even weirder and crazier.[3] Man is an astral being originally created by God in Heaven along with all the other angels; Oh, and Satan is there too. This time around Satan created a fruit that God warned Man not to eat because it would curse him with being both good and evil, and evil is bad. After not using curiosity to justify man's power over women, God banned Man from the Discord server for hurting his feelings.

After Man was put in time-out on Earth, God told him he had to get in touch with his feelings and be a good boy so he could go back to Heaven, otherwise he had to stay. Satan was shadow-banned from Twitter which Satan thought was bullshit so he proceeded to corrupt Mankind so he would stay banned too. Also he has invisibility powers… apparently.

At first Man was on good terms with the G-man and this was called Satya Yuga ("First Age").[4] But then in the Dvapara Yuga ("Third Age"), Man straight up forgot about God, allowing Satan to corrupt them. So Man began to start wondering about when the newest iPhone would come out as he became more and more materialistic and wordly.

God, failing to move on with the times, decided that them Man-lennials didn't need to worry about the newest iPhone, and that worldliness was bad. So he came up with the greatest idea ever! Why don't me and my angel crew just take on avatars and start a bunch of different religions and maybe one of them will take off and they'll all love me again! How could this possibly backfire?

It totally backfired in God's face when Satan pranked God by turning all the different religions against each other. Of course.

Some angels taking human form were tortured and crucified and the Angels were like, "Woah these people are fucking crazy. I'm not fucking with them." And none of them had the balls to come down and help the 'wise ape' learn about the true God, starting what is called the Kali Yuga. Then God got pissed at Satan and blew up his planet (because he apparently has one (Meivazhi Satan is so much more badass then Christian Satan) and banished him to Hell, which suddenly exists now. After that God decided to visit Man in avatar form one final time, marking the Kalki Yuga (a.k.a., the present).

Our story shifts to Salai Aandavargal, born in 1857 in India, who got fed up with false gurus pretending to be saints for selfish reasons like money.[5] Then he met a totally not fake guru named Shri Thanigai Mani Piran who was rumored to be over 600-years old and revealed to Salai his 'true form'.[6] Then he quit his job and abandoned his wife and children to attain spiritual enlightenment.[7] After traveling for a while, Salai's guru got bored with his new lover and needed an out so he told him to watch a flock of sheep for a year.[5] Then after that Salai came back and his guru was like, "Idk, go meditate in a cave on that hill over there for a couple years." which he did living only on prickly pears, an invasive type of cactus.[5] During this time he acquired 'divine symbols' in his hand, one of which was an upside down moon which is now the symbol of the religion. After Salai couldn't take a hint starving himself alone in a cave for many years,[6] his guru was like, "Oh. You're not de- I mean, you're not dead! You're now fully endowed with wit and power and now you must go commence your holy mission… alone. Then Salai started preaching and took a different wife, his old wife and children be damned, 'per his guru's wish' so his guru could be rid of him.

'It is claimed' that the reason Salai is the one true master and all those other gurus are fakes is because Salai doesn't need to sleep, has 'practically' overcome the need for food, and never breathes out of his nostrils.[1][7] Do you know somebody who only breathes out of his mouth? Yeah, I didn't think so. This guy is legit.

Salai then began to teach that all religions are the same, and that they should remember their forgotten origins and worship God. Worshiping His statues or photos (maybe Salai is His avatar now?) is very bad. Also materialism is bad too.

Also if you believe in God your body doesn't decompose.[1] Because why stop at zombie Jesus?

Oh, and the world is apparently going to end in 2077. Marketing said having a limited time offer would boost sales.[8]

The holy shrine and dress code[edit]

Their holy temple originally existed on land in Madurai, India but then the lands were acquired by the British Government and they were handsomely compensated in gold ornaments and jewels. Later in 1968, when the Indian Government implemented the Gold (Control) Act, designed to control sale and possession of gold, it is believed by officials that Salai gave these jewels and gold to some of his trusted followers and hid them in various locations illegally. During the 1970s most of the gold and ornaments were seized from the temples. Of course Salai's followers all maintain that all the gold and jewels were just mere gifts from their kind-hearted leader and that they only hid them so that Man wouldn't be tempted to seize what is rightfully God's.[9][7][10][1]

Followers of Meivazhi practice Vanakkam which means something like, "Hello God". The prayer/ritual schedule is around the clock and it goes like this:

The reason they have a jacked-up sleep schedule is because they believe that sleep is the 'cousin of death' and in order to obtain saint status, you gotta conquer sleep and slumber.[1] Never mind the adult body has been shown to require at least 6-7 hours of sleep daily.[11][12]

Also they have a community toilet which they trek over a kilometer to get to.[13]

No alcohol, smoking, or gambling. No watching movies or eating mutton. Very little electricity use is permitted,[13], so presumably that makes them the Indian version of the Amish. Also you can't be lazy, you have to have an active lifestyle.[1][6]