The Bombing of Dresden occurred on February 13, 1945 in World War II and has since become sort of a myth among neo-Nazis, the anti-American crowd,[note 1] and just general cranks. It is furthermore often used as a red herring in Holocaust denial.

By February 1945, Dresden, Germany was one of the last mostly undamaged cities still under Nazi control. It was furthermore an important industrial center and transportation hub with several major railways going into and out of the city. Both war-relevant transports as well as deportations into the death camps went through Dresden, even on the day of the bombings. Furthermore, by official Nazi decree, only "war-relevant" industries were still allowed to function. As such, all industry had become a legitimate target of military action by the Nazis' own admission. In the case of Dresden, this was a recipe for disaster as many small businesses were integrated into densely-populated neighborhoods. Thus separating civilian from military targets was next to impossible, especially given the high inaccuracy of target mechanisms of this time. According to the latest census data from 1939, Dresden had almost 630,000 inhabitants.[note 2] As the Soviets were already close to the Oder River (some 150-200 km from Dresden), the attack was also intended to aid the Soviet attack on Germany proper by taking out the substantial military forces still headquartered in Dresden. 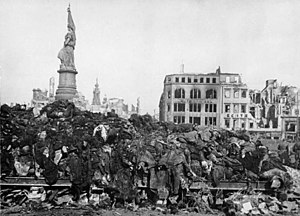 In the night of February 13-14 at roughly 22:00 CET, the attack began by marking the targets through light-marking devices.[note 3] Half an hour later most of the old town was in flames, as this was the area with the most military industry and hence the main target area. Due to the architecture of that time the fire quickly spread and was hard to extinguish, something that was known of and intended by the Royal Air Force.[note 4] At 1:23 AM, a second wave hit most of the parts of Dresden that had been spared by the first wave. As the fire from the first wave was still burning it functioned in essence as a target aid for the bomber pilots. In the next two days a couple of day attacks were flown, all focused on destroying the military industry and railway infrastructure of Dresden in order to take out all military capacity of the city. Furthermore, the famous "Church of Our Lady" (Frauenkirche), then as now a major landmark of the city, burned out and collapsed due to the major damage sustained during the bombing. All in all some 20,000 to 25,000 people died.[note 5][2]

Just to get this out of the way: 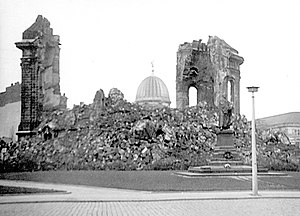 Probably a part of why the myth was so enduring: The ruins of the Frauenkirche were left untouched during GDR times; this photo is from 1970

As Dresden had deceived itself into believing that it had nothing to do with politics and as the city was internationally known for buildings like Semper's Opera house or the Frauenkirche, there was considerable shock among the populace at having been the target of an air raid. The Nazis were quick to seize an opportunity for propaganda and quickly released widely-exaggerated figures of 40,000 or even 200,000 dead, which at that time was demonstrably absurd to anybody living in Dresden, but hard to prove wrong for people elsewhere.[note 7] When in May 1945 the Nazis finally surrendered, the Soviets took over Dresden and it became one of the more important cities of the GDR. The general disdain for "bourgeois" old stuff notwithstanding, the GDR regime kept some buildings in their ruined state while seizing the opportunity in other cases to make tabula rasa for a complete rebuilding of entire neighborhoods in a "socialist" style, even if many of the buildings torn down could have easily been saved.[note 8] Furthermore, official Soviet propaganda reinforced an old Nazi trope, as they said that the "terror-air-raids" were "militarily unnecessary" while at the same time claiming that the Soviet soldiers were heroic liberators. This of course was a moderately clever way of tearing down the Western allies and letting the Soviet Union look not as bad as the US and Britain. Unfortunately a significant part of the inhabitants of Dresden swallowed the propaganda hook, line, and sinker, which should prove fertile ground for the neo-Nazis to plant their seed seeds in later.

Kurt Vonnegut, who is considered something of a left-wing icon, was in Dresden as a POW during the attack. He wrote a (highly fictionalized) account of the events in his most well-known book Slaughterhouse Five, or The Children's Crusade: A Duty-Dance with Death[note 9] and goes as far as quoting David Irving - On the number of victims that Irving blatantly exaggerated by a factor of ten. Though to be fair, at the time that Vonnegut wrote the book, Irving was not yet a Holocaust denier and Irving's sympathy for Hitler was not yet publicly known. 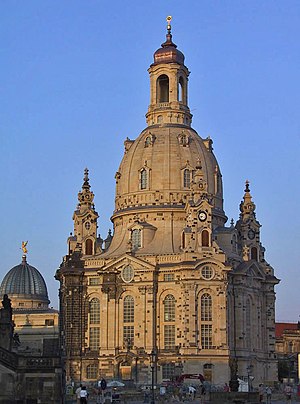 The Frauenkirche rebuilt; the black stones are from the old ruin

After the wall came down, many economic and political problems arose: unemployment, young people leaving, a sense of lack of purpose after having followed a "wrong" ideology for 40 years. Various types of political cranks took advantage of these problems. While the Frauenkirche was rebuilt between 1994 and 2004,[note 10] the tradition of "commemoration"[note 11] of the events of February 13 as well as the Soviet and Nazi propaganda (exaggerated victim figures included) proved fertile ground for neo-Nazis to agitate. Soon the "remembrance march" on February 13 (and sometimes the following Saturday as well) was the largest neo-Nazi demonstration of Europe, with neo-Nazis coming from Hungary, France and the Netherlands to perpetrate the "myth of Dresden." Thankfully while large parts of the (rather conservative) populace of Dresden remained silent and just wanted to have "their commemoration" (i.e. the Nazi myth without the Nazis), German antifascist groups[note 12] soon staged counter-manifestations to demystify the bombardment and raise awareness for the wider context of the war. As this attacked old sensibilities (namely Dresden being the "innocent victim"), they were at first not at all welcomed by a large part of the conservative populaces of Saxony and Dresden. Police violence also occurred[note 13] and some rather outrageous cases of supposed crimes by left-wing activists related to the demonstration have found their way into court. Still, February 13 is now largely over as a huge focus for German or European far-right groups.

Does the stupid ever end?[edit]

While Dresden is mostly out of the headlines when it comes to February 13, sadly another right-wing movement has originated and seems to have taken root mostly in Dresden. Namely PEGIDA, the "Patriotic Europeans against the Islamization of the Occident" (Patriotische Europäer gegen die Islamisierung des Abendlandes). While this movement of cranks and woo meisters has spread to other cities, it originated in Dresden and it was only there that it could take root. Basically the message of PEGIDA is that there are "two menni Mooslimz" (even though Muslims make up less than 3% of Dresden's population) and that the media all tell lies. When confronted with this absurdity, PEGIDA sympathizers reply that the media say that other cities where more Muslims live are horrible. Which is rather strange, considering PEGIDA sympathizers consider the media to tell only lies. In 2015 PEGIDA even ran a candidate for mayor in Dresden (who ironically enough is a carpetbagger from Hamburg) who obtained 10% in the first round and promptly withdrew in favor of the center-right candidate[note 14] in the second round to avoid the horror of a social democrat with ties to the Green Party and a leftist party becoming mayor. Needless to say, the center-right candidate won.

the man responsible for the bombing of Dresden, remained unapologetic and even claimed that he would have destroyed the city again.[4] Because of this, he is considered a hero among hardcore leftists and anti-Nazis, and in 2016 the "Bomber Harris, do it again!" meme was created to troll "wehraboos" (Wehrmacht apologists) and neo-Nazis in general[5] in the same way William T. Sherman memes were created to trigger neo-Confederates.[6]