The Yemeni Civil War is, unsurprisingly, an ongoing civil war being fought in Yemen. There are two primary factions involved: the Houthis

supported by Iran, and the internationally-recognized government of President Abdrabbuh Mansour Hadi.

Since March 2015, the conflict has resulted in more than 6,800 deaths and 35,000 injuries, most of them caused by airstrikes on densely-populated civilian areas from the Saudi-led coalition in support of the president.[1][2] The Saudi coalition has also imposed a blockade on all but one of Yemen's ports, although this one port city is now the scene of a furious battle.[3] The blockade has resulted in a famine that threatens 13 million people and may become the deadliest in a century.[4]

Although not all of the rebels are Shiites, members of the Houthi movement mostly adhere to the Zaidi sect[5] of Shiite Islam. Zaidis comprise the majority of Yemen's population and have theological similarities to Sunni Islam.[6] The Houthi movement fiercely opposes the West, Saudi Arabia and the Gulf States.[7]

However, the roots of this conflict do not spring solely from sectarianism. The former president of Yemen was himself a Zaidi Muslim, as is much of the government's loyalist army.[8] In fact, the conflict seems to be largely political in origin: note as background facts Yemen's large amount of poverty and economic inequality, and the government's 2014 policy which spiked fuel prices by between 60 and 90%.[9][10]

(in office 1978-2012) and they were angry at the Saudis and the United States for supporting him.[11] The American invasion of Iraq in 2003 radicalized them and drove them to seek closer ties with and aid from their ideological brothers Hezbollah.[11]

In 2011 the Houthis formed part of the coalition which brought down Yemen's dictator during the Arab Spring; when Saleh was replaced in February 2012 by Sunni President Haidi (whom many in Yemen saw as a Saudi yes-man), the furious Houthis felt that their efforts had backfired.[11] In the wake of this régime-change, the Yemeni government, with international assistance, came up with a new federal system whereby from late-2014 six autonomous provinces would represent the nation's religious and tribal divisions.[11] The Zaidi north got two provinces, both of which were landlocked, and which the Houthis believed were gerrymandered against them.[11] This anger led them to reverse their alliances and to collaborate with Yemen's ex-dictator Saleh to overthrow President Haidi's government.[11]

Saudi Arabia and the Gulf States believe and have levied accusations that the Houthis are proxies of Iran.[12] While the Houthis are certainly friendly with Iran[13] and have received a certain amount of smuggled military aid,[14] the Houthis are solely concerned with their domestic agenda and have no interest in being a pawn in Iran's squabble with the Saudis.[15] The clearest indicator that Iran does not control the Houthis' decision-making came when they completely ignored Iran's advice to avoid escalating the war by taking the capital of Yemen, Sana'a, in September 2014.[15] 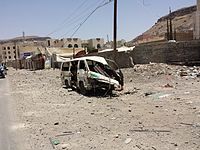 Aftermath of Saudi airstrikes in Sana'a.

Saudi Arabia began a military buildup along its border the moment the Houthi coup began, and the Houthis responded by boasting that they would retaliate against any Saudi aggression by invading the country and not stopping until they've taken the Saudi capital of Riyadh.[16] The Saudis began justifying intervention in Yemen on the (then baseless) claim that the Houthis were an Iranian proxy planning to turn Yemen into a Shiite terror state and attack Saudi Arabia.[17] President Haidi then went to the United Nations Security Council to ask for support for military action by "willing countries" against the Houthis.[18]

The military intervention by "willing countries" materialized when the Saudis assembled a coalition to launch a campaign of airstrikes in March 2015 after the Houthis and their allies began to advance south towards Aden.

The main coalition members[19][20] are the Saudis, the United Arab Emirates, Bahrain, Kuwait, Qatar (previously), Egypt, Jordan, Morocco, Sudan, and Senegal, although they have both direct and indirect support from the United States and the United Kingdom.[21] Warplanes from the main coalition members have taken part in the air campaign, and bombing continues even after the Saudis announced that their campaign had achieved its goals.[22] Saudi Arabia has allegedly also deployed special forces on the ground in Yemen to train loyalist fighters and guide the anti-Houthi resistance[23] although the kingdom has claimed that it has no "formal" troops there.[24]

Support from the United States is essential to the continuation of the coalition's bombing campaign. The US provides aerial refueling that allows Saudi bombers to run longer missions, provides intelligence and logistical support, and provides weaponry including heavy bombs and air-to-ground missiles.[25] The MK-82 bomb which slaughtered 40 children on a schoolbus in 2018 was manufactured by General Dynamics in Texas.[26] Meanwhile US and British officials have access to the Saudi command center as well as a complete list of targets.[27] In October 2016, the US directly attacked Houthis in Yemen for the first time, attacking rebel held radar sites in retaliation for an attempt to sink a US destroyer with anti-ship missiles (what, you thought this was goat-herders vs. stealth bombers?)[28]

Unfortunately, support from the United States for its most embarrassing ally's hideous war is unlikely to end anytime soon. President Trump in April 2019 vetoed a resolution passed by Congress which would have called on him to end US military involvement.[29] Trump claimed the resolution was " an unnecessary, dangerous attempt to weaken [his] constitutional authorities".[29]

Unhappy with Yemen's proposed six-region federal structure as detailed above, the Houthis invaded Yemen's capital Sana'a in early 2015 and took President Haidi hostage inside his own residence.[30] They promised to withdraw from the presidential palace in exchange for an agreement which would give them greater influence over the government and the ability to appoint officials.[30] However, the increasingly violent situation in Sana'a prompted the Cabinet and the President to resign their posts.[31] With the country in political limbo, the Houthis forcibly dissolved Yemen's parliament and announced that they were putting together an interim ruling committee to manage the nation's affairs.[32] This completed the coup and left the Houthis in charge of Yemen.

However, roughly a month later, President Haidi managed to escape house arrest and delivered a televised speech declaring that the Houthi takeover was illegitimate and that Haidi was still the rightful president of Yemen.[33] Meanwhile, Saleh, his predecessor as the dictator of Yemen, accused Haidi of destroying Yemen and demanded that he go into exile.[34] The situation finally turned violent when a part of Yemen's military still loyal to Saleh invaded the city of Aden, where Haidi was based, and sent planes to bomb the building he was using as his presidential residence.[35] After yet more violent clashes, the Houthis announced that they were going to invade southern Yemen to defeat Haidi, who they also accused of being affiliated with Al-Qaeda.[36]

As of late August 2018, the civilian death toll of the war is estimated by the UN to be almost 7,000, although the report concedes that the true figure is probably far higher.[37]

Unsurprisingly, the Saudi-led coalition has committed war crimes.[20] The Saudi coalition has assembled an investigative body, the Joint Incidents Assessment Team (JIAT), to look into incidents of war crimes and attempt to provide redress to victimized civilians.[38] Since the coalition is thus essentially investigating itself, it should come as no surprise that the JIAT true role seems to be organizing and executing coverups.[38]

Coalition airstrikes meanwhile, are directed not only at military targets but at funerals, schools, markets, residential areas, and civilian watercraft.[39] One particularly egregious example came in mid-2018 when a Saudi plane bombed a school bus, killing 40 children and 11 adults.[40] The coalition has used cluster munitions

supplied by the United States in civilian areas. Cluster munitions are banned by 118 countries; however, Saudi Arabia, US and Yemen are not among them.[41]

The Saudi coalition has also maintained a naval and air blockade against Yemen under the pretense that they're upholding a UN-imposed arms embargo against the Houthis.[39] However, the coalition ships are not only preventing weapons from reaching Houthi-controlled areas, but water and food and medicine as well.[42] This is a clear indicator that Saudi Arabia's strategy in Yemen is now based on strangling Houthi-controlled Yemen of all supplies necessary for human life, critically endangering not just their foes but civilians as well.[42]

Yemen was already heavily dependent on food imports and food aid before the war, and now more than 22 million Yemeni civilians are in desperate straits.[43] The blockade and the resulting famine have also exacerbated a cholera epidemic which began sweeping through the nation in 2017.[44] As of November 2017, more than 16 million people were already without access to clean water.[45] Almost every child in Yemen is malnourished and in need of food aid.[46]

Despite what is explained above, it's not like the Houthis have clean assholes on the issue of war crimes either. They're guilty of firing wide-area munitions indiscriminately into civilian areas.[39] They are also recruiting and using child soldiers on the front lines.[39] The UN also alleges that the Houthis have been using snipers to kill women and children leaving their homes to fetch essential supplies.[47] Refugees are wary of returning to their homes as the Houthis have been allegedly planting landmines in civilian areas during their retreats from coalition forces.[48]

The Houthis have also been firing rockets indiscriminately into Saudi Arabia.[49]

Taking the war outside Yemen[edit]

In early 2022, there were a number of drone and missile strikes on the United Arab Emirates, hitting an oil depot and targets near Abu Dhabi airport. The Houthis have claimed responsibility for most of them, although other groups also claimed responsibility for attacks.[50][51][52] In 2019 there were missile attacks on Saudi Arabia attributed by some to the Houthis but later found to have been conducted by Iran in response to Donald Trump's hostile foreign policy.[53]

The US government attitude to the Houthis has varied. There have been intelligence links with them in pursuing common aims in tackling terrorism.[54] Trump had the Houthis designated as a terrorist organisation, but Joe Biden revoked this and announced an end to US support for Saudi operations in Yemen.[55]

Weapons and military equipment supplied by the UK have been used by the Saudis in Yemen, including Typhoon fighter jets and Raytheon Paveway bombs.[56] Due to humanitarian concerns, Italy suspended arms sales to Saudi Arabia, and Joe Biden placed US sales under greater scrutiny in 2021, promising an end to support for offensive operations.[55]

There has long been a limited arms embargo against some Houthi leaders, which in February 2022 was extended to more of the Houthis, allegedly as a result of lobbying by the UAE; this embargo excluded the anti-Houthi alliance.[57]

The war is sometimes portrayed as a part of the wider struggle between Iran and Saudi Arabia for influence in the Middle East. However, while Iran has given some support to the Houthis, the Houthis do not appear to be operating under Iranian instruction or control, and it is less clear just how much assistance Iran has provided. The Houthis come from the Zaydi branch of Shia, different to the Twelver Shias in Iran and Iraq, so they are less strongly connected than Iranian proxies in Iraq.[54] Reports from 2015 and 2017 suggested that Iran was trying to get the Houthis to limit their military operations, and that the Houthis were cooperating with the United States against Al-Qaeda and other Sunni terrorists.[54] Evidence suggests that particularly earlier in the conflict Iranian involvement was small, in contrast to Saudi bombings and other interventions.[58] The Brookings Institution said that as the war continued, the Houthis moved closer to Iran, suggesting a foreign policy miscalculation particularly by Donald Trump who thought that fighting the Houthis would help reduce Iran's influence.[59] Since Trumps' condemnations, Iran appears to have supplied the Houthis with some missiles and other weapons (although they deny this), but it is unclear if they have any influence over how they are used.[53][55]