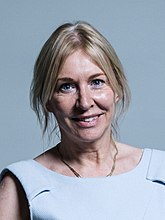 Nadine Dorries (b. 1957) is the UK Conservative MP for Mid-Bedfordshire. Her political positions include such empowering and progressive ideas as reducing the abortion term limit and introducing abstinence education to British schools. She is also in a long-standing feud with various people on the Internet and frequently says quite idiotic things both on Twitter and her blog.

Dorries is in a solidly safe seat, so the only people whose favour she needs to stay in her position are the local party. David Cameron found her a public embarrassment and would occasionally publicly slap her upside the head for stupidity.[2] Boris Johnson, of course, offered her a job - in July 2019 she was appointed as an under-secretary at the Department of Health in Boris Johnson's government, despite her lack of interest in health or medical science.[3]

When she joined the TV show I'm a Celebrity... she was suspended from the parliamentary party[4] (though they let her back in in May 2013[5]). Although many people in Britain really hoped that she would make the final (or anything else that might delay her return from Australia), she was too annoying even to torment for very long; the viewers put her into the first two Bushtucker Trials (making her eat a camel's toe, an ostrich's anus and some cattle genitals, and burying her alive in cockroaches) before tiring of her and making her the first celebrity voted out.[6] We're not making any of this up.

Dorries has introduced bills to lower the abortion term limit from 24 weeks to 20 weeks. Her anti-abortion campaign was backed heavily by Andrea Minichiello Williams from the fundamentalist group "Christian Concern for Our Nation."[7] She has also criticised the Church of England for being too "liberal" on their interpretation of Psalm 139, a favourite of anti-abortionists.[8]

More recently, Dorries has been working with Labour MP Frank Field to change the law to make it illegal for abortion providers to also provide abortion counselling services. This is in order to try and get women who want abortion counselling to go to pro-life groups or to be discouraged from getting an abortion.[9] She has claimed that the British Association of Counsellors and Psychotherapists is backing this move... which they aren't.[10] She has also made up various statistics and distorted the scientific evidence in her religious quest to limit abortion access.[11]

Dorries has a unique take on epistemology and the nature of science:

At the foot of this report there are links to others and there are plenty more where they came from. But it’s all about science. Which is about the definition of fact. Which facts are indisputable and which are not. There are as many 'facts' as you wish to choose from on both sides of the argument. I have chosen the 'fact' I wish to believe. It’s up to those who don’t believe a foetus in the womb can feel pain to test their facts and prove that it can’t and that is the issue, it cannot be proven. Science is about testing until the facts are indisputable and absolute. There is enough evidence to suggest a baby could feel pain, pretty compelling actually, for me to be of the opinion that if there is any element of doubt, shouldn't the decision whether or not to abort at 20 weeks be a value based decision? If the scientific evidence either way cannot be proven 100% we have to ask what kind of society are we?[12]

In 2011, Dorries attempted to introduce legislation to make it required that teenage girls, but not teenage boys, be taught abstinence as part of their sex education courses.[13] Sayeth Dorries:

The answer to ending our constant struggle with the incredibly high rate of teenage sexual activity and underage pregnancies lies in teaching our girls and boys about the option of abstinence, the ability to 'just say no', as part of their compulsory sex education

This is in spite of numerous and repeated demonstrations of the inefficacy of abstinence-based education programme.

Dorries' ideas about abstinence are so out of whack that the usually wingnut Daily Mail actually described her as a "sexist dinosaur" on the issue and said she should "talk to organisations that work in this field about what actually works, instead of imposing her ideology."[15]

Dorries has had a traumatic relationship with the Internet and social media. She has a blog which does not permit comments and is, by her own admission, "70% fiction."[16] She was obliged to remove the House of Commons' portcullis logo from her blog following a complaint from the Liberal Conspiracy blog.[17][18]

In 2010, Dorries publicly attacked a disabled woman living in her constituency who had posted over 35,000 tweets, saying she should not get benefits.[19] In Dorriesland, disabled people should be sitting and feeling sorry for themselves and not taking the piss out of Nadine Dorries on Twitter.

In 2012, following the drubbing that the Tories took in the local election, Dorries attempted to argue that the Government ought to drop plans for equal marriage for LGBT people. She even at one point claimed that she's never met a gay person who wants marriage equality.[20] (This may be because she doesn't make a habit of meeting gay people, or they might be a bit too polite to bring up the touchy subject of marriage with someone who had an affair with a married man.)

Dorries or one of her staff attempted to edit Wikipedia from Parliament to hide her insane claim that her abstinence education plan would help reduce child sexual abuse.[21][22]

Most disturbing is the attitude Dorries takes to her critics: branding critical bloggers like Tim Ireland from Bloggerheads.com as "stalkers."[23][24] By reading this article, you have joined the conspiracy and are now stalking Nadine Dorries. Congratulations.

Dorries also claims that her great-grandfather George Bargery founded St. Domingo's FC which later became Everton FC and was the clubs's first goalkeeper in September 1888[25] although most published histories of Everton inexplicably fail to include these facts and even go so far as to suggest that St Domingo's was founded by Rev. B.S. Chambers and church organist George Mahon, that the the club's first game as Everton was in 1879 and that the green jersey on that occasion was worn by W. Jones.[26] However local newspaper reports do show that he played in goal during the Lancashire Cup match against Great Lever, and played 10 times in goal, not conceding any goals.

Despite being considered a social media darling, she's not very forthcoming when it comes to answering questions on Twitter.[27]