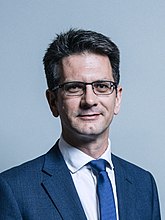 Steven John Baker (1971–) is a British Conservative politician, and a prominent nationalist, climate change skeptic, and critic of COVID-19 lockdowns.

As a key figure in the European Research Group of Conservative MPs, he advocated for the hardest possible Brexit. He was also a leader of the Covid Recovery Group which called for a swift end to COVID restrictions. Most recently he has been involved with the Net Zero Scrutiny Group, trying to argue for minimal reductions in greenhouse gases.

His webpage bears the slogan "enjoy freedom responsibly".[1] There is little sign of him enjoying anything, or being responsible, and he's constantly complaining about not being free.

Born in Cornwall in 1971, he is MP for Wycombe in Buckinghamshire, England. Surprisingly he is one of the few Conservative MPs with a science-related background, although it should be noted he was an engineer, a profession often associated with strange ideas. He was an Engineer Officer with the Royal Air Force before switching to commercial IT, including for financial services firm Lehman Brothers,

See the main article on this topic: European Union

According to right-wing think tank the Institute of Economic Affairs, he has described himself as the "hard man of Brexit".[3]

He advocated for the UK to leave the European Union (EU), forming pro-referendum group Conservatives for Britain in 2015. This was followed by a leading role in the European Research Group (ERG) after the 2016 Brexit referendum decided Britain should leave the EU. In 2017 Baker and the ERG were criticised for misdirecting government money meant for MPs' office expenses to fund the ERG.[4]

Under Theresa May he was a minister in the Department for Exiting the European Union, but he resigned in July 2018 after claiming May's negotiated agreement would leave the UK too close to the EU, and he returned to the backbenches to advocate for less contact with Europe.[5]

He has a long history of opposition to environmentalism and action to tackle global warming. He attacks most green measures as "anti-human life on Earth in the name of environmentalism", and has suggested there is no short-term danger from an ever-heating earth producing storms, fires, rising sea levels, and changing climate patterns.[6] He has claimed that the worst case predictions about climate change are "infinitesimally likely" in which case "you just don't do anything about it because it won’t happen".[6] Again this goes against what scientists say, with IPCC reports splattered with phrases like "virtually certain" and statements like "due to relative sea level rise, extreme sea level events that occurred once per century in the recent past are projected to occur at least annually at more than half of all tide gauge locations by 2100 (high confidence)".[7]

He is a big advocate for fracking, and believes Britain's energy policy should be based around lovely warm gas oozing from the ground.[6]

He also opposes measures to encourage farmers to protect the environment, and opposes animal conservation.[6]

In April 2022, he was criticized for sharing on Twitter a paper by the Global Warming Policy Foundation which denied climate change. The paper claimed:

It’s extraordinary that anyone should think there is a climate crisis. Year after year our annual assessment of climate trends document just how little has been changing in the last 30 years. The habitual climate alarmism is mainly driven by scientists’ computer modelling rather than observational evidence.[8]

This goes against the vast majority of scientific opinion from the Intergovernmental Panel on Climate Change (IPCC) and other distinguished organisations.[8]

Along with another Tory MP, Craig Mackinlay, he formed the Net Zero Scrutiny Group, designed to argue that net zero is a dangerous concept and we should keep emitting greenhouse gases. They claimed not to be climate change skeptics, but said measures such as imposing a levy on fuel to fund home insulation would cripple the economy, even though in the long term insulation would save many families lots of money, as well as reducing emissions.[9] He wrote in The Sun newspaper that "the cost of Net Zero could deliver a political crisis greater than the Poll Tax".[10] He didn't say whether this is "infinitesimally likely".

He was criticised for his stance on the environment by other Tory MPs, including Chris Skidmore who set up a Net Zero Support Group, although it doesn't seem to have got as much press attention.[9]

He was a regular voice calling for COVID restrictions to end. In June 2021 he claimed further lockdown measures would eliminate all the things that "make life worth living" (pubs, discotheques, and pro wrestling, presumably).[11] According to the Guardian, he was not a complete skeptic of the existence of COVID, but took a libertarian position that COVID restrictions were a grave infringement on individual freedoms.[12] Yet despite his talk of liberty with respect to COVID, he has otherwise supported Conservative clampdowns on human rights, the freedom to protest, etc.[13]

He was active in the Covid Recovery Group, an organisation of 50 to 70 MPs which opposed further restrictions after autumn 2020.[14]

As an MP, They Work For You notes his support for:

His record on LGBT rights is mixed, with some votes for and some against. But he did support higher taxes on air travel.[15]