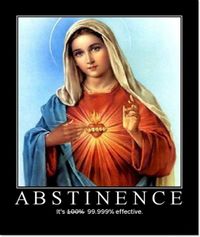 One may notice that the many of the most vocal advocates of abstinence, being socially conservative, have "traditional" views of gender relations and believe that the abstinence programs should be aimed, mostly, at women. This is because men seeking sex are often seen as "Boys being boys",[note 1] whereas it is supposedly the women's "place" to refrain from sex. This often leads to sexual women being demonized as a "means to an end", the end being scaring other women away from the idea of sex, whereas sexual men are often let off the hook or, at the very least, not being penalized/shamed to the same degree.