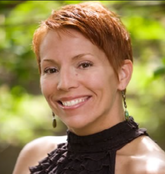 Nasha Winters is an American acupuncturist, naturopath, anti-sugar campaigner and low-carb advocate who promotes the ketogenic diet as a therapy for cancer.

Winters has no scientific medical training. She received her Doctorate in Naturopathic Medicine from Southwest College of Naturopathic Medicine in 2003.[2][3] Winters believes that cancer is a metabolic disease.[4] She operates the website DrNasha.[5] Winters is the co-author of The Metabolic Approach to Cancer, published in 2017.[6][7] She thinks that cancer is fuelled by high carbohydrate dieting and that people should avoid all carbohydrates and go on a ketogenic diet to be cured.[8][9][10]

The idea that sugary foods specifically feed cancer cells is completely wrong,[11] and there is no scientific evidence that a ketogenic diet can cure cancer.[12][13][14][15]