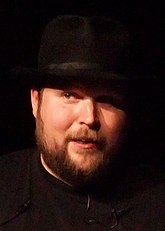 Markus Alexej Persson, better known as Notch, (1979–) is a Swedish video game designer, best known as one of the founders and former owner of Mojang, a Swedish independent video game development company, and the creator of the sandbox game Minecraft.

His actions on Twitter have caused him to become a controversial figure, notably for promoting right wing talking points such as "Heterosexual Pride" in July 2017. Then later on in 2017, he made a tweet that parroted a popular alt-right canard, “It's okay to be white.”[1] Notch was also criticized for making comments where he claimed that white privilege is "made up". Notch has also promoted conspiracy theories, notably endorsing QAnon, calling the conspiracy theory "legit".[2] He also made transphobic comments, saying that trans women “aren’t women.”[3] Ironically, Notch defended adults who eat their own boogers by saying "Does it affect you?"[4] Many of his statements eventually got all but one mention of him in the game Minecraft removed.

Notch was born on June 1, 1979 in Stockholm, Sweden. His mother was Finnish and his father Swedish. He grew up in Edsbyn but his family moved back to Stockholm in 1986. Notch bought a large mansion in Beverly Hills, U.S. for an area record $70 million in December 2014.

Professionally he had worked as a game developer for King from 2004 to 2009, then as a programmer for Jalbum. He was involved in the founding of Wurm Online, and Minecraft which he is best known for.

He married Elin Zetterstrand on August 13, 2011, but by August 15, 2012, he was single again. Notch is a member of the high IQ society Mensa, is an atheist, a principal donor to Médecins Sans Frontières, and a member of the Swedish Pirate Party.

Notch has become involved in making racist posts on social media, such as "It's okay to be white", which is a white nationalist dogwhistle. Conflicting with this white supremacist behaviour, Notch has declared as recently as 2020 that the default Minecraft avatar, Steve, is supposed to be of ambiguous race, and that he had no race in mind while designing the character.[5]

Bizarrely, Notch followed this tweet up with another, adding "by a photographer", implying that this was an (albeit in poor taste) joke, only to follow THAT tweet up with another finishing it off with the statement "with a gun". It's unclear whether Notch was trying to make an incredibly unfunny joke or unironically suggesting that people against Heterosexual Pride Day deserve to be shot for opposing such a pure and innocent movement.

In addition, Notch has made many transphobic comments on Twitter.

Of note is that, according to Notch himself, before his turning out to be a complete monster, gender in Minecraft is purposefully nonexistent, all characters and entities in the game are therefore homosexual, and he added on how he was trying to use the singular "they" to refer to the default playermodel, Steve.[8]

Because of course someone like him would get involved in Gamergate somehow. Notch got involved in a slapfight against Zoe Quinn on Twitter back in 2017,[9] responding to a tweet by Quinn lamenting the events of the movement by politely and eloquently calling Quinn a "fucking cunt". When he got called out he doubled-down and continued to throw the word around like a 10-year old who had just learned the word for the first time. When he eventually found out who he was harassing, he attempted to backpedal while also continuing to stand his ground and affirm that he was in the right.

As for his actual alignment in the controversy, it's hard to tell. While he claims to be against it and in support of those harassed, he's also quick to go after any perceived "SJWs" with wild abandon.

See the main article on this topic: QAnon

Of course, one can't talk about Notch without bringing up his biggest claim to fame, his magnum opus: Minecraft, a sandbox survival game where players explore a blocky environment to build tools and/or create grandiose structures. Originally released to the public on May 17, 2009, it rapidly grew in popularity and eventually grew to become the best-selling game of all time,[12] surpassing even the likes of Tetris and Grand Theft Auto.

Though for the most part the game itself has been without much politically charged controversy, it has indeed been caught in the crossfire in recent years thanks to the way its creator has acted.

In March 2019 Microsoft, which had bought Minecraft's parent company Mojang

in 2014, removed almost every reference to Notch from the game,[13][14] save for his recognition as the creator in the credits. Of course, since people never look into things first before making wild assumptions, people immediately assumed he had been deleted from the game outright, causing accusations against Microsoft and Mojang for supposedly removing the true creator over "minor political differences".

Similarly, in 2018 it was announced that JAPPA, the game's main artist, would be going over all the textures in the game and redoing them, in order to create a more consistent and fluid art style. The original textures would still be available as a texture pack called "Developer Textures"[note 1] but after the textures were officially released, they would become the default look of the game from then on.

Now, any reasonable person would assume this was a decision made to keep Minecraft fresh and exciting in order to keep up with the evolving competition. Cranks, however, immediately accused Mojang (or Microsoft, depends on which crank you ask) of trying to erase Notch from the game entirely… even though the original textures still exist and are free to use. This one died about as quickly as it appeared.

Things escalated further when Microsoft made a statement that Notch would not be invited to Minecraft's big 10th year anniversary celebration.[15] At the time of writing, Notch has yet to make a public statement.

Much like his own creation, Notch is what one would refer to as a "blockhead". It's also important to note that being the creator of a great game doesn't make you a great person, as Notch excellently demonstrates.