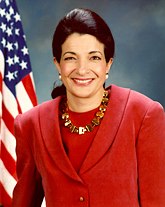 Olympia Snowe (born 1947) is a former Republican Senator, serving from 1995 to 2013. Representing Maine, Snowe generally holds socially liberal views and is moderately conservative in fiscal matters.[1][2] Like fellow Senator from Maine Susan Collins, she was very bipartisan and for that reason was known as one of the most moderate of Republicans in the Senate.[3] Centrism and moderation are rather rare at a time of heightened political polarization. In light of what the modern Republican Party has become, Snowe is a Republican in name only. She is pragmatic and reformist rather than dogmatic and reactionary. Although she may not be the most progressive of politicians, she welcomes change for the sake of social harmony and stability, lest the masses become so downtrodden they are prone to seduction by radical factions.[note 1]

Snowe was born February 21, 1947 in Augusta, Maine, to two Greek immigrants. She lost her mother when she was nine, and her father when she was ten, after which she was raised by her aunt and uncle with their five children. She graduated from the University of Maine in 1973.[4]

Snowe was elected to the Senate in 1994, becoming the second female senator to represent Maine. Before her election to the Senate, Olympia Snowe represented Maine’s Second Congressional District in the House of Representatives for sixteen years. Senator Snowe was only the fourth woman in American history to be elected to both houses of Congress and the first woman to serve in both houses of a state legislature and both houses of Congress.[5] For ten years, she co-chaired the Congressional Caucus for Women’s Issues, which focused on various issues important to women, including family medical leave, child support payments, and inclusion of women in medical trials.[5] She obtained bipartisan support on issues such as the Child Tax Credit and the Genetic Information Nondiscrimination Act, which has been called the “first civil rights bill of the 21th century.”[5]

In 2001, Snowe became the first Republican woman ever to secure a full-term seat on the Senate Finance Committee, and only the third woman in history to join the panel. She was also a member of the Senate Committee on Commerce, Science and Transportation, and is the former Chair and Ranking Member of its Subcommittee on Oceans, Atmosphere, Fisheries and the Coast Guard. Prior to her service on the Finance Committee, Senator Snowe had been the fourth woman ever to serve on the Senate Armed Services Committee, where she was the first woman Senator to chair the Subcommittee on Seapower, which oversees the Navy and Marine Corps.[6]

In 2003, she voted against a bill by Rick Santorum restricting abortions, which angered the more conservative wing of her party, as did her support for human embryonic stem cell research. As a matter of fact, she praised President Barack Obama for lifting the ban on the subject in 2009.[7]

In 2009, Snowe broke party lines and voted in favor of President Obama's massive economic stimulus package of over 800 billion dollars.[3] In the following year, she was one of the few Republicans to voted for the Dodd-Frank financial regulatory reforms and the creation of the Consumer Financial Protection Bureau.[7]

In 2010, she was one of eight Republicans who voted to repeal the "Don't ask, don't tell" policy, effectively lifting the ban on LGBT individuals in the Armed Forces.[8] Although she supported the Defense of Marriage Act in 1996, she voted against proposed constitutional amendments defining a marriage to be between a man and a woman twice.[7]

On 28 February 2012, the moderate Snowe announced that she would not seek re-election in 2012, citing "an atmosphere of polarization and 'my way or the highway' ideologies" that had become inherent in Congress, particularly in the Republican Party.[9] She was concerned that such an atmosphere was not going away anytime soon (and indeed, it didn't), and Congress was behaving more like a parliamentary system, where one group meticulously seeks to undermine the other side by whatever means possible, even though the willingness to compromise and bipartisan thinking are, in her view, signs of strength. Only by finding common ground can progress be made in such a politically diverse nation, she wrote.[10] Shortly after retiring, she announced that she no longer favored the Defense of Marriage Act.[11] This seems to be the natural course of her evolution on the subject of gay rights.

The announcement came as a benefit to Democrats in the 2012 senatorial race, as previously they were faced with the prospect of losing four seats to lose the majority in the Senate.[citation needed]

During the 2016 U.S. Presidential Election, Snowe was one of the many Republicans who vocally voiced their disapproval of then-candidate Donald Trump.[12] What makes this particular election noteworthy is the Republican Party's hemorrhaging of popular support, including among (well-educated) women, without whom their political future is bleak,[2] even though they prevailed and came to dominate all three branches of government in 2016.

In 2018, in her Crown Lecture in Ethics at the Sanford School of Public Policy, Duke University, Snowe pointed out some of the major problems facing the United States Congress today. Besides an unhealthy amount of political division, Congress has failed to tackle the rising economic inequality that has been taking its toll on the nation, curtailing growth. Members of Congress are spending way too much time campaigning and not enough time running the country. She characteristically urged her audience to compromise and to accept that they will not have "a monopoly on all the good ideas."[5][note 2]