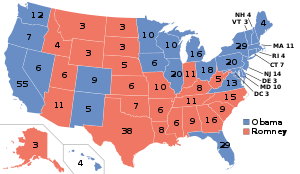 Obama was sentenced to four more years as president. The poor man.
Were you looking for the 2012 apocalypse?

Romney promised to buy more ships, Obama believed we had enough ships. That was literally their only disagreement.

The years leading up to the 2012 election were an absolute economic shitstorm that helped lead to a Democratic landslide in 2008, growing worse with the eurozone crisis.

Contrary to every election over the past 60 years, the Republicans couldn't attack their opponent for being "soft" on national security. The reason being that Obama was one of the most hawkish Democrats, with major victories such as the killing of Osama bin Laden. Combined with the increasing dislike of the Afghanistan War in the public and its future end date, foreign policy was not a major issue, unlike previous elections.

Social issues are often more important when the economy is healthy, and white Christians can go back to telling other people how to live. Romney, a former social liberal, once claimed to be more for gay rights than Ted Kennedy but later edged himself to the right on social issues.

The major provisions of Obamacare would not come into effect until 2014 and a major SCOTUS case that could help define how people view his strength as a president, ultimately upheld the law in a 5-4 decision.

Romney passed a very similar health care bill while governor of Massachusetts. During the health care debates of 2009-2010, he strongly advocated for such a system to be instated nationally, making it difficult for him to attack the President's own health care plan. (Republicans still hate him for that.) Of course, this didn't stop Romney from criticizing Romneycare Obamacare and hoping nobody noticed.

No notable Democrats came forth to challenge Obama for the nomination, although anti-abortionist Randall Terry, formerly active in the Constitution Party and who had also run for office as a Republican, entered the Democratic primaries against Obama mainly in order to run graphic pro-life ads.[5] He ran strongest in Oklahoma and carried several counties. Likewise, a handful of other obscure primary candidates had strong showings and carried a number of counties in Arkansas, Louisiana, and West Virginia. One such candidate, convicted felon Keith Judd, got a whopping 40% of the West Virginia primary vote and won 10 of the state's counties – all while serving a 210-month sentence in federal prison in Texas.[6] "None of the above" ran strongly in Alabama and Kentucky. But those are all states where Obama is unpopular among some rank-and-file Democrats, many of whom are social conservatives, and there were no serious threats to his renomination.

No one actually liked him, although his programmers have learned well how to simulate human emotion.

Romney never really captured the hearts of the Republican faithful. His eventual defeat was the deathrattle of the Neocon/"establishment" wing of the party, allowing the gibbering lunatics to take over. His massive war chest, however, meant that his eventual triumph in the primaries was never in doubt. Starting in the summer of 2011, a number of fringe candidates enjoyed a few weeks as the frontrunner: Michele Bachmann, Rick Perry, Herman Cain, Newt Gingrich, and even Rick Santorum positioned themselves as the "not-Romney" of the moment. Of the challengers, Ron Paul, with a fervent base of followers disconnected from GOP orthodoxy, survived the longest; he never actually suspended his campaign for some reason.

There were several candidates attempting to win the Americans Elect nomination which was to have been conducted entirely online. On May 15, 2012, Americans Elect announced they were declining to nominate anyone, declaring no candidate had met the threshold for support.[9]

In general, the problems with Romney had to do with who he was, not how he campaigned. In 2012, the scars of the recession were still fresh, and a guy whose net worth was $250m and who had come up through Bain Capital was going to be a hard sell regardless. Add to the fact that his career up to that point had been as a centrist governor in a blue state, and his positions were closer to Pelosi's than Boehner's.

Romney campaigned relatively well, with no major missteps aside from the 47 percent thing. But he just wasn't the kind of candidate that was going to beat Obama in the first place. He changed his position multiple times on social issues, and much of his campaign relied on the assumption that the economy would stay stagnant. Because of how complex the economy is, this essentially left his campaign up to chance, which can be a major problem.

Adding insult to injury, he had conspicuous bank accounts in several tax havens and was sitting upon years of tax returns. While he did release summaries of the other years, none of these disclosed his effective tax rates, a major sticking point against his campaign. While VP nominees usually "balance out" a ticket (like a fiscal conservative running with a religious conservative), Ryan spelled doom for votes in (at least) Florida[11] as he was a former Randroid and wasn't particularly known for his social conservatism either, therefore costing Romney 29 crucial electoral votes. His proposal to voucherize Medicare wasn't popular across the political spectrum;[12] Romney's plan for Medicare was nearly identical as well.

And never — ever — try to make "we are the 53 percent" a talking point. And defunding PBS.[13] And pissing off the entire United Kingdom.