The doctrine of signatures was a concept developed in ancient Europe that claimed that plants advertised their usefulness to humans and animals by looking like the things they aided. In addition to the plants looking like human body parts, animals or other objects, the doctrine of signatures could also refer to the environments or specific sites in which plants grew.

The doctrine of signatures and Christianity[edit]

Late medieval Christian theologians embraced the concept as a natural extension of the idea that the Creator carefully ordered his creation such that careful observation would reveal useful information about the plant. Walnuts that looked like the cranium would be used for headaches, or beans that looked like livers would cure liver problems. Beyond medical applications theologians extended this concept to plants representing all the right doctrines of Christianity. This is most aptly seen in the Passionflower (Passiflora incarnata) whose symmetry and numerical elements were said to be representative of Jesus Christ's passion. 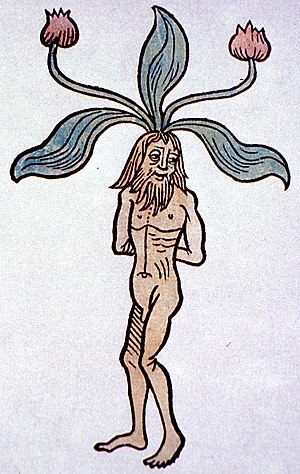 Mandrake (Mandragora spp.), whose roots sometimes contain bifurcations causing them to resemble human figures showing off their legs, in Hebrew is "love plant". There are classical Jewish commentaries which suggest that mandrakes help barren women to conceive a child.[2]

The doctrine of signatures and homeopathy[edit]

Homeopathy has often called upon the doctrine of signatures for finding potential herbs to use in their cures. Despite its complete rejection as a valid theory for classification of plants or their properties and uses in medicine, many homeopathic and other "natural" practitioners still use the concept today.

Some examples of plants and their "uses" based on the doctrine of signatures: