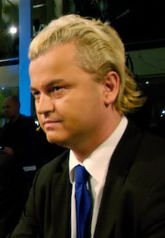 The Party For Freedom (Dutch: Partij Voor de Vrijheid, or PVV) is an ironically named populist right-wing political party in the Netherlands, founded and led by Geert Wilders. The party is known for its harsh anti-immigration policy, anti-Euro stance, expressions of Islamophobia, and climate change denial. The PVV currently holds 20 of the 150 seats in the Dutch Lower House, and 1 in the European Parliament.

It's difficult to tell where "Geert Wilders" stops and the PVV begins. Wilders is the sole member of the party, and sets all policy (unlike other parties, where such processes are more democratic). It was originally named Group Wilders.[2] Stating that "PVV's views on ..." and "Wilders' views on ..." are usually, but not always, equivalent.

The PVV doesn't like Islam, Muslims, or pretty much anything from the Middle-East, except Israel. According to them, Islam is not a religion, but a fascist ideology of global conquest[3], which means that according to Wilders, it is not protected under the Dutch constitution's freedom of religion. Wilders repeatedly compares the Qur'an to Mein Kampf.[2] He does not accept any distinction between Islam and Islamism, and says there is 'no moderate Islam'.[4] The PVV's views on Islam are pretty much fractally wrong.

One of the most repeated claims is that the Netherlands (and Europe in general) is enduring a "tsunami of Islam" and is quickly undergoing "Islamification"[5] This is just plain wrong; about 4% of the Dutch population is Muslim[6], and most of those are of Turkish or Moroccan descent[7], not of Arab decent. Of those 4%, only about 50% regularly visit a religious service.[8] Furthermore, the absolute number of Muslims decreased in the Netherlands since 2004,[6] which some people of course deny by sticking their head in the sand and say this a politically correct conspiracy, or something or the other.[9][note 1] To be fair, there is some regional variation, with some provinces going as low as 0.5%, others as "high" as 7.4%, and Amsterdam being as high as 17%, but this hardly a "tsunami", and there is not that much growth, and unlike some other imported religions, at least Islam doesn't have door-to-door preachers.

Its name notwithstanding, the PVV wants to impose all sorts of restrictions on Islam such as an immediate stop on all migrants from majority-Muslim countries (advocating a ban on individual Muslim migrants would be illegal). The irony that this would mean preventing Christians, Jews, agnostics, or atheists who might be persecuted in majority-Muslim countries from seeking refuge in the Netherlands must be lost on Wilders. They also want to restrict the practice of Islam in the Netherlands, by banning the Koran, and closing (and banning) all Islamic schools ("fascist institutions"[3]), and mosques.[10] The party also wants a ban on Sharia law.

In the ongoing refugee crisis the PVV is calling to "close the border" and calls refugees "the downfall of the country."[11]

Wilders, meanwhile, dubbed the male refugees "testosterone bombs" "threatening our girls",[12] which his colleagues in Parliament did not much appreciate. In that same speech, he also termed the Dutch House of Representatives a "fake parliament"[12] and thought he himself was the only true representative of the Dutch people. Labour Party (PvdA) member Jan Vos stated on Twitter that Wilders' speech was "openly fascist"[13]

The PVV pushes strong Euroscepticism, viewing the European Union (EU) as anti-democratic and an infringement to national sovereignty, and wants to leave both the EU and the Euro immediately.[14]

The claim that the EU is anti-democratic is not completely without merit; but it's not that different from most democracies: a parliament is elected every n years, and can then basically do whatever they want. There are many points of criticism one can level at this, but they also apply to national parliaments, since they work the same way. The PVV doesn't really have any valid criticism on this point, but just rants and raves against "European elites" and "Europhiles". In other words, they may be right for the wrong reasons.

Similarly, on the topic of national sovereignty the PVV mostly just complains about the EU's immigration directives, leaving the door open to evil Muslims looking to kill freedom or because the economy suffers due to CO2-emission laws. There are almost no argument of intellectual value, even though they do exist, and have been put forward ... by other people.

One must also wonder if leaving the EU is the most constructive approach to these problems... 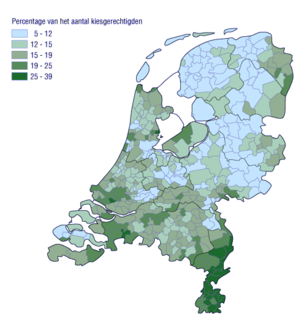 PVV's supporters are typically working- and lower-middle-class white voters, without a university education.[note 2] The party has strong support in the southern province of Limburg, where Wilders was born,[note 3] and more generally in the Catholic south of the Netherlands. Support is lower in the north, but high in the north-east corner, which is the poorest part of the country, and a former stronghold of Dutch communism. In the large cities support for Wilders is also strongest in low-income areas, where he took votes from the Dutch Labour Party.

Wilders appeals mainly to 'poor white' voters, who feel betrayed by the mainstream parties, and feel the country is being sold out to immigrants, especially Muslims. Wilders' supporters are very active online, on blogs, news sites, and forums. Their tone is aggressive, and opponents of Wilders are subjected to abuse and death threats. Hardcore supporters have compiled death lists of multiculturalists, including politicians (such as former Prime Ministers Dries van Agt and Jan Peter Balkenende, as well Job Cohen, Piet Hein Donner and the late Hans van Mierlo), journalists, and former Queen Beatrix (and now her daughter-in-law, Queen Máxima, too).[16]

Unlike most American right-wing populists, Wilders is pro-gay, often more so than mainstream LGBT organisations: if homophobe immigrants harass gays, Wilders wants to punish not just the perpetrators, but their entire family. (Sound familiar?) He undoubtedly has support among Dutch gays and lesbians, but there are no poll figures. Although he is an atheist, he has also attracted some evangelical Christian voters, who value his defence of Christian minorities in Muslim countries and support his efforts to marginalize Islam.

The Freedom Party does not disclose its funding, but media reports suggest it comes mainly from the United States, and especially from conservative Jews.[17] Former allies who broke with Wilders speak of 'suitcases with cash' from the US. Wilders was promoted in the US by anti-Islam blogger Pamela Geller, and has made several speaking trips to raise funds, including a speech at a Florida synagogue[18] at the invitation of the Republican Jewish Coalition. The neoconservative David Horowitz Freedom Center raised $75,000 for him.[19] Daniel Pipes has also raised funds for him.