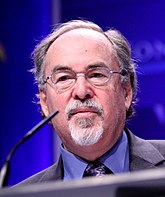 Horowitz in 2011.
Not to be confused with David Horowitz,

the consumer advocate who once played himself on The Super Mario Bros. Super Show being attacked by a sink clog creature.

David Joel Horowitz (1939–) is a former figure in the New Left who turned batshit arch-conservative.

A "red-diaper baby," Horowitz edited the New Left magazine Ramparts from 1969 to 1975. He subsequently renounced his leftist past and became a far-right conservative.

He made a bit of a name for himself in the 1990s with a memoir, entitled Radical Son: A Generational Odyssey, about how his Stalinist parents did everything but skin him alive as a child, how left-wing politics are nothing but a false religion, and how in consequence it is perfectly reasonable to align oneself with the looniest fringe of the Republican Party (usually the screaming lunatic fundamentalists who badger the hell out of women at abortion clinics and otherwise make their positions untenable). His memoir has a fair share of rants against entitlements, Affirmative Action, and other programs to help the poor.[1]

Horowitz insists his "conversion" was caused by the unsolved murder of Betty Van Patter, an accountant he had recommended to do bookkeeping for the Black Panthers,[2] with whom he was aligned. After Van Patter looked at the ledgers and brought discrepancies to the attention of Panther Chairwoman Elaine Brown, she went missing, and her body later was found with her head bashed in on the shore of San Francisco Bay. Horowitz and others have claimed that the Panthers did it,[2][3] but there never was a conviction. Art Goldberg, Horowitz's long-time and by then-former friend, accused Horowitz of putting Patter into a dangerous situation and thereby bearing some of the responsibility for her death.[2]

One of David Horowitz's pet peeves has been the long-standing issue of historical reparations for slavery. If his criticism was based on costs or on the fact that no one currently alive was directly involved with slavery in any capacity, he might have gotten away with it. Instead, we got the same logic-twisting that made Booker T. Washington anathema to the Civil Rights movement in Horowitz's anti-reparations argument, "Ten Reasons Why Reparations for Blacks is a Bad Idea for Blacks-and Racist, Too":

In layman's terms: "Slavery made us money and slaves' living conditions were slightly better than what they'd have been otherwise, so you should thank your plantation owners for giving you any wages at all."

Horowitz anti-reparations rationale originally appeared in his own FrontPage Magazine in January 2001. He then tried to place it as an advertisement in college newspapers across the US in March 2001.[5] Many newspapers rejected the ads, as they are entitled to do, those that did run the ads faced backlash from students who called the text racist or hate speech.[5] Curiously, "Ten Reasons" was subsequently scrubbed clean from FrontPage Magazine and the Internet Archive,[6] both in 2013 or later. The entire FrontPage Magazine is now scrubbed and excluded from the Internet Archive.[7] Horowitz apparently doesn't want people to know that he's been doing things he regrets his entire life.

The "David Horowitz Freedom Center" (DHFC)[8] is Horowitz's vanity think tank that exists largely as a vehicle for Horowitz to spread Islamophobia and combat "liberal academia." The DHFC runs a number of projects, most notably publishing the conservative FrontPage Magazine.[9] The magazine started out as a more aggressively-conservative version of The Weekly Standard, but in more recent years has morphed into Stormfront-lite, takes a rabid anti-Islam editorial stance and publishes other miscellaneous wingnuttery by the likes of Ann Coulter, Daniel Pipes, and Melanie Phillips. Its more recent pundits Bruce Bawer, Daniel Greenfield, and Jamie Glazov have dropped any semblance of subtlety and frequently display overt racism and borderline neo-fascism in their screeds. The DHFC runs "Students for Academic Freedom",[10] and Discover the Networks,[11] a site allegedly keeping tabs on the "loony leftists" giving cover to the Jihad Johnnies and other assorted radicals. The DHFC has also taken aboard Robert Spencer of Jihad Watch fame.[12] Spencer's Islamophobia is so virulent that it's too wingnutty even for Dinesh D'Souza![13] Then-Representative Ron DeSantis, who became Florida governor in 2019, spoke at the center's conferences on four separate occasions.[14] DeSantis also used a racist dogwhistle in his campaign.[15]

Horowitz has been pushing his deceptively named Academic Bill of Rights (ABOR)[16] for quite some time. In one instance, his McCarthy complex managed to spark an investigation into Pennsylvania's higher education system. However, the investigative committee found that Horowitz's charges were overblown and that he had failed to document the widespread "indoctrination" he claimed existed.[17][18]

In 2006, Horowitz published The Professors: The 101 Most Dangerous Academics in America,[19] which targeted many professors who supported Palestinian rights.[20]:38 In 2009, he published One-Party Classroom,[21] which listed 150 courses that he considered dangerous.[20]:38 These books, in addition to his Students for Academic Freedom astroturf group were sufficient for the Trump White House to support his agenda and include at least 11 past or current members of DHFC in its administration, including Mike Pence, Jeff Sessions, Steve Bannon, Stephen Miller.[20]:38-41[22] Horowitz even regards Miller as his protégé.[22] While Horowitz has attacked the alleged lack of free speech at universities,[22] the reality is that US universities are the "freest domain of expression in any workplace" since many other types of workplaces force their employees to sign non-disclosure agreements as a condition of employment.[20]:41 Intellectually dishonest wholesale attacks on academia, as Horowitz has engaged in, is a common tactic of fascism.[20]:36