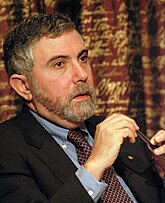 The Krug shrugs and thinks, "ugh".

Paul Krugman (born 1953) is a Nobel Prize-winning economist and columnist for The New York Times. He is a social democrat who favours global free trade and criticized the Obama Administration for crafting an economic stimulus bill that was too modest to be effective. He opposes farm and ethanol subsidies and populist protectionism (of the sort espoused by Lou Dobbs and Pat Buchanan) and is a fierce critic of supply-side economics. Conservatives, of course, view him as a dirty hippie who wants to give free steaks to the Greeks mouthpiece for the liberal socialist agenda.[1] American libertarians also seem to believe he's the devil incarnate, to the point two of the foremost libertarians (Tom Woods and Rob Murphy) devote a show to "debunking" (read: repeating Austrian school garbage) his NYT op-eds. He gets most of his facts right too.[2] Unfortunately, while an economic expert, he is not the best at public speaking, once even losing in a debate with Ron Paul because he was unable to respond properly on live television.[3]

Some people with their sarcasm detectors turned off believe that Krugman is insane because of a 1978 paper he wrote on "interstellar economics." This is actually a parody if you can't tell after reading the first few lines.[4] It is generally agreed upon that cranky Krugman is the best Krugman.[5][6]

As of 2014, he's become a de facto top economic policy advisor for Japan as it tries to lurch out of its Lost Decade.[7] So, you know, good luck.

He also believes inflation is good.[8]

As he's known for being one of a few economists to foresee the Great Recession, Krugman has become a victim of quote mining in recent years. Take this:

Krugman was never advising the Fed to create the bubble, or saying it was a good idea.[9] But he was making a (unfortunately correct) prediction about how Greenspan would try to "fix" his mess.[10]