From RationalWiki
(Redirected from Tumor)
Jump to: navigation, search 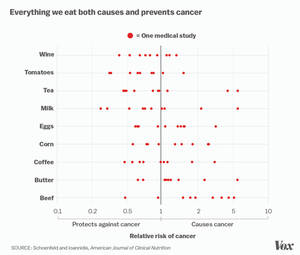 Everything you eat causes cancer and prevents it! (Source)

Cancer is an umbrella term for a class of diseases in which cells grow uncontrollably and spread throughout the body.[2] Cancers are classified by the type of tissue and location in the body in which they originate,[3] though a cancer may spread (metastasise) to tissues other than those in which it originated. Cancer may be treated medically with surgery, radiation, and chemotherapy.

Cancer sucks. The people who seek to profit from desperate cancer patients and their families by offering fake "cures" also suck.

Due to the fear inspired by the disease, its victims are especially susceptible to charlatans. The number of quack treatments for cancer grows much faster than the number of real treatments. Purveyors of quackery are not limited to treatments tested scientifically, which significantly speeds the marketing process.

Cancer isn't a new thing. It's described as far back as antiquity in humans,[4] and it's been found at least as far back as the dinosaurs in animals.[5][note 1] And like many things in history, its origins have not been well understood. It has been attributed to countless (wrong) things — and still is in woo-land.

Apoptosis causes orderly cell death that enables phagocytes to clean up the dead cell before it damages neighboring cells.[8] The process of apoptosis is encoded in genes within DNA; if those genes fail, the cell may not die, and instead will continue reproducing itself. Defective apoptosis is a major causative factor in cancer.[9] Carcinogens — substances that cause cancer — basically fall into five categories:

. This has only been documented to occur in 4 species: Tasmanian devils (Devil facial tumour disease

), Syrian hamsters (Mesocricetus auratus), and soft-shell clams (Mya arenaria).[11] One case of trans-species cancer was documented in an immuno-compromised man with both HIV and cancerous cells from a dwarf tapeworm (Hymenolepis nana).[12][13]

Carcinogens have the potential to damage cells, and more specifically to damage the genes responsible for apoptosis. Carcinogens are unavoidable — they can be naturally-occurring or synthetic — but exposure to them can be reduced in some circumstances (e.g. not getting sunburned).

Regardless of the cause, if the immune system cannot destroy

, the cancer cell will start reproducing chaotically and stop being a productive member of the body. The bundle it creates as it does this is called a tumor, and is made up of fucked-up versions of the local tissue. The first effect is localized tissue disruption. As the tumor grows, it can become a large impediment to the transport of blood and other fluids. Cancer also doesn't always stay where it started. Metastasis is the name given to the process in which a cancer cell falls off the original group, travels through the bloodstream, and attaches elsewhere in the body. This causes destruction and, of particular interest to the patient, potentially requires more treatment in an area that was previously healthy. In many cases, the metastatic cells can do more damage than the original cancer.

An oncologist is a medical doctor specialising in diagnosing and treating cancer.[14]

The field of oncology has made enormous strides in the last 10 years thanks to advances in molecular biology and genetics[note 2] that have allowed for more directed treatments of cancers.

As an example, Gleevec, used in the treatment of chronic myelogenous leukemia (CML) and a few other cancers, was developed as a targeted treatment,[15] an idea inconceivable 30 years ago. The genetic cause of CML was discovered to be a particular chromosomal abnormality, the so-called Philadelphia chromosome.[15] Gleevec specifically inhibits the protein made by this gene.[15] This discovery would be impossible without the discoveries of modern genetics and biology, which in turn are a direct result of evolutionary biology.

When discussing the relationship between abortion, pregnancy, and cancer of women's naughty bits, it is always advisable that the majority of your research comes from and is evaluated by oncologists.

Surgery is the primary treatment modality for most solid tumors.[16] It has the advantage of being potentially curative in cases where the tumor has not yet metastasized beyond its site of origin. Surgery may also be carried out with palliative intent.[note 3] Which surgical options will be available to the patient will depend on the tumor type, the extent of spread (stage), the anatomical site involved, and the patient's fitness to undergo surgery. A particularly common and well known example is mastectomy. The reason why ablation is better is because it is definitive, reliable and other treatments affect the whole body as well as the affected zone.

Chemotherapy refers to the treatment of cancer using chemical agents with selective toxicity towards neoplastic cells. This is a heterogeneous group of agents with a variety of mechanisms of action. Many of the older drugs work by attacking the faster-reproducing tumor cells, by either targeting the cell-division mechanism, or targeting the chemical process of cell division. Some of the newer chemotherapeutic agents target specific molecular alterations in tumor cells. These include small-molecule inhibitors (such as imatinib, targeted to the BCR-ABL fusion protein in chronic myeloid leukemia), and monoclonal antibodies (such as trastuzamab, targeted to the HER2 receptor amplified in subtypes of breast cancer). In the case of most solid tumors, chemotherapy is given as an adjuvant to surgery or radiotherapy, or as part of a palliative care regimen. Chemotherapy alone is rarely curative, with the exception of certain leukemias and lymphomas. Many chemotherapy drugs are either known or suspected carcinogens, so there is also a risk of treatment-related cancer occurring in later years if the original cancer is cured. As chemotherapeutic agents are generally toxic to non-tumor tissue, the dose needs to be carefully titrated so as to maximize treatment effect while keeping side effects to a tolerable level.

Radiation is also a common treatment, and is more often used for localized cancers, such as prostate cancer. Most radiotherapy involves the emission of ionizing radiation from an external source. An alternative treatment is brachytherapy, in which a radioactive material is implanted directly into the tumor mass. Like chemotherapy, radiation is also carcinogenic and there is a risk of treatment related cancer occurring some years after the initial treatment.

There is a fine line between holistic medicine and woo.[note 4] If offered in support of standard medical care, and with the doctor's approval, things like massage, nutritional therapy, acupuncture, yoga, and meditation have been shown scientifically to have a calming effect, to have a restorative effect, and to offer a level of pain management for such chronic illnesses. Even things completely without actual benefit - like crystals, remote prayer, or magnets - might help to calm a patient, and they can do no harm.

It doesn't help anyone that 88% of treatment-related products and services advertised on cancer-care related websites aren't scientifically validated to help with the cancers they claim to.[17] 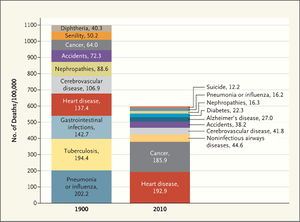 A very common claim is that there are more cases of cancer than ever before because people are now exposed to synthetic chemicals and artificial food additives more often than in the good old days when everyone lived naturally. The main problem with this argument is that the increase can be attributed to longer lifespans; cancer is primarily a disease of old age.[19] In the "good old days", life expectancy was significantly lower. In the 20th century, infectious disease mortality in the United States declined from 797 to 59 deaths per 100,000.[20] Childbirth carried a substantial risk of death, with a maternal fatality rate of over 400 maternal deaths per 100,000 births,[21] compared to 17.4 per 100,000 pregnancies in the US in 2018.[22] Newborns had about as high a chance to see their fifth birthday as newborns today in many African countries. When the incidence of these diseases declined (or disappeared, in the case of smallpox) due to better treatment and prevention, including vaccines and hygiene, the people who were saved went on to live into middle age, when they consequently got cancer. This is what happens when a disease is cured: the people who would have died from disease X go on to live longer, and eventually die of disease Y. There is thus a rise in the number of cases of disease Y, but not because there are more triggers for it. On the chart at right, you can see that there were indeed more cases of cancer in 2010 than in 1900. However, there are many diseases in 1900 that are completely absent in 2010, and the total number of deaths overall is much lower in 2010.

This is in fact a common theme in alternative medicine: hundreds of years ago, people weren't exposed to X, and they didn't get disease Y, and therefore modern cases of Y are because of the new factor X. In other words, correlation is taken to be proof of causation. In a world where cancer were cured, there would be many more cases of Alzheimer's than there are now, and (presumably) many more people would be saying, "People back then lived more naturally and didn't get Alzheimer's. Clearly, this disease must be due to synthetic chemicals," when obviously it's really because during those times of "natural" living, fewer people reached old age, when Alzheimer's strikes. A reversed form of this reasoning may also be used: "Back then, people were exposed to X, and they didn't get Y, so X doesn't cause Y." This may be used by some to argue, for instance, that exposure to the sun doesn't cause skin cancer. Of course, this is fallacious, as can be shown if X and Y are replaced with "tobacco" and "cancer".

Another major problem with this argument is that many of the top causes of cancer — tobacco, alcohol, an unhealthy diet, viruses — are perfectly natural. Tobacco is estimated to account for 25% of all cancer deaths and 86% of lung cancer deaths.[23]

Certainly, this does not mean that pollutants are not carcinogenic, but their effect is relatively small. And the argument also fails to take into account that many pollutants are actually less likely to get into your body today than they were a hundred years ago. Chimneys now have filters, cars run on unleaded fuel and emission standards keep getting tougher. Fewer people work in "dirty" industries and those that do have beautiful clean coal stricter safety rules and better protection than ever before. In Roman times every mine calculated a number of workers to die per given time - and that's before accounting for the effect the dust had on the lungs of workers and all the other things that did them in if they didn't die in one of the frequent cave-ins. Furthermore, science keeps advancing and many substances that were once used with abandon (like lead or DDT) are now banned for almost all uses and many others are phased out.

One of the alleged causes of cancer is the synthetic pesticides found in non-organic food. However, the amount of pesticide left in conventional food when it reaches the store is very small and at a safe level.[24] In addition, organic food also contains pesticides, since organic farmers are allowed to spray pesticides too; the only difference is in the type of insect poison they're allowed to use. This doesn't really help, because natural pesticides are at least as toxic as conventional ones.[25][26]

In his book, More Than Just Comfort: An Answer to Cancer, fundamentalist Christian Ray Comfort recommended never taking pain medicine, and claimed it is better not to be cured of cancer than to go to Hell (i.e., that to accept medical treatment rather than hope for "a miracle cure from God" is to invite damnation).[28] That is some cold, cold comfort.