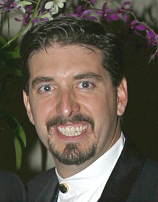 This is what of someone who says he takes POLY-MVA daily looks like: it's Al Sanchez, Jr., CEO of AMARC Enterprises, who distribute POLY-MVA.

Poly-MVA (or Polydox) is a dietary supplement created by Merrill Garnett (b. 1931), a former dentist turned biochemist. Poly-MVA is an ineffective alternative cancer treatment.[1]

The "MVA" in "Poly-MVA" means "minerals vitamins and amino acids".[1] Poly-MVA contains lipoic acid, acetylcysteine, palladium, B vitamins, and other ingredients.[2] The substance is red-brown liquid that is taken by mouth.[1] Promoters of Poly-MVA refer to it as a "metallo-vitamin".[1]

Poly-MVA is promoted with claims that it can treat a variety of human diseases including cancer and HIV/AIDS.[1] The promotional effort is supported by customer testimonials, but there is no medical evidence that Poly-MVA confers any health benefit and some concern it may inhibit the effectiveness of mainstream cancer treatments if used at the same time.[1][2]

In 2005, Poly-MVA was listed as one of the ineffective alternative cancer treatments being sold by the clinics clustered in and around Tijuana, Mexico.[4]