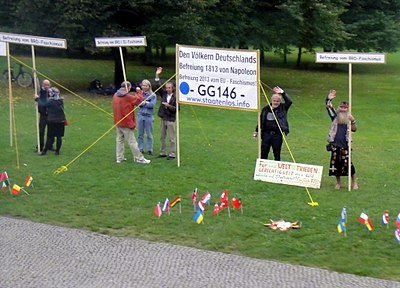 Reichsbürger protesters in Berlin, 2013. The larger of the signs says, in German: "The peoples of Germany: liberation 1813 from Napoleon, liberation 2013 from EU-fascism!"
The "GG" there does not stand for Gamergate; it stands for Grundgesetz ("Constitution", in German) and references article 146 of it, which confirms the legitimacy of Germany.[1]

A Provisional Imperial Government (PIG; German: Kommissarische Reichsregierung) or the movement of the Reichsbürger (German: Citizens of the realm) is composed of organizations and groups that claim that the modern German state, also known as the Federal Republic of Germany, is an illegitimate state within the historical territory of Germany, and the German Empire, or Second Reich (German: Zweites Reich, "2nd realm") should be restored, along with the house of Hohenzollern (the last ruler of this house was Wilhelm II, Kaiser of Germany and King of Prussia) ruling it.

In practice, many Reichsbürger tend to be neo-Nazis and/or people trying to get out of speeding tickets or debts. However, some do actually believe that the 2nd Reich was legitimate while the 3rd Reich (German: Drittes Reich, "3rd realm") wasn't.

Wilhelm II, German Kaiser, King of Prussia and the complete loser that the Reichsbürger venerate. Furthermore, Wilhelm II supported Hitler's rise to power and the extermination of Jews.[3]

This is achieved by heavy quote mining from politicians up until the German Reunification in 1990. Very popular is referring to a 1973 ruling of the German Constitutional Court (German: Bundesverfassungsgericht, abbr. BVerfG), which states that the German Empire (German: Deutsches Reich) did not end with the fall of Nazi Germany and endures, although it cannot act as an entity. What is not quoted is the next part, which elaborates that the German Federal Republic (German: Bundesrepublik Deutschland, abbr. BRD) is a reorganisation of the German Empire and thus the same entity, but not with the same borders;[4] it is, therefore, the successor state.

After the reunification, the entire German state is represented by the Federal Republic; despite that, Reichsbürger (PIGs) continue to bloom. Or wallow, if you prefer.

"There has never been a peace treaty"[edit]

Several Reichsbürger (PIG supporters) also point to the way in which Germany lost World War II. While the military capitulated unconditionally, there was never — so they argue — any sort of peace treaty. However, various agreements made during the occupation of Germany by the Allies as well as the Helsinki accords and the treaties that led to reunification 1989/90 were explicitly signed "in lieu of a peace treaty". The main reason being that the question of reparations was put off "until the signing of a peace treaty" and it would have been awkward for the newly reunified Germany to pay reparations for a war over four decades past.

At any rate, peace treaty or not,[note 1] World War II is over and German sovereignty has never been called into question since reunification either by the United Nations (UN) or by the international community as a whole.

Most, if not all, Provisional Imperial Governments are watched by the German Federal Office for the Protection of the Constitution

("Bundesverfassungsschutz", the German domestic security agency).
Typically they can be put into one of two camps:

It is odd that such far right groups would attempt to claim that the Weimar Republic is still in effect, considering how that constitution tried to be a democracy, but was brought down thanks to the Great Depression and some Austrian ex-corporal who had a chip on his shoulder. Several Provisional Imperial Governments have issued death threats against "traitors".[6]

Regardless of whether self-proclaimed Reichsbürger just want to evade paying fines and taxes or they actually believe their own nonsense, German authorities and law enforcement agencies have a hard time dealing with such individuals, given that they outright refuse to cooperate with the law. As of April 2018 the Federal Office for the Protection of the (very legitimate) Constitution has about 18,000 Reichsbürger on their watchlist[7] and the Federal Criminal Police Office reported that Reichsbürger had at least 10,500 crimes on their conscience[8] between 2015 and 2017 alone.