"I want to tell you one more thing about the Negro!" Just hand them a microphone, and they'll dig their own grave. It really is that easy.

Cliven "Y'all Qaida" Bundy (1946–) is a rancher from southeastern Nevada who was involved in a twenty-year-old legal dispute with the United States federal government over unpaid grazing fees of cattle on government-owned land which ultimately culminated in an armed standoff in March 2014. He became a hero to the lunatic fringe virtually overnight. But he subsequently began to mutter about how blacks were better off under slavery,[2][3] but by then he had already been lionized as a kindly old gentleman gallantly fighting back against 'the system', and that image stuck.[4]

Bundy believes that the U.S. government does not have a right to control the land on which he grazes his cows, arguing that:

Bundy has further argued that "he is a citizen of Nevada and not a citizen of a territory of the United States."[7] The United States, and Nevada, beg to differ, as that's not how US laws work. Not even close. The U.S. government states that it obtained the land where Bundy illegally[8] grazes his cattle in 1848 as part of the Treaty of Guadalupe Hidalgo.

Now watch the U.S. pussyfoot around these terrorists modern-day Minutemen fighting back against the tide of Obama's cultural Marxism.[9][10]

In February 2016 Bundy was arrested by the FBI, facing numerous felony charges over his past antics. However, these were dismissed on December 20, 2017, and later was upheld by the 9th Circuit Court of Appeals on August 6th, 2020.[11] 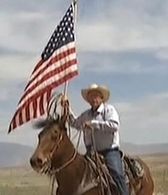 Cliven Bundy, definitely not a citizen of the United States.

Bundy stopped paying his grazing lease in 1993. Since then, the Bureau of Land Management (BLM[note 2]) has been trying to have Bundy remove his illegally-pastured cattle from federal land. This happened after the BLM initiated conservation efforts to try to protect the desert tortoise in designated areas, mostly by re-purchasing previous grazing permits. Bundy responded to this by ranging his cattle pretty much wherever he wanted on BLM-held land.

The area where Bundy is located is known for aggression against federal authorities, and the BLM tried to avoid an armed Waco- or Ruby Ridge-style standoff with Bundy.[12]

Some 1000 members of various right-wing militias from across the country came out in support of Bundy. Some of these were snipers positioned to shoot at federal authorities.[14][15] The courageous militiamen concocted a plan to place women in front of the snipers so they would be shot at first, to increase sympathy for their cause.[16]

After the standoff ended in their favor, the militias declared victory and began using the event to aggressively recruit new members. One group, Arizona State Militia, claims to have received more than 100 new applicants in 72 hours.[18]

This did not necessarily mean he got away with it. In January 2016, his sons Ammo Ammon and Ryan, as well as some buddies, decided to escalate the wingnuttery by taking over the Malheur National Wildlife Refuge in Oregon (which they had no claim over) in protest of two other ranchers (Dwight Hammond Jr. and his son, Steven) getting arrested on charges of arson. They wanted the feds to give back all the land to the "people", never mind that the people already own the land.[19] Cliven himself eventually flew up to Oregon to support his kids, but he was rather quickly arrested in a Portland airport by the FBI once they'd caught word.[20] At this time of writing, he has been indicted by a federal grand jury on numerous felony charges, and has been denied bail.[21] The standoff itself mostly ended not in a blaze of patriotic glory, but with an FBI blockade and most of the militia surrendering save Lavoy "Tarpman" Finicum, who waved a pistol at FBI agents and was thus shot to death.[22][23]

The incident with Bundy has also revealed the utter fucked-upness of American race politics and policing. His supporters advocate for the open carry of firearms both at home and at the ranch that openly threatened federal agents and forced them to back off. After this incident, numerous African-American open-carry advocates began to demonstrate how differently they were treated while openly carrying firearms (even if they weren't threatening anyone[24][25])—including a few videos showing officers drawing their weapons and ordering the advocates onto the ground while threatening to fire, rather than just having a polite, fucking decent conversation if an advocate who was white did the very same. To make matters worse, during the same news cycle multiple African-Americans (including the 12-year-old Tamir Rice) were shot and killed in public by police while carrying toy guns, all without having the chance to do so much as obey the cops' orders.[26][27]

See the main article on this topic: Stopped clock

In a few stopped clock moments, however, Ammon Bundy has voiced his support for Black Lives Matter (not to be confused with the Bureau of Land Management, which he has a grudge against). Bundy also (surprisingly) criticized Donald Trump's Great Wall of America, as well as the historically-unpopular president's uncharitable views on immigrants.[28] These statements make the Bundys one of the few right-leaning libertarians who despise "Big government" consistently, and with no hypocrisy.