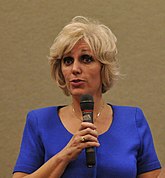 Orly Taitz is an allegedly Moldavian born[note 1] dentist, real estate agent, lawyer[1] and professional time-waster, who, as a batshit crazy prominent birther, has provided too much grist for WorldNetDaily's craziness already. She is most famous for the large amount of TV coverage she received for waving around a birth certificate that she claimed was President Barack Obama's Kenyan birth certificate, which looks strangely like ones issued in South Australia at the time of Obama's birth.[2]

Taitz's views are controversial even to other right wingers: in July 2009, Bill O'Reilly called her views "stupid".[3] In response, Taitz organized a protest against O'Reilly's network, Fox News, on November 11 2009. Fox expected around 150 people to appear,[4] but in fact the number of protesters was closer to 10.[5]

Not entirely successful as a lawyer[edit]

In her capacity as a crank "lawyer", Dr.[note 2] Taitz has represented several people in legal cases against Obama. She obtained her law degree from William Howard Taft University, a correspondence-only university which is not accredited by the American Bar Association,[6] although she has been a member of the State Bar of California since 2002.[7] She was also allowed to appear before the Supreme Court.[8]

She received a $20,000 smack-down for frivolous lawsuits alleging that United States army personnel do not have to go to Iraq or Afghanistan because Obama isn't really president.[9] Following the case she was referred to the State Bar of California for her conduct.[10] Her response was to accuse the judge in that case of being part of the conspiracy to cover up Obama's citizenship. She attempted to appeal her fine to the Supreme Court but was denied a hearing four times. Still unwilling to admit defeat, Taitz has vowed to appeal yet again, to take the case to "an international court", and to file "a proper complaint with the Committee of the Judiciary with the U.S. House".[11]

During the 2012 re-election campaign Tatiz upped the ante and filled a RICO lawsuit in Mississippi. Taitz sued just about everyone that has ever said anything bad about her, media outlets, judges, and an internet forum (The FogBow) as all part of a huge conspiracy out to get her. Taitz keeps adding additional defendants as other judges throw out her case or other people publicize that she is nuts. The total insanity of the RICO suit as well the vexatious multiplication of litigants and massive ethical violations has caused the case to become a major focus of the Democratic Party. Scott Tepper, who has been following Taitz for years, joined the case [12] with plans to shut Taitz down with massive sanctions and ideally disbarment from practicing law.[13]

In addition to the potential sanctions out of Mississippi, Taitz also got smacked down in California to the sum of $4000. Taitz attempted to subpoena Obama's records from Occidental College, instead she was kicked out of court and ordered to pay attorney fees.[14] Occidental's attorney Jay Ritt summed up the win as nothing special and that "I honestly believe a rhesus monkey could have beaten Ms. Taitz and got a sanction award based on the awful lack of merit to the subpoena itself."[15]

She qualified to run for California secretary of state,[16] but was stomped in the primaries. Not having learned her lesson the first time, she entered the 2010 race for the United States Senate.[17] Taitz failed to get past the first round of voting finishing mid pack among 23 other fringe candidates. [18]

Obviously, Taitz's loss could only be attributed to wide-scale voter fraud. She issued a multitude of challenges to deny certification of the results to both the secretary of state in California and the state's supreme court. She has since folded the alleged fraud denying her a senate seat into her California-based birther lawsuits.

One particularly egregious example is that Taitz was using donations to her campaign to fund her lawsuits against Obama. She even raised money for her campaign by stating that the money was used for airfare, filing fees and other expenses. The "Orly Taitz for US Senate" homepage says, "Thank you everyone for your donations and support. It helps me to pay for the airfare and expenses of travel around the country and prosecuting ObamaFraudGate and ObamaForgeryGate."[20]

After the electoral college affirmed Obama's re-election on December 17th, 2012, even Taitz had to admit that birtherism was losing ground. Never one to let a horrible tragedy go by without making it about herself, she issued a statement in response to the Sandy Hook elementary school shootings announcing the creation of a new foundation, called "We Will Never Be Victims Again" advocates the wide-scale arming of and combat training for right-wing nuts across the United States [21]. She did file one last lawsuit in relation to Obama's birth certificate while attempting to prevent the cremation of the director of the Department of Health in Hawaii that certified Obama's birth certificate to be genuine after she died suddenly in a plane crash. She thought it was a cover up of some sort based on her utter belief that she was right, no matter the evidence that she was wrong. Her suit was dismissed within minutes of being filed.[22]

After these court failures came a long string of attempts to get herself involved in a series of scandals on the losing side since being a failed birther wasn't enough. Taitz filed an administrative complaint in December 2013 against A&E and homosexuals for discriminating against Christians when A&E suspended Duck Dynasty's Phil Robertson.[23] Then supposedly filed a complaint in May 2014 against the NBA for "publically bullying" Ronald Sterling for his gross racist remarks claiming he is disabled, as well as requesting that Shaquille O'Neal be banned for stating his opinion on the matter, which she seemed to have forgotten to do.[24] Even though these punishments would have violated the Constitution she cares deeply about and has attempted to use to attack Obama for the last decade. Go figure.

In July 2014 Taitz then sued the US government and Obama personally for transferring undocumented immigrants to other cities in the US instead of kicking them out because they supposedly spread disease. The court found that she not only had no evidence for her case, but lacked legal standing, and dismissed the case.[25] What is odd is after this case was dismissed she then sued the CDC in December 2014 because they didn't provide her information about communicable diseases, including Ebola, that would have helped win the case[26] In the real world, instead of this odd fantasy world Taitz seems to live in, the normal minimum due diligence in a court of law is to find at least enough information to support the claim for additional discovery before filing suit instead of looking for it afterwards.

The lawsuit in March 2015 she filed in Texas seems to bring all of her previous legal ideas together in a suit which sues the federal government for taking in asylum seekers because they engage in identity theft. As an example she brings in Obama who she alleges using a stolen Social Security number, forged identification documents, and a false name. This lawsuit did as well as any of the other lawsuits she filed.[27] No word yet what the next lawsuit will be but it will likely be just as entertaining.

All of these legal hijinks in 2015 were filed during her run for California state attorney general netting a whopping 3.1% of the popular vote.[28] She also claimed to have the Tea Party backing in the state, something which was publically denied by the organizations leader Judson Phillips.[29]

Taitz has made some dubious claims that are not related to President Obama, including:

In 2009, Orly Taitz's website defendourfreedoms.net began to suffer a litany of technical problems, namely security warning messages and severe latency. Taitz claimed variably that the problems were due to either Obama connected hackers attacking the site or the FBI trying to shut it down.

On March 12, the actual site owner took control of the blog to reveal the actual culprit: A third-party data mining application installed by Taitz for some unknown reason. According to the owner, Taitz had authorized the installation of the same application on her first blog, which she abandoned after alleging it had been sabotaged.[36]

After the "long form" certificate is released...[edit]

On April 26, 2011, appearing on Lawrence O'Donnell's TV show, she proceeds to make Suzanne Somers' character on Three's Company look like a genius.