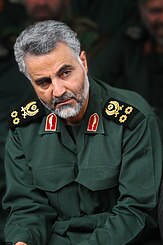 Major General Qasem Soleimani also Qassem Suleimani (11 March 1957-3 January 2020) was the head of the paramilitary Iranian Quds Force (Jerusalem Force). Suleimani reported directly to the Iranian Supreme Leader and Commander-in-Chief, Ayatollah Ali Khamenei. The dude was camera-shy (which is smart) and only showed up when needed… until he died. Nevertheless, he was the most powerful Iranian in the Middle East, and many people saw him as the de facto benefactor of Nouri al-Maliki

in Iraq, along with Bashar al-Assad in Syria.[1]

Soleimani was named on U.S. Treasury Department and United Nations Security Council watch lists for his alleged involvement in terrorism and the proliferation of nuclear and missile technologies.[2] 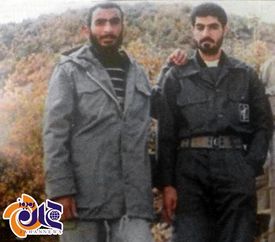 Young Qasem Soleimani (on the right) as Commander of 41st IRGC Sarollah Division during the Iran-Iraq War of the 1980s.

. During the 1980-1988 Iran-Iraq War he was sent to the front very early to transport water, however by the end of the war he was commander of 41st Sarollah Division. After the war he returned to his home territory in eastern Iran, along the Afghan border, to combat narcotics traffickers.[3] The areas are impoverished and dominated by minority Sunni, and have always been difficult for the central Tehran government to control.[citation needed] Having earned a reputation for cleaning the place up, he was promoted to head the Iranian Quds Force in 1998.[citation needed]

War with America in Afghanistan and Iraq[edit]

Suleimani has been the point man for Iran's Iraqi policy and operations since 2003 with authority second only to the Ayatollah Ali Khamenei.[4] Soleimani was granted power to employed the full range of diplomatic, security, intelligence, and economic tools to shape a more pro-Iranian regime in Baghdad.

In early 2008, the Iraqi President, Jalal Talabani, handed a cell phone with a text message to CENTCOM

Following the Iraqi regime's crackdown on Iranian-supported Sadrist militias in Basra in March 2008, Iran recalibrated its operations in Iraq to encompass more "soft power" (economic, religious, educational) support and investment as part of a broader "hearts and minds" campaign.

Solemeini was designated in May 2011 pursuant to Obama administration Executive Order 13572, targeting human rights abuses in Syria, for his role as the Commander of the Iranian Revolutionary Guards Corps-Quds Force, the primary conduit for Iran's support to the Syrian General Intelligence Directorate (GID).[6]

During the Gaza conflict

After the fall of Mosul in June 2014, Iraqi Premier Nouri al-Malaki asked Soleimani to take command of what was left of the Iraqi National Army in addition to the proxy militias Soleimani already was commanding in Iraq.[8]

Suleimani was reported injured in December 2014 in combat with DAESH, although official Iranian news outlets denied this. In March 2015 he led the effort to retake the city of Tikrit from DAESH occupation.[9]

Suleimani was assassinated in an airstrike by the United States on January 3, 2020, apparently while he was going to a meeting with the Iraqi PM. This was designed to be a direct potshot against Iran, and was tantamount to a declaration of war on the part of the United States. Ironically enough, this may have ended up pushing Iraq into Tehran's arms as the Iraqi Parliament recently voted to kick American troops out of Iraq, and the Iraqi PM called this a "breach of Iraqi sovereignty," which, to be fair, it totally was.[10] (not that 'MURICA cares about that sort of thing...)

This islam-related article is a stub.
You can help RationalWiki by expanding it.
Retrieved from "https://rationalwiki.org/w/index.php?title=Qasem_Soleimani&oldid=2453704"
Categories:
Hidden categories: