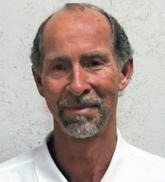 R. L. Wysong (Randy Wysong) (1940–) is an American veterinarian, anti-vaxxer, cholesterol denialist and young earth creationist writer. He is also the founder of the Wysong pet food company[2] and the Wysong Institute.[3]

Wysong describes himself as an "iconoclastic scientist, veterinary surgeon, health educator, pioneering leader in the natural food and prevention fields, inventor, and philosopher."[4] He operates the website AsIfThinkingMatters.com. His book Solving the Big Questions, argues that "everyone has it wrong". The book claims that abiogenesis, evolution and materialism are false, whilst intelligent design and paranormal powers are true.[1]

He is best known for his 1976 young-earth creationist book, The Creation-evolution Controversy.[7] It was not taken seriously by the scientific community. Paleontologist Niles Eldredge noted that:

He explains the importance of the controversy: one's position on "origins" frames one's world view, and one's world view, in turn, leads to one's "approach to life." A "correct" position on origins leads to a "correct" world view which, in turn, leads to solutions to life's problems… Wysong goes on to argue that the evolutionary position influenced the thinking of such historical figures as Mussolini, Hitler, and Freud. But "if on the other hand, life owes its existence to a creator, a supernatural force, then life is the result of his will and purposes. Understanding these purposes would be the only way to understand life's varied questions and problems."[8]

In the book, Wysong made many mistakes. Regarding the starlight problem, he incorrectly asserted that "the time required [for light] to reach us from the most distant stars is only 15 years."[9] Unsurprisingly, Conservapedia is a fan of the book.[10]

Wysong has written a lot of bullshit on Twitter:

Wysong has argued against the ideas of racial equality.

The fact of the matter is there is no equality anywhere in nature or society. There never was and never will be. Results will always be different because creatures and people are different. Any attempt to force equal results on society will doom that society because such effort denies reality.[14]

He is also a fan of races sticking to their "own kind", so he is probably a fan of white separatism.[14][15] He supports racial segregation in prisons:

The prison system clearly demonstrates that preferences simply cannot be eliminated. Here there is absolute control over inmates, much like some politicians would like to impose on the populace. Prisoners, as a rule, couldn’t give a hoot about political correctness. What do they do? They segregate by race. There is so much violence and turmoil if the races are forced to commingle that some prisons now mandate racial colonies within the prison in order to keep peace.[15]

Wysong is a cholesterol and statin denialist. He has authored The Cholesterol Myth, 2010. He denies the scientific evidence that blood LDL cholesterol levels increase the risk of cardiovascular disease.[16]

He is also a vaccine denialist and argues that vaccines are not safe.[17][18][19] He wrote on his website "nobody knows for certain that a vaccine has prevented them from getting a disease."[17]

The Wysong company also controversially introduced commercial vegan chow for cats and dogs.[20][21] This was contrary to R. L. Wysong's own advice of feeding pets a diet that is "as close to the form they would find in the wild as possible."[22]