The omnipotence paradox refers to the apparently paradoxical ability of an omnipotent entity to both limit its powers and remain omnipotent.

The paradox is used both as an argument against the existence of an omnipotent god (and the Judeo-Christian God in particular) and against the concept of true omnipotence.

The paradox highlights cases where, in performing an action, an omnipotent being would be limiting its abilities (therefore rendering it very firmly not omnipotent); conversely if it was unable to perform such an action, it would also not be omnipotent. The paradox represents a reductio ad absurdum, with the conclusion that a truly omnipotent being cannot exist.

The most classic example of the paradox, a Morton's fork, is the "Paradox of the Stone":

Can an omnipotent being create a stone so heavy that it cannot lift it?

Some variations gives other useful consequences:

Can God create a cryptography/key exchange system so secure that he himself cannot crack/bypass? 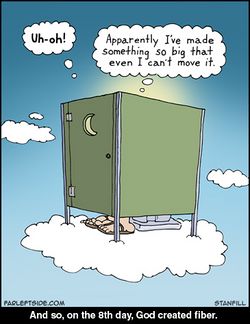 Some have suggested that the concept of any paradox presents a challenge to the concept of omnipotence. For example, the thirteenth century theologian Thomas Aquinas pondered whether God could create a triangle (on a flat surface, no cheating with non-Euclidean geometry) in which the angles do not add up to 180 degrees. Or similarly, could God create a flat circle where π = 3? To do so would be to create a shape which cannot possibly exist in our universe - such a triangle can only exist on a curved surface and even warping space to do so is still placing the object on a curved surface. Yet if God cannot do so, then his powers must be limited by the laws of mathematics, and therefore he could not be fully omnipotent. This can be further complicated by asking "Can an omnipotent being create a triangle with four sides?" The issue here is that an object with four sides ceases to be a triangle and becomes a quadilateral - naturally, an omnipotent being could just rig up human language so that a four sided object was called "a triangle", or try to pass off a straight side as having a 180° corner in it. For the purposes of the paradox the aim is for the being to create such a thing, without resorting to such semantic trickery (and in spite of the semantic contradiction of asking for a three sided object with four sides)

Paradoxes do not necessarily have to ask for strange forces (like unmovable and unstoppable) and strange physics. Omnipotence can equally be limited by non-contradictory but very plain examples. For example consider an individual making the statement: "God cannot make me love him with my own free will". God could "miracle" some love in someone, but that wouldn't be an act of free will. God could torture someone until he "loved him", but similarly, that would be an act of force, morally indistinct from a criminal torturing someone in order to make them say something. God could argue that "he does not need X's love", however this would not remove the original problem that this represents a case where a mere mortal individual can limit God's omnipotence. Still, God could just win us over; after all, when we come to love another mere-mortal, due to that mortal's attempts to win our love, we usually consider that "loving them of our own free will".

Most repudiations of the omnipotence paradox usually concern the definition of omnipotence, reducing it to merely an argument about semantics. These refutations assert that the paradox misrepresents omnipotence and the nature of a particular omnipotent god, as in their view, omnipotence is not necessarily bound by the laws of logic, physics or mathematics (see Molly Hayes' resolution, below). Non-believers often have trouble ignoring the irrationality of this idea, but those happy to accept that such a god would be truly omnipotent regardless of how contradictory that may be have no trouble dealing with it. Notable for being the single strongest case of Special pleading in history of logic.

If the situations were really to occur[edit]

Another argument is that an omnipotent being does have every conceivable ability, including the ability to limit their own power (and hence stop being omnipotent). In this refutation, it is claimed that such a being is unlikely to make that move. Hence they could create a stone so heavy that they could not lift it; they just wouldn't.

The problem here is that the question then becomes "could the being complete the sequence of creating a stone too heavy for it to lift and then lifting it?" Taking into consideration the interpretation that "God makes a rock too heavy for him at the present moment, but gives himself the power to carry said rock after it was created" still solves nothing, as that means that he can only do either/or - he cannot do both at the same time. And that's not omnipotent by a longshot.

Contradiction in the paradox itself[edit]

Albeit, we could reword the question to specify that the object and force have to be able to interact with each other, but it is not entirely fair to keep changing the question just to get around pesky answers.

Within the bounds of logic[edit]

One solution of the omnipotence paradox is to make the hypothetical god omnipotent but still bound within the laws of logic. So while said god could happily create matter out of absolutely nothing, violating conservation of energy, suddenly reverse the orbit of the planet Earth, violating conservation of momentum, this god would still be bound within the laws of logic. This is, of course, playing with the definition of omnipotence and it's generally up to the religion in question to determine the extent of the deity's omnipotence. This response if often phrased as something similar to, "God is able to do all that is able to be done." This approach could be interpreted as skewering itself on the horns of a metaphysical version of the Euthyphro dilemma - why would such a god be the ultimate authority if there exist things even more fundamental?

Parallels can be drawn to the liar's paradox -- Is the statement "This statement is false" true? -- Most responses to the Liar Paradox can be applied to the Omnipotence paradox:

can, in fact, create a core dump

it cannot edit. But of course that is because vi is, sadly, far from omnipotent, unlike emacs

As demonstrated by Star Trek and the wise Molly Hayes

, the omnipotence paradox would also be useful in shutting down Roko's Basilisk or some other rogue AI. (Albeit, Molly later reactivated the AI by providing the obvious answer: "Yes, God could make a sandwich so big that He couldn't eat it . . . And then He would eat it, anyway.")