Rebecca Brown Yoder[note 1] (born Ruth Irene Bailey) (21 May 1948–23 June 2020)[1] was the author of He Came to Set the Captives Free and Prepare For War, both notoriously fraudulent tales about somebody named Elaine (Edna Elaine Moses) she had supposedly rescued from Satanism. Both books were published by Chick Publications and used by Jack Chick as source material for some of his own tracts about the occult (e.g. The Poor Little Witch).[2] 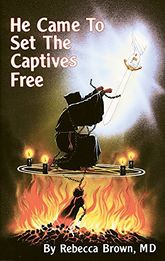 Book cover for He Came to Set the Captives Free

Elaine was allegedly a top member of "The Brotherhood," which Brown says is "the same cult written about...in Mike Warnke's book, The Satan Seller." Elaine was so deeply into Satanism that she actually got married to Satan himself (how dare anyone try and marry a deity!). Brown and Elaine also claimed Christian churches were being widely infiltrated by witches. He Came to Set the Captives Free has all the usual gory stories of human sacrifices and sex orgies common to such Christian books, and an encounter with a werewolf among other things. It also claims Elaine, as a high Satanist priestess, met with rock musicians (who had all signed their souls over to Satan) and with the Pope to discuss Satanist strategy. Prepare for War continues with the Elaine story interwoven with bizarre chapters on other urgent matters she just has to warn the church about, one of which is on how the Catholic mass and rosary are witchcraft, another of which warns against allowing anyone to hypnotise you because they may be homosexuals who, once they have implanted a demon in you through hypnosis, can then astrally project themselves into your bedroom to sodomize you while you sleep.[note 2]

Brown was quickly exposed as a fraud by other Christian ministries who investigated the story.[3] They further found that Edna Elaine Moses was Dr. Ruth Irene Bailey's roommate the whole time, and that Bailey/Brown had had her medical license revoked by the state of Indiana for a repeated pattern of misdiagnosing serious illnesses as "demonic possession," and for inappropriately prescribing large doses of narcotic drugs to her patients, including to Elaine. Amongst her other transgressions was telling patients that she had been "chosen by God as the only physician able to diagnose certain ailments and conditions which other physicians could not" and for falsifying patient charts regarding her patients' condition. The medical board appointed psychiatrist said that Brown herself suffered from demonic delusions/paranoid schizophrenia, which would explain why, as the document says, she went from a bright stable medical student to the mess she became.

After a falling out with Chick, her books are now published by a Pentecostal leaning publisher, Whitaker House. In 1995, she wrote Unbroken Curses, an alleged guide to spiritual warfare and casting out the influence of demons in one's life.[4] The theme of the book is that people have many areas giving Satan an open door into their lives that they need to root out, often because of their ancestors having practiced non-Christian religions or because the occult activity has taken place in the past where they live. Among her more ludicrous claims are that Native American reservations are cursed ground, many children's toys are actually statues of demons, graffiti (tagging) is left by occultists to place a special type of demon called a "watcher" in an area, citizenship papers of immigrant ancestors act as an open door through which thousands of demons from the "old country" can continue to enter the United States, wind chimes invite demons into your home, and the anarchy symbol is actually a symbolic representation of a "watcher" demon that conjures up a real demon. She also tells anti-Semitic tall tales of how her husband was born into a "wealthy Jewish family of international bankers" and subjected to Satanic ritual abuse by a cabal of rabbis who imprisoned him in the deepest subterranean levels of his exclusive boarding school.[note 3] There is also the intriguing claim that teens style their hair according to which demon they have sworn allegiance to.