Richard "Starbursts" Lowry is the editor of National Review and a noted aficionado of Alaskan beauty queens. Among his specialties are masculinity, culture and egregiously bad predictions.

Lowry is a perfect example of cradle-to-grave wingnut welfare. He attended the University of Virginia where he got his first real taste of conservatism at the right-wing cage liner Virginia Advocate. After college, he found a job as research assistant for Charles Krauthammer. From there, he headed to the National Review and started working his way up the ranks. He even found the time to write a traditional anti-Clinton book - Legacy: Paying the Price for the Clinton Years - which was published by traditional anti-Clinton book publisher Regnery Press. 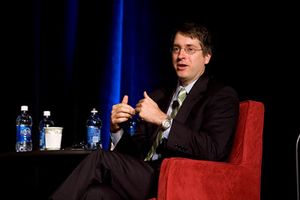 One of Lowry's favorite hobby horses is the rotten American culture. Per Lowry, the permissive, socialist liberal culture was to blame for everything from the abuses at Abu Ghraib[2] to the shooting at Virginia Tech[3] to the devastation of New Orleans by Hurricane Katrina.[4] (the argument here is that the enervating effects of welfare made New Orleans less able to recover from Katrina than from previous hurricanes).

Civil liberties are for suckers[edit]

Like many conservatives, Lowry lost all respect for the Constitution and basic human rights after 9/11. While he was not as vociferous as some, he still offered at least tacit support for expanded domestic surveillance,[5] torture,[6][7] and even collective punishment.[8]

Like Bill Kristol and David Brooks, Lowry has a knack for making erroneous predictions. Among the more unfortunate ones:

One of Lowry's obsessions is masculinity and the supposed lack thereof among liberals. In 2000, he appeared on CNN and alleged that Democrats had "feminized" and "sissified" politics. In response, Al Franken called Lowry and challenged him to a fistfight. Franken recounted the incident in Lies and the Lying Liars Who Tell Them.[13] As expected, Lowry backed out, then followed up with a column in which he likened Franken to Richard Simmons.[14]

This one speaks for itself: