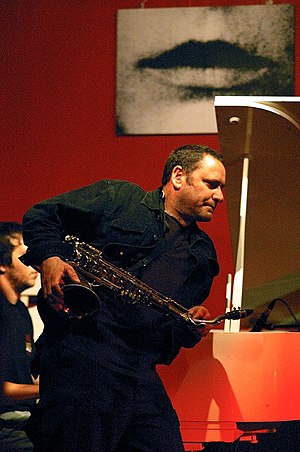 The Holocaust religion's givin' him the blues

Gilad Atzmon is a writer, saxophonist and political activist. He was born in Israel in 1963, but now lives in London and prefers to be thought of as "a Hebrew-speaking Palestinian" due to his anti-Israeli views,[2] which have a tendency to spiral into a particularly bizarre flavour of antisemitism. Atzmon is a near-perfect example of how the extreme right and the radical left can become practically indistinguishable.

Atzmon has been accused of denying the Holocaust; he objects to this. "I have never denied the Holocaust or any other historical chapter," he says. "I also find the notion of 'holocaust denial' to be meaningless, and on the verge of idiotic."[3]

Despite this, he declares that, "the Holocaust narrative, in its current form, doesn’t make any historical sense."

"If, for instance, the Nazis wanted the Jews out of their Reich," he asks, "or even dead, as the Zionist narrative insists, how come they marched hundreds of thousands of them back into the Reich at the end of the war?" He continues:

65 years after the liberation of Auschwitz we should reclaim our history and ask why? Why were the Jews hated? Why did European people stand up against their next door neighbours? Why are the Jews hated in the Middle East, surely they had a chance to open a new page in their troubled history? If they genuinely planned to do so, as the early Zionists claimed, why did they fail? Why did America tighten its immigration laws amid the growing danger to European Jews? We should also ask for what purpose do the holocaust denial laws serve? What is the holocaust religion there to conceal? As long as we fail to ask questions, we will be subjected to Zionists and their Neocons agents’ plots. We will continue killing in the name of Jewish suffering. We will maintain our complicity in Western imperialist crimes against humanity.

As devastating as it may be, at a certain moment in time, a horrible chapter was given an exceptionally meta-historical status. Its 'factuality' was sealed by draconian laws and its reasoning was secured by social and political settings. The Holocaust became the new Western religion. Unfortunately, it is the most sinister religion known to man.[4]

Atzmon has put a lot of thought into the notion of a "Holocaust religion." He states that, "it has its priests (Simon Wiesenthal, Elie Wiesel, Deborah Lipstadt, etc.) and prophets (Shimon Peres, Benjamin Netanyahu and those who warn about the Iranian Judeocide to come)," along with, "its commandments and dogmas ('never again', 'six million', etc.)," and, "an esoteric symbolic order (kapo, gas chambers, chimneys, dust, Musselmann, etc.) ...is coherent enough to define the new 'antichrists' (the Deniers) and it is powerful enough to persecute them (Holocaust denial laws)." Atzmon argues that "[i]n the new religion it is 'the Jew' whom the Jews worship" and concludes that the typical follower of the Holocaust religion "is there to 'schlep' the entirety of world Jewry to Zion at the expense of the indigenous Palestinian people. For the Socialist Jew, the project is slightly more complicated. For him redemption means setting a new world order, namely a socialist haven."[5]

Atzmon comments that certain Jews object to Charles Dickens' Fagin and Shakespeare's Shylock; he believes that this attitude is misguided, as both characters are pretty accurate: "Fagin is the ultimate plunderer, a child exploiter and usurer. Shylock is the blood-thirsty merchant. With Fagin and Shylock in mind Israeli barbarism and organ trafficking seem to be just other events in an endless hellish continuum."[6]

Atzmon has also called America "the Jewish promised land," stating that its "ruthless materialism" makes it culturally perfect for the Jews.[7]

Sunny Singh, an author and senior lecturer in creative writing at London Metropolitan University, has written favourably about Atzmon, stating that she appreciates his writing even though she does not always agree. She has been criticised for her support of the man but scoffed at these objections, comparing criticisms of Atzmon to Muslim criticisms of Salman Rushdie.[8]

Raise Your Banners and Hope not Hate[edit]

In 2011 Atzmon was invited to perform a concert at Raise Your Banners, a music festival in Bradford.[9] Atzmon's critics attacked the Arts Council for giving the festival a £4,000 lottery grant; an Arts Council spokesperson responded by arguing that Atzmon was attending as a musician rather than a political writer,[10] despite Raise Your Banners describing itself as a "festival of political song"[11] and its website speaking approvingly of Atzmon's "fiery political rhetoric".[9]

Amongst the concert's protestors are Nick Lowles and his antifascist organisation Hope not Hate.[12] Atzmon has responded to Hope not Hate's attack on him by quoting from an expose of Lowles published by the organisation Civil Liberty; after it was pointed out that Civil Liberty is a front for the BNP, Atzmon removed the quotation from his website.[13]

The protests were dismissed by Raise Your Banners. "The request has come principally from the Jewish Socialists’ Group and some individual supporters of Raise your Banners festival", said festival secretary Sam Jackson. "We have discussed the matter with the Palestine Solidarity Campaign and are satisfied that PSC have no boycott of Gilad Atzmon or events that he is involved in."[14] This is a curious defence, as the Palestine Solidarity Campaign is itself no stranger to accusations of antisemitism.