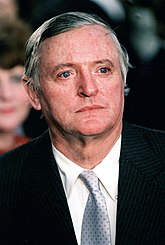 "Idealism is fine, but as it approaches reality, the costs become prohibitive." So here's why we should nuke China.

William F. Buckley Jr. (1925–2008) was an American political commentator from the mid-twentieth century who was highly prone to sesquipedalianism. A prominent conservative in a time when that seemed almost oxymoronic, Buckley is sometimes seen as an ancestor of the modern American right-wing, although in many ways he differs radically from the modern right. Most especially, his was an intellectual conservatism; he matriculated at Yale and became well known for his erudition and powerful argumentative skills. Of course, his ideas behind the prose and big words were just as rancid and evil as his contemporaries at the time, worse in some areas, and some were scarily similar to the rhetoric of the right wing after the rise of Donald Trump in 2016.

Buckley's prominent works included God and Man at Yale, a critique of secularism in academia; Firing Line, a political debate TV show in which he displayed both the aforementioned erudition and a willingness to actually listen to his opponents; and most importantly, the conservative paper National Review. (You can see how well the National Review has turned out without him although we doubt it'd be much better with him)

Buckley ran for Mayor of New York City in 1965 as the candidate of the Conservative Party, against liberal Republican John Lindsay (who won) and Democrat Abe Beame. Buckley came a distant third, scoring 13.4% of the vote. Buckley's brother, James Buckley, fared better in politics, serving as New York Senator from 1971-1977.

William F. Buckley, when starting the National Review, was an ardent supporter of segregation. He later renounced his support for segregation in the mid-1960s, but his racism would only morph into another issue. In addition, he even wrote an article in support of white supremacy, only falling short of racialists of the time, and he never really apologized for the article.[16] In response to Coretta Scott King's failed negotiations to get a statue for Martin Luther King Jr., Buckley said the equivalent of this: "No, she's the real racist! If Martin Luther King Jr. was white he wouldn't get a statue either! Andrew Jackson has no statues after all! She should be told to stop being such a racist and so antagonistic."[17]

Despite having status of a "respected" conservative "intellectual", some of Buckley's views on hot issues for his time were on par with other vehement racists, with some shockingly similar to some of today's Trump supporters of late 2010s. Similar to many conservative pundits suggesting conspiracy to stem sympathy for victims concerning attacks on Democratic politicians (see conservative pundit reactions of the aftermath of the failed 2018 United States mail bombing attempts), Buckley and other National Review editors offered the idea that the 16th Street Baptist Church bombing

was carried out by antifa a provocateur or a "crazed" African American for setting "back the cause of the white people there so dramatically".[18] After Martin Luther King Jr.'s assassination, Buckley also suggested that this could be carried out by a "leftist" because a Klan member wouldn't do this to arouse anger against their group. In addition, Buckley, while trying to condemn the violence, tried to use the now common "look at what you made me do" excuse for the assassin by claiming that "the cretin who leveled his rifle at the head of Martin Luther King, may have absorbed the talk[...] about the supremacy of the individual conscience, such talk as Martin Luther King… had so widely, and so indiscriminately, indulged in."

He also praised The Camp of the Saints,

a book so racist praising pretty much instantly outs you as a racist.[19]

William F. Buckley was unabashedly in support of authoritarian regimes as well as supporting bombing several countries he didn't like. He spoke very favorably of fascist dictators such as Francisco Franco[20][21] and Augusto Pinochet[22] because they opposed communism and despite the fact that the left-wing governments their coup d'etats toppled were democratically elected. He even praised Franco after Franco's death.

Buckley really doesn't like viewpoints that are opposed to him. Really. While he walked back a bit on many of his views or at least morphed them when they were no longer politically acceptable, McCarthyism was one he never really changed.[23] Additionally, Buckley’s career began in 1951 with the publication of God and Man at Yale,

an attack on his alma mater that urged the firing of professors whom he felt were insufficiently hostile to socialism and atheism. Despite this early assault on academic freedom, Buckley in later years routinely took offense at what he saw as liberal "political correctness".[24]

Freedom if it's only your freedom, right?

William F. Buckley really loved bombs. During the Cold War, Buckley advocated preemptive strikes against disfavored nations. In 1965, four years after the Bay of Pigs fiasco, he continued to call for an invasion of Cuba. The same year, he called for a nuclear attack on China's nuclear production facilities. In a syndicated column, he urged a nuclear attack on North Vietnam.[25]

In a debate with Carl Sagan he argued strongly in support of stockpiling nuclear weapons as a means to keep the USSR in check, even though both sides already had enough nukes to destroy each other multiple times over.[note 3]

Paradoxically, he was an outspoken critic of Dubya and neoconservatism in general after the Iraq War.[26]