Ripley's Believe It or Not! (comic) 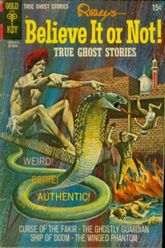 From 1965 to 1980 there was a comic book called Ripley's Believe It or Not! that was put out by Gold Key and later Whitman. While it claimed to have the same authenticity as the newspaper comic strip, the overly dramatic way that many of the stories were told leaves much doubt in the reader's mind. Especially the ones that read like fictional trope stories.

While most issues would have "True Ghost Stories" as an additional part of the title "True War Stories" and "True Demons and Monsters" were sometimes used instead. The Mystery Comic Digest version mixed fictional stories for Grimm's Ghost Stories in with the Ripley's Believe It or Not! stories

This should not be confused with the two-issue comic put out by Zenescope in 2018 as that took liberties with the stories told in the newspaper strip, giving a similar "off" feel to them, and told fictional stories.

This books-related article is a stub.
You can help RationalWiki by expanding it.
Retrieved from "https://rationalwiki.org/w/index.php?title=Ripley%27s_Believe_It_or_Not!_(comic)&oldid=2421375"
Categories:
Hidden categories: