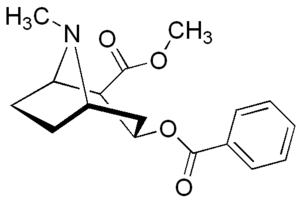 Ingestion of cocaine results in euphoria, general power-tripping, but, sadly, eventual psychosis. According to a scale published in The Lancet, Cocaine works out as the second most harmful and second most addictive drug out of the major controlled substances in use around the world — second only to heroin.[2][3] You know, instead of meth. 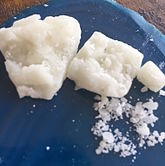 Crack cocaine is generally considered a poor person's drug; it is fairly inexpensive compared to powdered cocaine and first rose to popularity in the inner cities of the United States in the mid-1980s. Though a dose of crack cocaine has roughly the same potency as the equivalent of powdered cocaine, in the US at least penalties for crack dealing and possession are substantially higher than those for powder cocaine, worsening already disproportionate representation of Black and Hispanic minorities in the US prison population. The disparity was introduced in 1986 as a 100:1 ratio in which 50 grams of crack or 5,000 grams of powder cocaine would trigger a 10-year penalty; this was later reduced to an 18:1 ratio.[5] Counter to this is that Methamphetamine has a similar weight requirement as Crack for the same punishment.[6] If we should infer anything, it's that while Racism is still a thing, Classism is the dominating issue in American society.

Crack is smoked rather than snorted, and the drug makes its way to the thinner linings of the lungs than the nasal cavities, causing it to be absorbed faster. The result is a quicker "hit," and causes, according to the ruling opinion, a stronger psychological association between the act of smoking and the onset of the drug's euphoric effects since less time passes between the two.[7] Furthermore, the effect of crack is much more intense, because higher concentrations are in the blood, albeit for a shorter time. Sometimes it is described as feeling like a complete other drug than normal cocaine. If crack was smoked in lower concentrations but over a longer period of time such that the amount of cocaine in your system was the same as that of powder, it's likely the effects would be the same. Compare to brewskis vs Jaeger; both have the same active ingredient, but downing a dozen shots of liquor every Friday night but being sober the other days of the week will wreak more havoc on your liver than slowly drinking two glasses of wine every single day of the week, even if the total amount of alcohol consumed is less.

However, this claim is not without challenge, at least in the academic press. Morgan and Zimmer wrote that available data indicated that "…smoking cocaine by itself does not increase markedly the likelihood of dependence… The claim that cocaine is much more addictive when smoked must be reexamined."[8]

Because cocaine does have historically valid medical uses as an anesthetic, it falls under Schedule II of the U.S. Controlled Substances Act: recognized medical uses, but a high potential for abuse. However, the regulations around its medical use have resulted in its decline in popularity. Luckily, as we've phased out cocaine we've replaced it synthetic opioids, which are far less harmful and completely non-addic... oh.

This situation is reversed in Canada. Under Canada's Controlled Drugs and Substances Act, cocaine is listed alongside Rob Ford heroin and methamphetamine on the most restrictive Schedule I, while Schedule II is a special category containing only marijuana and nothing else. At least until 2018, when Marijuana was legalized, leaving Schedule II empty for now.

In the following public-service video, you will shown by a senior Russian vice-officer the proper way to inspect contraband that you suspect contains cocaine: