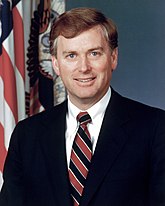 James Danforth "Potatoe" "No Jack Kennedy" Quayle (1947–) was the Vice President of the United States during the George H. W. Bush Presidency. He is also a professional dumbass and the late-20th century's greatest gift to the art of satire. (He may have also been a Time Lord.) Quayle's political stature was immortalised in the first edition of Sid Meier's Civilization

as the benchmark for the poorest performance in the game. He is a serious contender for "worst Vice President ever" and that is a list that includes a Sith Lord, someone

who wanted to conquer the “hollow Earth” and took a 9-month leave during a crisis, a person so corrupt even Nixon wanted no piece of him, freakin' Aaron Burr, and three people

The chief reason for his inclusion on RationalWiki is that despite his near-heroic level of dumbassery, given the choice, most people would have given anything to have him back as Vice President over George W. Bush's VP, Dick Cheney, as stupid is better than evil, although some claim there isn't really a difference. Many were convinced that if the Republicans had won the Presidency in 2008, America would have basically had Dan Quayle on estrogen as the VP. He made a amazingly pitiful run for the presidency in 2000, though the eventual GOP nominee was little better in hindsight. 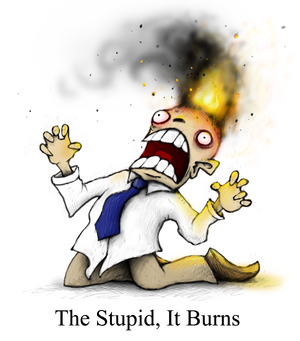 Why do GOP Vice Presidents come in only two varieties: evil incarnate, or dumb as a post? It can not be to balance the ticket.