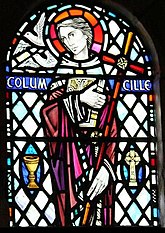 Columba, as imagined by somebody who'd never seen him centuries later.

Saint Columba (in Irish, Colm Cille) is a semi-legendary Irish saint associated with Celtic Christianity and known for his travels in Scotland, where he did a lot of evangelising. He certainly showed a lot of bravery in crossing the sea to Scotland in a tiny boat, but there are also a lot of less believable stories about what he got up to, including an encounter with the Loch Ness Monster, raising the dead, and exorcising a demonically-possessed milk bucket. Like many saints, he had a less than exemplary personal life including early copyright abuse and starting an armed rebellion that may have led to 3000 deaths.

Tradition has it that he was born in 521 CE in Gartan, now in County Donegal, Ireland. He was supposedly a distant descendant of King Niall of the Nine Hostages. It's not clear what Columba's real name was, and whether he was given his name (which means "dove") at birth, or took it on later. He was educated by the church in Ireland before becoming a monk at Clonard (now in Belfast) in his 20s. As a result of a dispute over whether he was allowed to copy a psalter (see below for wilder claims), he was exiled to Scotland around 560 CE. He joined a growing Irish Gaelic community on the west coast, and founded a monastery at Iona which lasted for hundreds of years and still exists as an ecumenical Christian community and retreat.[1] He travelled Scotland evangelising the Picts, although it's not clear how many he converted — reportedly he won the respect of King Bridei I of Fortriu, but evidence is lacking as to whether Bridei stuck with the old gods.[2] There is some dispute over whether he accepted the teachings of Rome on topics such as the date of Easter and whether his travels were authorised by the Pope.[3] Columba died at Iona in 597 CE and is buried there.[4]

There are many colourful stories about Columba, both in Ireland and Scotland.

Around 560, he got in an argument with Saint Finnian about copying a psalter (book of Psalms) which escalated into a full-on armed conflict with the Battle of Cúl Dreimhne, fought at Cairbre Drom Cliabh (in County Sligo). Supposedly Columba had copied the psalter without permission, and Finnian objected, but Columba claimed he could do what he liked. King Diarmait ruled against Columba, and the saint started an armed rebellion against the King with the aid of his family of warriors and the wider Uí Néill clan. The resulting conflict had a claimed 3000 casualties.[5][6]

On August 22, 565, he is said to have stopped by Loch Ness en route to visit the king of the Picts. Supposedly a monster had just attacked some of the locals, killing a man. But Columba wanted to get across anyway, and told one of his men to swim over the water and get a boat from the other side. The man, being either very obedient or skeptical regarding water-monsters, jumped in. He was attacked by the monster, but Columba raised his hand and told the monster, "You will go no further, and won't touch the man; go back at once." Nessie was terrified and ran away, and Columba and friends were able to continue their journey without being eaten.[7]

This account is however viewed with a certain skepticism by some people. Columba's life was written a hundred years later by Adomnan or Adamnan of Iona (624-704). There are other versions of the story which disagree on important details like whether Columba raised the man killed by the monster from the dead (this seems the sort of thing you'd remember and include in any account).[8] And then, of course, there is the elephant in the room: that there is no monster in Loch Ness, which would make it difficult for him to have an encounter with one there.

Adomnan or Adamnan's life of Columba seems to have been quite an exciting read. One Christian source summarises it: "He made water into wine like Jesus, drew water from a rock like Moses, calmed a storm at sea, provided a miraculous draught of fishes, multiplied a herd of cattle, drove a demon out of a milk pail, and cured the sick. A book owned by Columba could not be destroyed by water. Through his prayers he killed a wild boar, stopped serpents from harming the inhabitants of a certain island. Angels and manifestations of divine light attended him throughout his life."[8]

Adomnan had never met Columba, being born a few years after his death. And as a monk at Iona, which was founded by Columba, he would doubtless be keen to promote his predecessor. It seems that without Adomnan's account, Columba would just be another obscure figure who travelled a bit and did some religion.[9]

He is an important figure in both Ireland and Scotland, ranked as one of the most important Irish saints along with Saint Patrick and Saint Brigid (or Bridget, or Bride). In Scotland he is one of the most common eponyms of churches, and was important in promoting monasticism.