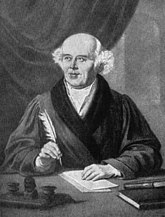 Christian Friedrich Samuel Hahnemann (1755–1843, a long life at almost any time) was a German physician during the 18th and 19th centuries who is best known as the founder of homeopathy. He was frustrated by the surgical procedures performed on patients at that time — when anaesthetic had not been invented and many patients died because of infections and other complications. The mainstream medicine at that time was not evidence based and didn't work particularly well.

He came up with the idea of like cures like (similia similibus curantur) after taking cinchona bark (a malaria treatment containing quinine) and noticing it caused symptoms similar to malaria. The problem is that the symptoms he experienced were probably a result of an allergy to quinine,[1] meaning that the foundational observation on which homeopathy was invented is false. It is claimed that many patients who came to Hahnemann were cured. However, modern-day scientists have explained that this was because he, unlike other physicians of the days, did not "torture" his patients, rather than because of any efficacy of homeopathic medicine itself.

Hahnemann is interred in Pere-Lachaise cemetery in Paris.[2]

"In the other direction … are the tombs of two contrasting doctors: that of Samuel Hahnemann, father of immunology[sic], whose large rose granite monument and bust were erected by a grateful international following; and that of Dr. Joseph Ignace Guillotin who adopted the guillotine from an earlier Scottish device with the humanitarian aim of stopping more brutal kinds of executions. Before its use he had been a leading society doctor in Paris; after its initiation his practice fell apart."[3]