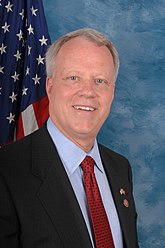 Paul Broun is a trained medical doctor, a Republican representative to the US House of Representatives from Georgia and an all-around stockpile of in(s)anity.

Broun previously got on the wingnut bandwagon in a big way in 2008 when he compared Presidential candidate Barack Obama to Adolf Hitler; as usual with politicians like this, he issued an "apology" - but not before stating that he still believed that Obama espoused what he termed "that type of philosophy of radical socialism or Marxism."[1] In 2009, he stated that a "socialistic elite" comprising Democrats like Obama, Nancy Pelosi and Harry Reid might use a pandemic disease in order to declare martial law.[2] Eventually, he decided that making specific claims on the subject was no longer such a good idea and started resorting to the usual vague hand-waving about how Progressives are out to contaminate our youth's precious bodily fluids in order to destroy America.[3]

He is a Young Earth creationist who believes that the theory of evolution, embryology, and the big bang theory are "lies straight from the pit of Hell."[4] Despite these views, Broun sits on the House Committee on Science, Space and Technology.[5]

Unsurprisingly, he is also a global warming denialist.[6] He's also opined that actually lowering the national debt ceiling (a position even more extreme than Tea Party advocates of never raising it) is a simply peachy-keen idea in his book.[7]

Broun spoke at the Association of American Physicians and Surgeons.[10]

He also shows love for fellow Congressional wingnuts in singularly odd ways, such as endorsing Allen West for Speaker of the House of Representatives. This was somewhat unusual - bordering on silly - as West had just lost his seat in the general election.[11]

In true stopped clock fashion, however, he voted against the Patriot Act.

Broun left the House of Representatives in January 2015 and was replaced by Jody Hice. Hice may actually end up being worse at his job that Broun was, which is a truly astounding accomplishment in itself.[12]

This politics-related article is a stub.
You can help RationalWiki by expanding it.
Retrieved from "https://rationalwiki.org/w/index.php?title=Paul_Broun&oldid=1949137"
Categories:
Hidden category: