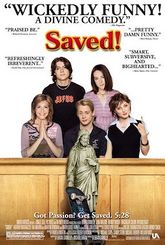 Saved! is a teen comedy made in 2004 starring Jena Malone, Mandy Moore, Macaulay "remember me from Home Alone?" Culkin, Patrick Fugit and Mary-Louise Parker. The main thing setting it apart from most teen comedies is that it takes place within an evangelical Christian high school, and follows the reactions of a group of students and their parents as they are hit with such issues as homosexuality, teen pregnancy, adultery and all-around challenges to their fundamentalist worldview. Writers Brian Dannelly (who also directed) and Michael Urban largely based it on their own experiences growing up in ultra-religious households — Dannelly came out at the age of 17 and was thrown out of the house by his parents, while Urban was raised in an old-time Baptist home in the South. While Saved! ultimately ends on a pro-Christian note, this comes after ninety minutes of showing little mercy to the intolerance, hypocrisy and shallowness of fundamentalism and modern evangelical Christianity.

Mainstream critics generally liked it, although there was a general feeling that the finale pulled its punches compared to the rest of the movie.[1] Fundies, of course, bashed it, feeling that anything that questions their interpretation of the faith is an attack on it.[2] Even during the film's production they had a church, a Christian rock group, and the owners of a home where they were shooting at all pull out of the production due to its unflattering portrayal of evangelicals.

Mary Cummings (Malone) is a teenage girl who has been born again since her youth, and is now a member of the most elite clique at American Eagle Christian High School: the Christian Jewels, led by Hilary Faye Stockard (Moore), a good Christian girl who could be driving the Lexus that God wants her to have, gosh darn it, but instead has to drive a disability van to shuttle her wheelchair-bound brother Roland (Culkin) to and from school. One day, while Mary is swimming with her boyfriend Dean (Chad Faust), he reveals to her that he is gay. Mary, shocked, knocks her head on the pool ladder and blacks out, causing her to have a vision of Jesus (actually the pool boy swimming down to save her) telling her that Dean needs her help. Mary decides to act on this advice... the only way she knows how.

It doesn't work, and Dean's parents ship him off to Mercy House, a Christian counseling center, after they find beefcake magazines under his bed. Moreover, ever since her night with Dean, Mary has been suffering from morning sickness and missing her period. Due to her school's sex education being strictly abstinence-only, Mary only finds out that these are signs of pregnancy after watching a Lifetime movie of the week with Valerie Bertinelli. Mary's once-ironclad faith is shaken by her pregnancy, causing her to have a falling out with Hilary and the Christian Jewels. She subsequently befriends two of the school's outcasts: Roland, a closet atheist and a rather snarky mofo, and Cassandra Edelstein (Eva Amurri), the school's only Jewish student, a foul-mouthed, chain-smoking "bad girl" who was sent to American Eagle because she'd been thrown out of every other school and would rather deal with Christians than her parents. Mary also starts dating Patrick Wheeler (Fugit), the son of the school's principal/head pastor, who had been doing missionary work with a skateboarding ministry in South America.

As the rift between Mary and Hilary grows deeper (including an attempt by Hilary to exorcise Mary), the school is vandalized with anti-Christian graffiti. Mary and Cassandra are caught with spray paint hidden in their lockers, leading them to take the blame; in truth, Hilary did it and framed them in order to get the two of them expelled. In addition, while their lockers are being searched, a sonogram of Mary's baby is discovered, revealing her secret and causing her mother to consider sending her to Mercy House. The entire situation comes to a head at the senior prom.

The film's B-plot involves the relationship between the school's principal Pastor Skip (Martin Donovan) and Mary's mother Lillian (Parker). Pastor Skip tries to reach out to students by being "hip" and "with it", and has been separated from his wife due to her missionary work, while Lillian lost her husband years ago. The two of them start dating, until Mary's pregnancy is revealed. Pastor Skip, feeling that this is God's punishment for his adultery, threatens to break up with Lillian unless she sends Mary to Mercy House.

Mandy Moore, who is also a pop singer, contributes a pair of songs to the soundtrack. Within the film, she sings a schmaltzy CCM tune during a school assembly, and she performs a cover of "God Only Knows" with Michael Stipe (who was one of the film's producers) over the end credits.

The original ending was far more violent than what made it into the finished film. In this version, Hilary, after her breakdown at the end of the film, was to grab a rifle and shoot up her senior prom.[3]

In addition, Anne Hathaway was originally attached to play Hilary, but they didn't have the money to cast her.