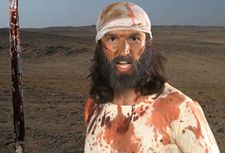 The film's outlandish depiction of Muhammed.

Innocence of Muslims (also known as Innocence of bin Laden)[2] is an unwatchably bad extremely informative (read: prejudiced) Islamophobic film notable for inspiring violent protests and riots in the Islamic and Western world in September and October 2012. The film was made by Coptic Christian fraudster and drug dealer Nakoula Basseley Nakoula (although it was previously attributed to a non-existent Israeli-Californian real estate developer whose name was variously given as "Sam Bacile", "Sam Bassiel" and "Sam Bassil")[3][4][2] to express and spread his belief that "Islam is cancer".[5] This goes to show that not even progressive Southern California cities are immune to crazy Islamophobia. Pastor Terry Jones, who previously burned the Qu'ran in public and sparked mass riots from Islamists, came out in support of the film and regularly played it at his megachurch.[6]

Trailers for the film, including one that lasts for nearly fourteen minutes, were posted online. As a work of cinema, Innocence of Muslims is characterised by its rock-bottom production values, awful dialogue, melodramatic acting, poor direction, crude overdubbing, horrendous costumes and special effects, blatant inaccuracies, and sloppy editing. On at least one occasion, an actor completely flubbed his lines and nobody bothered to retake the shot. All the characters speak in American accents as well, showing the filmmakers' commitment to detail.[note 1] The film also has horrid chroma-keying, with actors superimposed onto a generic and static image of a desert. Amazingly, despite its disastrously low quality, Innocence of Muslims supposedly cost over US$5 million to make.[5]

Innocence of Muslims itself is a puerile, bigoted and grossly inaccurate biography of Prophet Muhammed and his early followers, who are portrayed as brutish despots, hedonistic gluttons, sadistic mass murderers, perverted philanderers, and child molesters. The movie starts with a exaggerated depiction of the reportedly increasing persecution of Coptic Christians in Egypt, as Muslim fundamentalists burn and pillage homes and businesses owned by Copts, including a private clinic, whose doctor and family had to flee to their home. The Egyptian police are portrayed as completely indifferent to the violence, standing motionless and never intervening as entire communities are burned by Islamist rioters. Later on, the doctor in question reports that the police have supposedly arrested 1,400 Christians, tortured them and forced them to "confess to the killings". When his horrified daughter asks why, he says the police are "protecting Islamic crimes". He then goes off the rails and writes a crude diagram stating that "Man + X = BT" (with "BT" being overdubbed as "Islamic Terrorist"). Upon being asked by his daughter what "X" means, the doctor says, "You'll have to discover that for yourself," with the implication being that "X" means Islam. The film then cuts way back into the past, depicting Muhammad supposedly being born four years after his father died in pre-Islamic Arabia. The film explains the story of his life and his followers in the aforementioned defamatory and vulgar style, with Muhammad himself depicted as a greedy, gluttonous Lothario with a seemingly endless sexual appetite.

as the lead role of Muhammad. While movies can be surprisingly expensive to make, (even hilariously crappy ones like The Room

), the idea that such an obviously cheap, poor quality screed could cost more than US$5 million to produce is very hard to swallow.[8][9] However, it's possible that a full version of the movie doesn't even exist in any finished form, due to Nakoula's long history of fraudulent schemes. The only things ever produced were the trailers posted on YouTube to make a wingnut statement against Muslims.[10][11] Even so, the possible lack of existence of Innocence of Muslims has not prevented people from having strong feelings either for or against it.

People involved with the film's production[edit]

Early reports mentioned that "Sam Bacile" identified himself as a wealthy real estate developer and an Israeli Jew. Later on, however, Steve Klein, a Christian fundamentalist who worked with him on the project, referred to him as a Coptic Christian, and also confirmed that the name "Sam Bacile" was just a pseudonym. It was eventually confirmed that the manager of the company that produced the film was Nakoula Basseley Nakoula (later Mark Basseley Youseff), a Coptic Christian immigrant who gave that name when appearing on his court trial, so this is likely to be his real name.[12] Basseley whatever has a long history of fraud and drug-related convictions, including tax evasion for his gas station businesses, attempting to manufacture methamphetamine to pay off his debts, and stealing several social security accounts, even one belonging to a six-year-old child.[13] Nakoula was eventually arrested on September 28, 2012, and sentenced to a year in prison for breaching his probation conditions by using the internet to distribute his movie and claiming a fake name, although some of the court proceedings were undisclosed to the public.[12]

Steve Klein, a religious extremist who has past involvement with far-right hate groups, incited protests, vandalism and violent riots against abortion clinics, Mormon temples, and mosques. He was directly involved in training and recruiting fundamentalist Christian paramilitaries, acted as Nakoula's main spokesman, and actively promoted Innocence of Muslims across America.[14] Large chunks of the movie were clearly overdubbed by different actors to add in anti-Islamic content, even though it was shot in English. Members of the cast later went on record to denounce Nakoula for taking advantage of them, and emphasized that they had no idea they were starring in an anti-Islamic movie, having been given completely different lines for a movie called Desert Warrior.[15] Despite being deceived by Nakoula to star in Innocence of Muslims, the cast received numerous death threats from Islamists, had difficulties with getting new careers, and faced financial problems and public humiliation due to their infamous reputation for starring in the movie.[16]

Innocence of Muslims allegedly had a brief run in a single Hollywood cinema in July 2012, under the name Innocence of Bin Laden,[9] but the trailer became an instant "cult classic" when an Arabic translation was posted to YouTube by a Coptic Egyptian activist.[17] Fortunately, Islam is known as a religion of peace, so Muslims around the world denounced the inaccuracy and poor quality of the trailer in a calm and orderly fashion and roundly mocked its director for producing such a piece of schlock, then moved on with their lives.

Ha ha, just kidding. Turns out the "religion of peace" spiel is just a deceptive slogan, and Muslims react violently against "blaspheming" Muhammad and Allah. Salafist supporters of extremist Sharia law used the film to gain popularity amidst mass protests and riots against its "heretical" and Islamophobic content.[18] On September 11, 2012, violent riots broke out in front of the American embassy in Cairo and at a consulate in Benghazi, Libya, where American ambassador John Christopher Stevens and several others were murdered in a coordinated terrorist attack by Ansar al-Sharia, an Islamist terrorist organization that used the protests as camouflage to ambush the embassy.[19] The epidemic of attacks and riots near American embassies spread to several Middle Eastern and North African nations as the unrest intensified, alongside angry demonstrations and protests in the rest of the Arab world.[20] In Sudan, the German and British embassies were also attacked and torched by Islamist rioters,[21] and large protests flared up on September 14, as other Muslim countries also experienced attacks and arson against Western embassies.[22] Pakistan's government was forced to block access to YouTube in an attempt to curtail the spread of the movie's content, as the protests and riots against Innocence of Muslims continued to escalate throughout the Muslim world and the death toll skyrocketed.[23]

On September 21, 2012, the French anarchist and leftist satirical magazine Charlie Hebdo also published cartoons that mocked Muhammad and Islamist fundamentalists, fueling further riots and violence. The protests against Innocence of Muslims continued to spread, as many other American and Western embassies and businesses were attacked by rioters, and even cinemas and theaters were set on fire by Islamist extremists,[24] as civilian casualties continued to steadily rise.[25] To top it off, wingnut Pakistani minister Ghulam Ahmad Bilour outright promised a bounty of US$100,000 to anyone, including the Taliban and Al-Qaeda, who murdered Nakoula, the director of the film. He considered this a "sacred duty of Islam",[26] and also demanded the passing of laws that criminalize "blasphemy" and "insulting our prophet".[27] In response to the riots, US President Barack Obama called on all Islamic leaders to speak out against and bring an end to violence and extremism in a speech to the United Nations General Assembly.[28]

The protests and riots against Innocence of Muslims resulted in more than 50 deaths and hundred of injuries across the world.[29] While only a minority of people in the countries affected were actively involved in the protests, significant Islamist pressure groups, such as the Muslim Brotherhood, manipulated the protesters to destabilize secularist governments. The protests and riots also made it far difficult for the new democratic governments that arose after the Arab Spring to stabilize and consolidate their legitimacy, and helped contribute to the eventual downfall of many such governments to autocrats in the so-called "Arab Winter". After Nakoula was arrested and jailed for breaching his probation conditions, the protests and riots finally fizzled out.

Under the Muslim Brotherhood-affiliated government of Mohammed Morsi, an Islamic court in Cairo sentenced seven Egyptian citizens involved with the film to death for "blasphemy". Tried in absentia, they would have faced the death sentence should they ever return to Egypt. After Abdel Fattah el-Sisi's military coup against Morsi and a mass crackdown on the Muslim Brotherhood and conservative Islamists, the sentences were eventually overturned.[30]

Sam Harris and other secularists see the riots as part of a larger pattern where Islamist extremists violently react against a wide range of legitimate criticisms of Islam. Before the nature of his convictions was made public, there was concern that Nakoula was arrested to appease Muslim fundamentalists rather than his past criminal history, and fears that the American government has sent a message that they are prepared to compromise free speech to appease Muslim extremists for the sake of public order have become widespread. Other activists in the US who have actively criticized Islam may fear that similar such "excuses" will be found to persecute them too.[32]

Contrary to public fears, the BBC correctly deduced that the United States Constitution mandates that the authorities are to permit the film to be shown regardless of the nature of its content.[33] Several jurists, however, have suggested that the film is not constitutionally protected speech in the U.S., because it appears that Nakoula, Steve Klein and other producers of the movie knowingly intended to put people's lives and property at risk. Indeed, the timing of the trailer's release, roughly two weeks before the 11th anniversary of the 9/11 terrorist attacks by al-Qaeda, suggests deliberate provocation against the entire Islamic faith. However, while it's true that the First Amendment does not protect speech intended to incite imminent violence, very few Constitutional scholars and lawyers supported the notion that Innocence of Muslims could fail to be protected by such a standard and any other legal theories.[34][35]