Shintarō Ishihara (石原 慎太郎) (1932–2022) was a Japanese author,[1] politician,[2] and historical revisionist[3] who served as one of his country's most widely-recognized evil wingnuts this side of his old romping buddy Yukio Mishima. One of the most prominent members of the Japanese far right,[4] he served as Governor of Tokyo for over a decade between 1999 and 2012, during which he proved himself to be a flagrant xenophobe, racist, and homophobe, among other things. And if he wasn't enough of an asswipe, he stated that French was an unusable language because of its unconventional counting system, destroyed a nature preserve, and tried to have both manga and anime banned. And with the bloody cherry on top of the sludge, he was also a Rape of Nanking denialist and has defended the Japanese occupation of Korea while calling for the country to be more "assertive" (read: interventionist) in its foreign policy.

Ishihara started his life innocuously enough as a writer, his debut novel earning him the Akutagawa Prize (Japan's most prestigious literary prize) two months before he had even graduated from University.[5][6] Somehow, this led to him and his brother Yujiro (a popular singer and actor) becoming the center of a youth-oriented cult,[7] though this shouldn't come as too much of a surprise considering he was close friends with Yukio Mishima.

Like his contemporary, Ishihara dabbled in filmmaking, adapting several of his works to screenplays and co-directing an anthology film with the likes of François Truffaut

He later claimed in an interview that if he had stuck with filmmaking, he would've been a "better director than Akira Kurosawa.

"[8] His work encompassed stage plays, novels, short stories, essays, and screenplays. He also ran a theater company, visited the North Pole, raced his yacht, worked as a war correspondent in Vietnam, and rode across South America on a motorcycle. If you knew him by this description alone, you might think he'd be a pretty swell guy. Alas…

Mishima's nationalistic fervor likely rubbed off on him, as he first entered politics by joining the right-leaning Jiyū-Minshutō (Liberal Democratic Party) and serving in the upper house of the Japanese Diet after being placed first on the party's list by an unprecedented 3 million votes. In 1973, he joined with thirty of his colleagues in founding an anti-communist coalition called the Seirankai (Blue Storm Group), which notoriously sealed its pledge of unity using signatures written in blood. (Ahem[9]) After losing the 1975 gubernatorial election, Ishihara worked his way up through the party to Minister of Transport but was unable to gain enough internal support to gain any real, tangible footing despite his outside popularity. At one point, he resorted to posting campaign flyers around Tokyo alleging that his opponent was a North Korean expat.

In 1989, at the height of the Japanese property bubble, Ishihara and Sony chairman Akio Morita co-authored an essay titled The Japan That Can Say No: Why Japan Will Be First Among Equals calling for Japan to assert its economic prowess and become the next world superpower.[10][11] One comedic jump cut later, Japan's economy all but imploded in what would come to be known as the 'Lost Decade'.[12] Morita quietly distanced himself from the essay, which was ranked by Daniel W. Drezner of Foreign Policy as one of the "10 Worst Books in International Relations".[13] During the following decade, Ishihara, perhaps recalling his fond memories of himself being the center of a cult, gave financial and political support to Aum Shinrikyo right up until they launched a Sarin gas attack in his home city that killed a dozen of his constituents. 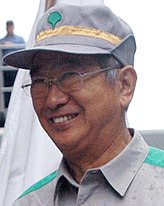 Ishihara ran in the 1999 gubernatorial election as an independent on a platform that included, among other things:[citation needed]

His constituents generally seem to concur that Ishihara did an "okay job" during his four consecutive terms, but his bungling of the Tsukiji fish market relocation earned the ire of the city's populace. Ishihara, as early as 2008, had helped spearhead plans to move the over 100-year-old facility, which is the single-largest wholesale fish and seafood market in the world, to a man-made island in Tokyo Bay due to the crumbling, outdated infrastructure. However, an environmental survey conducted that year found that the land, which had previously housed a gas processing plant, contained high levels of a number of dangerous chemicals, with benzene levels 43,000 times the permitted legal levels. A massive, years-long clean-up operation that extended past Ishihara's term was ordered - at a net cost of 85 billion yen (or around 800 million USD) - but when new tests in 2015 found the site was still contaminated, it was revealed that much of the work had not been carried out before planned construction on the facility. As of October 2017, the site remains empty.[19] Ishihara was subsequently brought before a tribunal consisting of delegates from the region's four major parties.[20]At the end of the day, the city was left footing a total bill of almost 600 billion yen, with little to no progress to speak of.[21]

Ishihara resigned as governor in 2012 in order to participate in the upcoming national election.[22] He joined the Sunrise Party, a far-right party he'd help found two years prior, which only four days after launch was merged with the Japan Restoration Party, of which Ishihara became leader. The party was dissolved only two years later due to "internal disagreements". Following a failed run in 2014, he retired from politics.[23]

Ishihara was probably the most prominent representative of Japan's far-right[24] and has been compared to Jean-Marie Le Pen.[25] He was a member of Nippon Kaigi, a reactionary revisionist organization to which former Prime Minister Shinzo Abe served as a parliamentary adviser.[26] He's proven himself quite apt at the latter occupation, claiming in a 1990 Playboy interview that the Rape of Nanking is a "story made up by the Chinese" to "tarnish the image of the Japanese."[27][28][29] He's also claimed the Japanese occupation of Korea was justified.[30]

He was also a racist, sexist, and a xenophobe, alleging in a 2000 speech to Japan's Self-Defense Forces that foreigners and sangokujin

(三国人) (an archaic, derogatory for ethnic minorities, roughly equivalent to the English n-word)[31] were responsible for causing "countless, atrocious crimes" and that they would cause civil disorder should a natural disaster ever strike Tokyo.

A once-celebrated author who published works featuring violent and sexually explicit themes, Ishihara seems to have at some point done a full 180° and has led calls for the censorship of television, manga, and video games, as well as banning the depiction of homosexuality[32][33] which he deemed to be abnormal.[34]

Ishihara has also expressed a desire for Japan to acquire nuclear weapons.[35][36] He caused (yet another) uproar in 2012 when he offered to buy the disputed Senkaku (also called Diaoyu) Islands, which only served to aggravate diplomatic tensions between Japan and China.[37]

At the very least, he wasn't a global warming denialist.[38]

During an inauguration of a university building in 2004, Ishihara stated that French is unqualified as an international language because it is "a language in which nobody can count", referring to the counting system in French, which is based on units of twenty for numbers from 70 to 99 rather than ten (as is the case in Japanese and English). Ishihara clarified that he did not disrespect French culture by reiterating that some of his best friends are French professing his love of French literature. Also, don't talk about how the Japanese count their calendar days: it's not the same as how the French count theirs (for the French speakers and us, it's a simple 1st, 2nd, 3rd, nth, etc.), being even more convoluted and arbitrary than the 70-99 rule, and the Japanese have several words for each number that vary depending on the context.

Ishiarah (and his colleagues) was also a sexist fart who believed women are useful as incubators as long as they are the appropriate age to function as one. In an interview with a women's magazine in 2001, Ishihara stated that "old women who live after they have lost their reproductive function are useless and are committing a sin," adding that he "couldn't say this as a politician."[39] This comment made his cronies laugh. He also didn't care about the sexual harassment going on and has ignored U.N. recommendations dealing with it.

Seemingly echoing sentiments of the American religious right, Ishihara characterized the 2011 Tōhoku earthquake and tsunami as "'punishment from heaven' because Japanese have become greedy"[40][41] and perhaps because Tokyo elected an abominable asshole.

In a May 2017 interview with the news tabloid Shūkan Gendai, Ishihara alleged that Barack Obama had orchestrated a CIA plot to assassinate him using Chinese assassins in a staged traffic accident.[42] Just a friendly reminder, this man held elected office in the world's largest metropolitan area FOUR CONSECUTIVE TIMES.

Ishihara did the first decent thing he's ever done in life and died on February 1, 2022 of pancreatic cancer aged 89.[43]