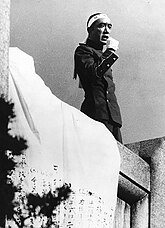 Kimitake Hiraoka (平岡 公威 Hiraoka Kimitake) (1925–1970), better known by his pen name Yukio Mishima (三島 由紀夫 Mishima Yukio), was a celebrated Japanese author, polymath, and a massive wingnut. Considered a groundbreaking, taboo-breaking avant-gardist, he infamously took the adage "the pen is mightier than the sword" very literally, and attempted to incite an overthrow of what he deemed the corrupting influence of the westernized Japanese government through his own personal militia, failing miserably and committing ritual suicide in public.

Needless to say, he's a bit of a darling in alt-right and far-right nationalist circles,[1] a sort of orientalist Julius Evola. Of course, most of his most fervent wingnut fanboys conveniently ignore every facet of his life except for the "overthrow the capitalist hegemony and restore the soul of our glorious nation" part (and the fact the Japanese Self-Defense Force, JSDF, laughed him off the balcony when he attempted his coup d'état). He's been studied extensively by both academics and artists, and remains a very prominent and controversial figure both in Japan and abroad.

Mishima was born in Shinjuku, Tokyo to a family with deep ties to the aristocracy; it had long served under the Maeda samurai clan, his grandmother Natsuko was descended from the Hitachi province daimyō and was the direct descendant of Tokugawa Ieyasu, a legendary historical figure whose shogunate controlled Japan between 1600 and the Meiji restoration. His grandfather was Governor-General of Karafuto Prefecture on what is now Sakhalin Island, Russia.[2]

Mishima was taken from his mother at an early age by said grandmother, who was prone to random violent and morbid outbursts, telling Mishima he would die if exposed to sunlight, and forbidding him to interact with other boys his age. Mishima's early childhood would come to influence the author's later fascination with death. Mishima was enrolled in Gakushūin, a private school frequented by the nobility, and began writing at the age of 12. His first story for the school's literary magazine, Hanazakari no Mori (花ざかりの森, "Forest in Full Bloom"), alludes to many themes that would come to define Mishima's philosophy and ideology; with a narrator describing the feeling that his ancestors somehow still lived within him.

During World War II, Mishima was rejected from the draft after the examiner at his medical check-up misdiagnosed his cold as tuberculosis. In his autobiographical novel Confessions of a Mask (仮面の告白, "Kamen no Kokuhaku") he alludes to having deliberately exaggerated his own condition and thus depriving himself of the chance to die in service to his country. Whether this actually happened or was something he convinced himself of years after the fact is unclear, but it nonetheless became one of his lifelong obsessions.

Mishima started writing professionally after the war and became incredibly prolific and acclaimed in only a short amount of time, becoming Japan's literary darling and gaining a considerable following in both Europe and the United States. He was nominated three times for the Nobel Prize in Literature, and won numerous other literary accolades. Mishima expanded his celebrity into other media, he acted in several films (some of which he also directed), modelled in several photoshoots, and wrote a number of plays, essays, and poems. His work started taking a more overtly political bent in the 1960s, in which he wrote several essays critical of the Japanese-US defense pact and of leftism.

Incidentally, Mishima was also a self-proclaimed science fiction and manga fan, which definitionally makes him an otaku.

Mishima was a Japanese nationalist and imperialist who believed in restoring the Imperial House to political power and for the military to be restored to their pre-WW2 status as an offensive as well as defensive entity. He was opposed to democracy, communism, and globalism, which he characterized as foreign ideas and therefore detrimental to Japan. Much of his politics were born out of the post-war U.S. occupation of Japan and its systematized restructuring of Japanese society and politics, including the construction of maintenance of U.S. military bases on Japanese soil, which Mishima saw as a gross breach of national sovereignty and indicative of Japan's cowing to foreign influence.

Like many Japanese nationalists and right-wingers, Mishima's held a great deal of reverence for the Bushido warrior code (itself largely an invention of 19th and 20th century Japanese political theorists), and likened himself to the samurai of old, particularly in regards to their practice of seppuku (ritual suicide) in the face of defeat or dishonor. It was a theme that permeated a great deal of his writing and would eventually come to full fruition when he attempted seppuku after his failed coup attempt.

However, his politics weren't completely aligned with the right-wing. He held fairly progressive views on sexuality (he himself was gay or bisexual), and he also was critical of Emperor Hirohito because he had renounced his divinity and therefore invalidated the entire Japanese cause for the war in the first place. Mishima, like most pre-war nationalists, saw the Emperor as a demigod (literal or otherwise) and thus the soul of Japan. By renouncing his divinity, in Mishima's view, the Emperor had effectively deprived Japan of the entire basis for its society and thereby left it broken. To save Japan, the Emperor would need to be restored to full power and reclaim his divinity.

As part of his attempts at praxis ("Harmony of Pen and Sword", he called it) Mishima started a militia called the Tatenokai (楯の会, "Shield Society") so he and his friends could LARP as Imperialists with the official stated goal of "protecting the Emperor". Most of Japan wrote it off as another of Mishima's eccentric dalliances (he was into UFOs for a while), at least until his coup attempt. In fact, Mishima's clout meant that the Japanese Self Defense Forces (of which Mishima was briefly an enlistee) actually allowed him and his private army to train on military facilities alongside real soldiers.

One of the bigger sticking points about Mishima among his far-right fanbase is his sexuality. Throughout his life, Mishima flirted with homosexuality having affairs with several men and traveling in Tokyo's gay community, and was in all likelihood bisexual. It's something both his widow and his army of decidedly homophobic followers will either deny or refuse to talk about (in fact, when the 1985 biopic Mishima: A Life in Four Chapters was being made, his widow threatened to sue the producers for depicting her late husband as bisexual, and the studio was flooded with angry letters and death threats from Mishima loyalists).

Mishima's perspectives on his sexuality are actually in keeping with the samurai he idolized, since male homosexuality in Japan's feudal era (particularly among the samurai class) was accepted and tolerated. It's only (ironically) with Japan's Westernizaiton in the Meiji era that they became less tolerant, in order to conform to then-contemporary attitudes about sexuality in Europe and America. Just don't tell that to the army of wannabe LARPing samurai in Japan's far-right.

Today, Yukio Mishima is probably best known for that one time he tried to overthrow the Japanese government and restore the monarchy, a would-be revolution that failed so hard that it ended up defining his entire legacy after he fucked-up even committing suicide (more on that below).

The incident occurred on November 25, 1970 when Mishima and four other members of his private army entered the office of the Ichigaya JSDF Base's commanding officer under false pretenses, and proceeded to take him hostage while barricading the doors. Threatening to kill the general and themselves if the base's officers didn't follow his demands, he ordered the base's entire personnel to gather outside the headquarters building where he would deliver a speech.

Mishima's speech was intended to inspire the soldiers to revolt against the government, but Mishima's rhetoric didn't work on the masses like he had hoped and instead he spent most of the speech getting heckled. It didn't help that Mishima hadn't bothered to bring a megaphone or any other amplification device, so most of his words were completely inaudible to the crowd. He was later drowned out by a nearby news helicopter.

With his hope for a coup d'état an abject failure, Mishima and his second-in-command proceeded to give the traditional Imperial kowtow "Tennōheika Banzai" (天皇陛下万歳, "Long live His Majesty the Emperor") before committing seppuku. However, he bungled this as well, with his assigned decapitator unable to behead him, forcing him to hand the sword off to someone else to finish the job.