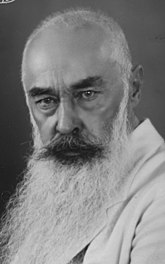 Sigurd Wettenhovi-Aspa (born Wetterhoff-Asp[1], 1870–1946) was a Finnish sculptor and painter. However, his artistic works have been completely superseded by his crankery about pseudohistory, pseudoarchaeology and pseudolinguistics.

Many of the beliefs supported by Wettenhovi-Aspa stemmed from his status as a Theosophist.[2]

The Finns were, according to Wettenhovi-Aspa, the primordial nation from which all other nations ultimately derived. However, Finns had not always lived in the Nordics, but instead had travelled from the island of Java and had temporarily settled in Egypt (Äijäkupittaa).[3] There their Finnish language left several words in the local lexicon, such as

From the mighty Fenno-Egyptian empire civilization would slowly reach the entirety of the world, leaving behind words and proper nouns such as

[note 3] and published in 1835/1849, later to take the position of the national epic of Finland, was characterized by Wettenhovi-Aspa as in fact the oldest book in existence. He claimed that it was an accurate representation of history and even that it was a medical authority.[2]

Wettenhovi-Aspa was in regular correspondence with the Swedish writer August Strindberg,

who in turn believed the origin of all languages to be found in Hebrew.[5] He also had a predecessor in the 18th century Finnish bishop Daniel Juslenius

who believed Finns to be one of the lost tribes of Israel.[3]

As time went on, Wettenhovi-Aspa became more and more associated with the extreme right. He served as the head of a prison camp after the Finnish Civil War,

supported Adolf Hitler and called people who criticized him Jews.[2][3]

Wettenhovi-Aspa's merits as an artist are not entirely insignificant. He was educated in Denmark by Peder Severin Krøyer

and studied at the Danish Royal Academy of Fine Arts. He also won two medals for his artwork in France in 1895,[1] although his fellow artist Albert Edelfelt

[note 4] did characterize his beliefs as "pretty goddamn insane" as early as 1893. Significant trouble assessing his artistic legacy stems from the fact that it is littered all over the world in who-knows-where – not unlike the Finnic influence he claimed, actually.[2]