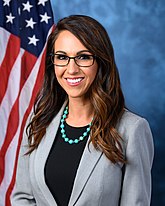 Lauren Opal Boebert (1986–) is an American high-school dropout who only just got her GED (high school equivalency degree) in May 2020 (after she began running for office),[2] QAnon nut,[3] and Representative for Colorado's 3rd district, which comprises much of the Colorado Western Slope.

If Marjorie Taylor Greene is your conspiratorial aunt, then Boebert is your gun nut aunt (which one is crazier is up for debate), and the election of these two in 2020, as well as Louie Gohmert joining the fun the year after, AND Mayra Flores being elected in 2022, sadly means that QAnon is better represented in the House of Representatives than openly nonreligious people, of which there is only one.

Despite being supposedly a pro-"law and order" candidate who opposes Black Lives Matter,[4] she has quite a long list of crimes. She has been arrested and court summoned at least four times, one for alleged harassment, another for an altercation with police, a third for missing a court deadline, and a fourth for reckless driving.[5] She has also been fined for a number of speeding incidents, failures to use seat belts or child restraints, and more petty things like expired plates and improper proof of insurance.[6] Her husband was also arrested for indecent exposure to a minor in 2004, and days later would be arrested for domestic violence;[7] she would marry him a year and a half later. She apparently doesn't have adequate responsibility to drive a car or show up to court when ordered; would you want someone like this open-carrying near you?

How she became a gun nut[edit]

Boebert has frequently told variations on a story during and after her campaign about why she decided to open carry a gun at her restaurant in Rifle, Colorado. The stories have either claimed that either that a man was beaten to death outside her restaurant (Shooter's Grill) or that there was a violent incident outside her restaurant. The reality is that two men got in a fight over drugs; one of the men (Anthony Green) knocked the other down detaching the downed man's artificial leg. Green then fled the scene and collapsed in front of an abandoned store where he was found dead; the cause of death was ruled methamphetamine intoxication. The incident did occur in Rifle, but none of it occurred in front of Boebert's restaurant.[8] Why did Boebert decide to open carry? Perhaps we'll never know.

See the main article on this topic: Militia movement

If her criminal history isn't enough, she also has close ties to extremist right wing militia groups. She has hired the Three Percenters, a far-right anti-government militia operating in the U.S. and Canada that has been labelled as Canada's "most dangerous extremist group" by anti-terrorism experts,[9] as security for her campaign events.[10] She also appeared with a group of Three Percenters and Proud Boys in a protest against red flag laws.[11] She was additionally following multiple QAnon accounts (despite her claiming not to "follow" QAnon), which led to her deleting her channel.[12] and continued to make multiple references to QAnon on the campaign trail.[13]

She has a history of downplaying the severity of the COVID-19 pandemic. She kept her restaurant open despite a cease-and-desist letter from the sheriff's office and a later suspension of her restaurant license.[14] She largely campaigned off of opposing the government's COVID restrictions, advocating an approach similar to South Dakota, where they didn't shut down the state, didn't require masks, and allowed large gatherings at special events.[15] This strategy led South Dakota to have the highest COVID daily death rate in the nation, despite its rural nature, meaning that it shouldn't have been hit as hard as more urban areas such as California.[16] Her campaign rallies were largely maskless super spreader events.

"Is it true that you were live-tweeting from the floor our location the people on the outside as we were being attacked, Lauren?" — Representative Jaime Herrera Beutler, R-Washington
"Umm, yes. Those tweets did go out and that was something that was live and public information. It was broadcast live." — Boebert
"So don't ask us about security if you're telling the attackers where we're at" — Beutler[17]

She was a huge supporter of Donald Trump's false claims that he was the real winner of the 2020 U.S. presidential election and that it was "stolen" from him.[18] She was an invited speaker in the March for Trump/Save America rally, which directly preceded the 2021 U.S. Capitol riot.[19] During the riot, she tweeted the location of Nancy Pelosi, which resulted in widespread calls for Boebert to resign.[20] The fallout from the insurrection led to the resignation of her communications director.[21] Worse still, she voted to overturn the results of the election in the immediate wake of the riot.[22]

See the main article on this topic: Transphobia

She opposed the Equality Act for transphobic reasons, saying, "Where is the equality in this legislation for the young girls across America who will have to look behind their backs as they change in school locker rooms just to make sure there isn’t a confused man trying to catch a peek?", reinforcing the myth that trans women would rape young girls en masse if they were allowed in locker rooms and women's bathrooms.[23] This ignores the reality that trans women tend to get assaulted vastly more in men's spaces.[24] These remarks earned her the condemnation of not only many Colorado lawmakers but also the LGBTQ caucus.[25] She has said that she is raising her boys "to be men" and is "proud of that" regarding her opposition to puberty blockers, while also espousing homophobic stereotypes and spouting bogus claims that puberty blockers can cause cancer, brain damage, and sterilization when they're totally reversible.[note 2][26][27]

Boebert has been accused of Islamophobic remarks towards Congresswoman, Ilhan Omar. One such statement involved calling Omar the "jihad squad".[28]

She asked a group of Orthodox Jewish visitors to the Capitol if they were doing "reconnaissance", and when called on it she claimed she was just joking.[29] Like her fellow loon Marjorie Taylor Greene, she has been known to compare vaccines to the Holocaust.[30]

See the main article on this topic: Theocracy

Despite having sworn to "support and defend the Constitution of the United States" in her Congressional oath of office, Boebert is openly hostile to separation of church and state, the second clause of the First Amendment:[31][32]

The letter to which Boebert was referring was Thomas Jefferson's Letter to the Danbury Baptists, which used the phrase "separation between Church & State" in explaining the First Amendment.[33]