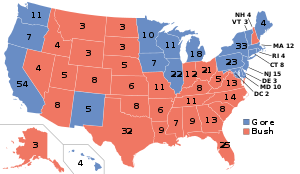 All because people in Florida don't know how paper works. [1]

Coming down from the high of the Clinton '90s, many comparisons between Vice President Gore and the other guy were downplayed and likened to "Tweedle-Dum and Tweedle-Dee."[3] While the media proceeded to do little to expose what in hindsight were pretty significant ideological differences between Bush and Gore, and even between Gore and Clinton, some hippy also ran, hijacking the late Gen X/early Millennial vote from Gore (and even poaching some votes from Bush).

However, it became clear, both for America and the entire rest of the world, that thousands of voters in Broward, Volusia, Miami-Dade, and Palm Beach counties possessed the collective IQ of a sea cucumber. These voters evidently had no idea what the hell they were supposed to do in the voting booths, and did things to the ballots that defied any kind of logic. Several thousands of people were apparently intent on voting for two presidents, or just seemed interested in wholly or partially punching out random holes in their ballots to see what would happen; the answer, as it turned out, was a totally FUBAR

result. Further adding to the confusion was the notorious "butterfly ballot" used in Palm Beach, where around three thousand people apparently managed to accidentally vote for Pat Buchanan because they couldn't be bothered to actually follow the arrows on their ballot.[1] Palm Beach County happens to have one of the highest concentrations of Jewish people in the country (approximately 255,000, or around 20% of the county's total population), which made the number of votes for Buchanan especially improbable, given his open anti-semitism.

Purple states were also born, these are swing states.

None dare call it treason