This patent medicine label seeks to ascribe its virtues to the herbal lore of Native Americans. 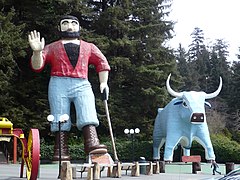 Many familiar elements of the Paul Bunyan story, such as Babe the Blue Ox, were invented by known authors for an advertisement campaign.

Fakelore is manufactured folklore, a literary tale presented as folklore rather than as the invention of its author; folklore that is inauthentic or not genuinely traditional. The key difference between fakelore and genuine folklore is that fakelore will be represented as being somehow traditional when it has in fact been newly coined, usually by an identifiable author.

Fakelore is often intentionally quaint or old-timey, and not infrequently has some kind of commercial or moralistic agenda, while genuine folklore responds to live concerns among the people who circulate it, and is often "repetitive, clumsy, meaningless and obscene".[1]

"Real" folklore is usually much younger than commonly perceived, and much of it was "rediscovered" or invented out of whole cloth in the nationalism craze of the early 19th century, in the cause of nationalist pseudohistory.[citation needed] That is not to say the tales (whether "real" folklore or not) aren't entertaining, but their value as historical or anthropological documents has to be judged with that in mind.

There is also commonly confusion in the popular mind between writers such as the Brothers Grimm who claimed to be serious recorders of folk tales (although there is controversy over how much of the original stories they changed), and writers like Charles Perrault or Hans Christian Andersen who aimed to write moral or entertaining stories for children but did not pretend to catalogue existing folk traditions and therefore did not (intentionally) write fakelore even if their stories have now become part of wider culture and tradition.

In search of the primitive[edit]

Fakelore, unlike folklore, often has a fairly obvious motive. People seek to invoke the authority of immemorial tradition for whatever it is they're selling. Fakelore is also created by alternative medicine businesses, which often present their wares as being part of a tradition of natural healing—the idea being that their wares are concocted from herbs and plants that have been used in folk medicine.[citation needed]

A similar vein is found in some martial arts schools. Exposure to wuxia

and similar philosophies, and other orientalizing woo into the disciplines and exercises of the martial arts. A number of white North American authors have written poetry pretending to be east Asian, including "Yi-Fen Chou

Native Americans have frequently been appropriated as mouthpieces for various sorts of fakelore, often with a conservationist or environmentalist agenda. The noble savage stereotype is the typical motivation for the creation of fake Native lore — the idea being that Natives live at peace and oneness with the earth and are repositories of ancient wisdom about ecology and herbalism.[citation needed]

Greenpeace's flag ship Rainbow Warrior was named after a bogus Native American prophecy that allegedly foretold the rise of the environmental movement.[12] The actual origin of the alleged prophecy is a 1962 book titled Warriors of the Rainbow by William Willoya and Vinson Brown. The book was in fact an evangelical Christian tract that aimed at the conversion of Native Americans to Christianity.[13] It follows the long tradition of attributing noble or sentimental words to Native Americans, such as:

There is also a long tradition of Whites posing as Native Americans, often to deliver some kind of woo-laden message that would sound better in the mouth of a noble savage: 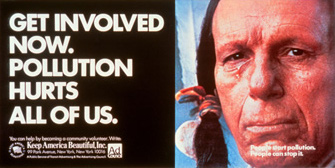 , another book by a White author for a White audience, which is based on a series of interviews with Black Elk, a Lakota holy man, mediated by Black Elk's son as translator. While New Agers find inspiration in the book, the Lakota do not find it authentic to their traditions, and the accuracy of its account has been questioned by scholars who have edited and examined the original materials.[18]

were sold with a tale of a fictitious "Dr. Morse", who spent three years among the Natives and returned with their traditional herbal remedy secrets. No Dr. Morse was ever affiliated with the business. The celebrated Kickapoo Indian Medicine Company of Connecticut hired many Natives (not many Kickapoos, though) to stage Wild West shows to promote their concoctions. They, too, were vaguely alleged to derive from Native herbal knowledge.

In recent years, children's readers and textbooks include alleged folktales from non-Western cultures, in an attempt to appear multicultural. Unfortunately, few genuine folktales are well suited for the purposes of the editors of the books in question. They are, after all, the products of non-Western cultures. They are often morally ambiguous and inconclusive. They may contain adult humor. They may also refer to non-Christian deities and polytheistic religious values. The gods of Greece and Rome were not chaste or non-violent,[19] and neither are the gods of many other polytheistic religions. As Eliot Singer notes, "Real myths are usually complex, sometimes long, full of death, violence, retribution, hatred, sex, bodily function, and gruesome imagery. They are likely to have closure that is unfamiliar or uncomfortable."[20]

They do not share the ideas of contemporary Western educators about, say, the level of violence appropriate for children's reading. They do not share Western attitudes towards phlegm or excrement, or the appropriate treatment of such themes in children's literature.[21] Collected tales from an oral tradition are told using techniques appropriate to oral performance. The need to adapt these tales to the familiar narrative structures used in printed stories inevitably alters and distorts them.[20]

But educators wish to present non-Western material in their textbooks. To avoid the risk of material that may lead to actually expanded cultural horizons, the sources are bowdlerized and distorted, with frequent outright invention. Editors make the source material comfortable, teachable, and conforming to Western narrative structures and Western received ideas about childhood. In doing so, they conceal the "otherness" of the non-Western cultures they supposedly represent.[20]

The northwestern Native character "Mucus Boy" turns into "Clamshell Boy". Trickster figures generally don't make good role models; they suffer serious distortion at the hands of editors who want more conventional heroes. Coyote doesn't generally learn a moral lesson about laziness in authentic folktales, but he does when the folktale "Coyote Goes for Salt" is turned into the children's book Coyote and the Dancing Butterflies. Ecological piety and other approved-for-children agendas are often written into traditional lore in a way that distorts them, as in the children's book The Prince and the Salmon People. Its editors altered a traditional story about the relationship between humans and salmon into a "powerful, timely message" about "overfishing, concrete dams, polluted rivers, and hatchery fish".[20]

Compare the frequent omission or deliberate mistranslation of Shinto themes in commercially distributed English versions of children's anime, the removal of even innocuous nudity, and the alteration of gay and transgender characters.[22][23]