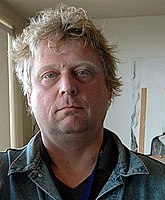 Just admiring the massive zit between my eyebrows

Theo van Gogh (1957 – 2004) was a Dutch film director, writer, and publicist who was brutally murdered by the Islamist radical Mohammed Bouyeri

on the streets of Amsterdam in 2004. During his lifetime, he was the enfant terrible of the Dutch film scene and a vocal critic of conservative religious norms. And, let's get this out of the way first, Theo was indeed the great-grandson of the brother of famous painter Vincent van Gogh,

if you really want to call that related. Though, the fact remains – he was a bit of a dick.

On 2 November 2004, van Gogh was shot multiple times while riding his bike on his way to work. After being shot, van Gogh tried to crawl away and collapsed on the neighboring bike lane; there he was stabbed multiple times by the murderer before bleeding to death. Before leaving the scene, the murderer stuck a knife in van Gogh's body which had a note with death threats to Ayaan Hirsi Ali and Jews written all over it.[1] Ayaan Hirsi Ali quickly went into hiding after the attack and later left the Netherlands. The murderer was caught that same day, after being shot in the leg during a firefight with police officers. Notes in his pockets showed he wanted to die as a martyr, one poem reading (in Dutch):

This is it, my last word, pierced by bullets, drenched in blood, as I had hoped —Bouyeri

The brutal murder was a shock for the Dutch people, who tend to think – quite naïvely – that "things like that" happen in other, bigger countries but not in the cozy-schmozy Netherlands. It didn't really help the knee-jerk reactions that Bouyeri's statements in court were quite radical to the atheist ear. "I acted out of faith," he stated in court when questioned about his motives "I've already told you that, if he [van Gogh] had been my brother or my father, I would have acted the same." Bouyeri professed that van Gogh was an 'enemy of Islam', and that he was aiding the 'war on Islam' which was supposedly raging in the media.[2] The murder still stands today as the only successful attack by Islamist radicals in the Netherlands and therefore is often used as a boogeyman in the category You might get shot by terrorists if you say Islam is bad!! After the Charlie Hebdo attacks in January 2015, the van Gogh murder was often brought up as a comparable incident, to show that 'nothing has changed' or 'things have gotten worse' since 2005. The murder is often connected with a wave of negative sentiment towards Islam and the rise of notorious scaredy-cat Geert Wilders in Dutch politics.

While the murder of van Gogh has been universally denounced, disagreement in Dutch society over van Gogh's opinions and its presentation has risen. While a famous critic of religious and societal norms, van Gogh wasn't really the most eloquent writer in the business. He was well known for consistently calling Muslims 'goatfuckers'[3], dubbed Jesus the 'rotten fish of Nazareth'[4] and made jokes about the Holocaust, with phrases such as 'copulating yellow stars in the gas chamber' and 'the smell of caramel because they're burning diabetic Jews'.[5] While these are of course extreme examples, Theo van Gogh often expressed himself in this confrontational style and there is still much discussion over whether he should be seen as a 'martyr' for free speech or someone who willingly made those statements to piss people off. The truth is probably somewhere in the middle, and most people seem to agree that he was not a very subtle personality. Regardless of him being an asshole, the broad consensus is he shouldn't have been killed for his views.