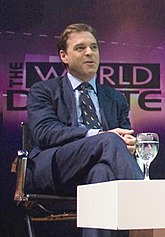 Niall "...for Germany"[2] Ferguson (1964–) is a Scottish historian revisionist who was appointed senior fellow at Stanford University's Hoover Institution in July 2016. Previously, he was Laurence A. Tisch Professor of History at Harvard University and CES Resident Faculty.[3] Criticized for being an anglocentric apologist for Empire, Ferguson is among the world's most well-known economic historians and created a number of TV documentaries (attempting to make massive credit and financial organisations intelligible to the average Joe).

Blow the horn of Helm Hammerhand![edit]

See the main article on this topic: Eurabia

Ferguson is not a huge fan of the Muslims living in Europe, and fears that the continent will eventually succumb to "the fatal embrace of Islam."[4] He married ex-Muslim Ayaan Hirsi Ali in 2011, who would have never been able to seek asylum in secular nations if Eurabia was actually taken seriously by politicians. Ferguson had left his wife and three children for her—they have since had a son, Thomas.[5] He is an atheist, born and raised.

See the main article on this topic: Pseudohistory

As a historian, Ferguson is at best a bit of a weirdo who claimed in an "alternate history" scenario that had Britain stayed out of the First World War, it would have prevented communism, socialism and the EU from existing.[6] He's written similarly contrarian works on the British Empire (Empire) and World War II (The War of the World), which bemoan the imminent decline of Western Civilization. His more overtly crankish books are Colossus, a blueprint of how America should run the world, and Civilization, ethnocentric cheerleading about how everything culturally or scientifically worthwhile came from Europe or America.[7]

Most recently, he's published the first volume of an authorized biography of Henry Kissinger. The book has already received criticism for its fawning tone towards its subject[8] and for trivializing "loss of life in strategically marginal countries" wrought by Kissinger's actions.[9] So with this stroke of his pen, Ferguson consigns the victims of the Vietnam War, Pol Pot, Augusto Pinochet, Bangladesh, and Indonesia's invasion and subsequent occupation of Timor-Leste to the dustbin of history.

In the same vein, Ferguson has shacked up with PragerU, pushing their particular brand of bizarre, right wing worldview with fawning videos on Margaret Thatcher, how wonderful a time he had becoming a US citizen (in the age of Trump), and why “The West” has just such been so darn good at making money.[10] This development could arguably be seen as an example of Ferguson’s (d)evolution from producing provocative, conservative “what if?”-historical scenarios, over conservative panegyrics, to, at the very least, being an enabler of (out)right pseudohistory by lending his professional reputational credit (whatever it’s worth these days...) to PragerU.

See the main article on this topic: Imperialism

Ferguson was a vocal supporter of the Iraq War and called himself "a fully paid-up member of the neoimperialist gang."[11] He was also a Mitt Romney supporter. He wrote a criticism of Obama in Newsweek that threw all history out the window and made Harvard the target of mockery for a while.[12] He's since been credited as one of the reasons why the magazine fell apart in 2012.[13] He's also on record claiming that Obama is like Felix the Cat because both are "black and very, very lucky."[14]

When asked what he thought of Keynes' famous quote "in the long run we are all dead", he replied with "Keynes was a homosexual and had no intention of having children. We are not dead in the long run … our children are our progeny"[15]. This is, of course, complete nonsense. He issued an apology on his website later, calling his remark "insensitive and stupid". We are still waiting for a similar apology for the rest of his career.