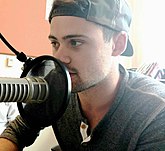 Allsup at the KZUU radio studio in 2016

James Allsup (1995–) is an alt-right commentator who self-identifies as a "right-wing libertarian",[2] though it's very clear to anybody sensible watching him that he's a neo-Nazi.

Allsup was a former Associate Editor at The Liberty Conservative[3] and runs the Nationalist Review with Nicholas Fuentes, despite the two splitting up after a dispute.[4] He was suspended from Twitter as of December 26, 2017.[5] In August 2019, his YouTube channel was terminated for violating YouTube's terms of service.[6] Before his channel was terminated, Allsup had over 451 thousand subscribers and 73.5 million views.[7]

"Remember the Holocaust, go- I mean, nationalist! The six million are YOUR fault!"[20]

These are two of the three men the rootless international cosmopolitan

You have these groups like these Hispanic advocacy groups, La Raza, the different black advocacy groups. For a while, their grievances have been kept at bay by the rootless, transnational globalist elites that control a lot of what's going on.[22]

Allsup also has a page on "Hatreon",[54] and he has sourced content for a video from at least one alt-right website. In "20 More Answers for Black People", Allsup links to an article from The Alternative Hypothesis.[55] The about page for the website states that "we exist within the online community of people which has become the alt-right".[56] Allsup has even admitted that he has referenced bits from alt-right and white supremacist blog The Right Stuff.[57] In September 2017, he appeared on a podcast called Fash the Nation.[22] If all of that wasn't enough, he is a member of the neo-Nazi group Identity Evropa.[58]

He participated in the August 2017 white nationalist rally in Charlottesville.[60] According to Allsup, Charlottesville victim Heather Heyer was killed "accidentally".[61]

In August 2017, Allsup was reported to have made racist remarks to his driver as they passed by the National Museum of African-American History and Culture. This subsequently led to him being asked to leave the car, followed by his banning from using Uber.[62]

Surprisingly, Allsup was elected as a precinct committee officer for the Republican Party in June 2018, which was met with fierce opposition from the Republican National Committee.[63] Upon discovering of Allsup's reputation, the Republican Party demonstrated a stopped clock moment by wisely voting to effectively strip him of his powers in January 2019.[64]

Being associated with the alt-right, it should not be a surprise that Allsup has been at odds with moderate conservatives.

Appearance on The Michael Knowles Show[edit]

Shortly following the Unite the Right rally, Michael Knowles of The Daily Wire interviewed Allsup concerning the rally.[65] The interview was criticized by fans of Allsup, who accused Knowles of not letting Allsup speak and, in one YouTube commenter's words, "mak[ing] James Allsup contradict himself by twisting his questions around."[66]

Allsup, despite admitting to initially having been a fan of Ben Shapiro, has criticized him for multiple reasons, including his supposedly "irrational dislike for Donald Trump".[67]

A video in October 2017 had Allsup criticizing Shapiro for removing a video from the The Daily Wire YouTube channel that had been criticized by the latter as being culturally insensitive towards Native Americans.[68] Allsup, after first bashing how Shapiro disavowed the alt-right and for wisely saying that ideology matters more than skin color, proceeded to label him a "cuck" for not "playing to win". Apparently, "playing to win" means "stirring up racial controversy in hopes of getting one's point across".

He has also whined about Shapiro's statement during his appearance on The Rubin Report about targeting racists and destroying their careers.[69]