Hagee giving us a taste of what God will do to those who subscribe to the homosexual agenda.

John "Poor Man's Falwell" Charles Hagee (April 12, 1940–) is an ignoramus whackjob televangelist preacher, rewarded for his great service by the American public to a personal net worth of $5 million dollars.[2] Hagee is the founder and senior pastor of Cornerstone Church in San Antonio, Texas, which is a megachurch claiming more than 20,000 active members.[3]

Hagee is the President and CEO of John Hagee Ministries, which telecasts his national radio and television ministry carried in the United States on ten television networks, including 62 high-power stations aired to more than 150 million households and - via other nonsensical faith channels - various nations throughout the world. Hagee has been criticized and incurred controversy for his support for Israel (mainly the reasons he gives for said support), for his comments based on religious beliefs regarding Islam and Catholicism, and for his quest against homosexuality.[4]

Hagee is a global televangelist. He largely preaches on political subjects and is extremely conservative, although he endorsed a moderate, former Republican Presidential candidate John McCain. Hagee suffers from obvious cognitive dissonance issues since he believes that liberals and ultraconservative islamists are sides of the same coin since they both hate America and Christianity.[6] He is notorious for a "fire and brimstone" style of preaching and intolerance toward homosexuality. He believes in government-enforced morality, almost to the extent of theocracy. Predictably, he's not real fond of rock and roll or Harry Potter books, either.[7] He runs John Hagee Ministries which sends Hagee Hate to many countries around the world. His son Matthew, the sixth generation of the family to be involved in evangelism, assists him and does much of the televangelism.

Hagee believes that Hurricane Katrina was God's punishment for American toleration of homosexuality (although the French Quarter, possibly the gayest part of New Orleans suffered little, proving, if anything, God's countenance for all his gay and other perverted children).[8]

Hagee teaches the Prosperity Gospel and some impoverished supporters claim they have been pushed deeper into poverty through tithing.[9][10]

Hagee's message to atheists who would rather not hear Merry Christmas, "Planes are leavin' every hour on the hour. Git on wun!"[11]

, incorporated on February 7, 2006.[13] Hagee also claims that a "half-breed Jew" named Hitler was sent by God to help bring about the establishment of the state of Israel through persecution of the Jews, and therefore the Holocaust was really God's will.[14] He called for a pre-emptive military strike on Iraq by the US and Israel. Hagee is on record as calling the Catholic Church "the great whore".

Despite being a close ally of Israeli Prime Minister Benjamin Netanyahu via his organization Christians United For Israel, Hagee subscribes to the anti-Semitic International Jewish conspiracy. In 2003, he "claimed European Rothschild bankers, along with David Rockefeller, controlled the U.S. economy through the Federal Reserve—which according to Hagee was bankrupting average Americans by devaluing the dollar." He further stated that the financiers were in cahoots with a satanic Illuminati plot.[14]

Hagee claims that God is planning to whack roughly 100 million 'mericans in the End Times because of abortion and because Noah's Ark did too exist;[16] on a similarly tolerant note, Hagee stated that Sodom and Gomorrah was "God's pilot study for his response to the homosexual society."[17]

John Hagee has also gone on record as stating that Barack Obama will give the US a case of armageddon cooties if he gets re-elected, so your entertainment mileage viz-a-viz Hagee's proclamations may vary.[18] Hagee didn't change his mind after Obama's re-election; he just added a touch of 0N3 W0RLD GUMM1NT fear to the mix for good measure.[19] Hagee's prophetic track record approaches that of Hal Lindsey, author of the 1981 eschatological masterpiece The 1980s: Countdown to Armageddon.

Hagee now says four successive lunar eclipses signal God's plan to send something unspecified, possibly the start of End Times. Before October 2015, Hagee said. "I believe that the heavens are God's billboard, that He has been sending signals to planet Earth, and we just haven't been picking them up. God is literally screaming at the world, 'I'm coming soon.'"[20] The world awaits (whatever) that could be as spectacular as the 2012 apocalypse! 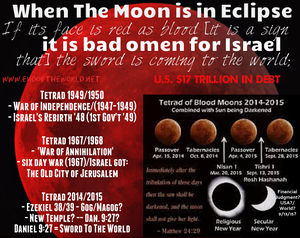 As the first two eclipses went by without any indications from The Big Guy In The Sky that they were significant, more and more were shoehorned into Hagee's Theory. Past Tetrads, for example, happened at the same time some significant event occurred in Israel. On this Tetrad, not only does Passover start on the exact same date as the first and third eclipse, and the tabernacle on the second and third, but in between both will be a total solar eclipse, seen in Jerusalem (this is important to the theory, especially since the first three weren't seen in Israel).[23]

The 2015 Tetrad ended in September and John's predictions of doom have not come true yet again. It is nearly certain his followers don't take Matthew 7:15 as the word of God as the world waits with resignation bated breath for his next prediction to be made and fail miserably.