The alleged Holy Lance, part of the imperial regalia of the Holy Roman Emperors.

The Holy Lance, Holy Spear, Spear of Longinus, or Spear of Destiny is an alleged relic from the crucifixion of Jesus: a spear used to puncture his torso to determine that he was dead. It makes its brief appearance in the Bible at John 19:34:

None of the synoptic gospels mention this incident. But, as with the True Cross, the many nails apparently needed to crucify Jesus, and just about any artifact mentioned in the several accounts of Christ's passion, it was miraculously multiplied by the medieval relic industry.

"Longinus" is a name given by Christian folklore to the soldier who wielded the lance. He appears first sometime around the middle of the fourth century in the apocryphal Gospel of Nicodemus, although he really isn't given a speaking role there either:[1]

Other Christian folklore identifies Longinus with the unnamed soldier who says "Truly this man was the son of God"[2], so the legend of "Saint Longinus" was started. Longinus probably was named after the Greek word for spear used in the text, λόγχῃ (lonchē), also cognate with Latin lancea and English lance.

The Roman version of the Holy Lance. The point was broken off and sent to Constantinople, where it was incorporated into an icon, now lost.

Rome is home to one such Holy Lance. This one is at least reported since around 570 CE, if you believe the report of Antoninus of Piacenza that he saw both the lance and the crown of thorns preserved in Jerusalem. This one has a complicated history. It was captured by the king of Persia, then sent to Constantinople, and then captured by the Turks at the fall of the city. It was ultimately given as a bribe by the Ottoman Caliph Bayezid II to Pope Innocent VIII because the Pope had Bayezid's brother prisoner and Bayezid was best pleased that he be kept that way.[3] This version is now in Rome.[4]

Another relic claiming to be the Holy Lance is preserved in Echmiadzin, Armenia. This one has been reworked to form a cross. It's attested from the 13th century forward.

Yet another was recovered during the 11th century siege of Antioch during the First Crusade, in which a vision came to one Peter Bartholemew telling him where to look. Its discovery rallied the Crusaders and enabled them to break the siege.[5]

There's also supposed to be one in Krakow, Poland that's a copy of the chief one in Vienna, Austria. King Athelstan of England is said to have had one, but it has been misplaced.

None of these other Holy Lances are the Holy Lance. The Holy Lance that everybody makes a fuss over is the one kept in Vienna, where it formed part of the regalia of the Holy Roman and Austro-Hungarian Empires. This one appeared first at the coronation of Emperor Otto I in the late 10th century. The Roman emperor Constantine I is supposed to have owned it earlier, and Constantine also bound a nail from the Crucifixion in it. Later Holy Roman Emperors had a silver sheath attached to better bind the nail to it, and then a gold sheath to attach the silver sheath better.[6]

No particular healing legends or other powers were ascribed to this relic, which rather served as a symbol of imperial power among the German and Austrian emperors. It acquired them in much later, and post-Christian, folklore. 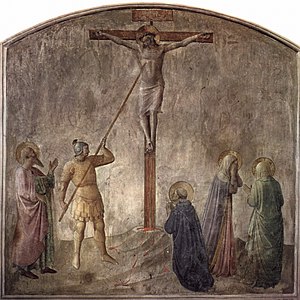 The Holy Lance in use. Painting by Fra Angelico.

The Holy Lance, as an occult relic, figures in the plot of Richard Wagner's Parsifal, which is ultimately based on a poem by the 13th century Minnesinger Wolfram von Eschenbach.

In the opera, King Amfortas (based off of the Fisher King of Arthurian lore) has been wounded by the Lance[8], resulting in a magical wound that will not heal. The lance is then stolen by the evil wizard Klingsor, and it of course becomes the task of the titular hero Parsifal (Sir Percival, from Arthurian legends) to go on a quest to fetch it back. After the typical travails involving seductive flower maidens, dead swans, and mysterious hermits, Parsifal succeeds in recovering the Lance. When he touches Amfortas, he is both healed of his wound and absolved of his sins.

Nietzsche absolutely hated this; Wagner's use of Christian symbols and values was something he considered a betrayal:

Others have asserted that the opera ties into Wagner's anti-Semitism and that the villain Klingsor is a Jewish caricature. These claims also seem rather far-fetched; nothing in the libretto itself directly supports them.[9] The Christian and un-Teutonic themes in Parsifal allegedly also made it Hitler's least favorite among Wagner's operas. The opera, which was by Wagner's intention only supposed to be performed at Bayreuth, was not performed there during the Nazi regime, though it was staged at Berlin.[10]

Trevor Ravenscroft's 1973 book The Spear of Destiny[11] placed the Holy Lance in a New Age conspiracy theory. This theory gives mysterious powers that supposedly come with possession of the lance. Hitler, according to Ravenscroft, was obsessed with the lance, and the actual point of World War II was to enable Hitler to capture it.

Losing the lance, however, results in the downfall of the former owner. Ravenscroft asserts that Hitler fell as a result of losing the lance. Later, the lance allegedly came into the possession of American General George S. Patton after the end of the war. His death following an automobile accident was the result of giving away the lance, having returned it and the rest of the Imperial Regalia to Austria.

According to Ravenscroft, the lance is actually an unholy lance, and serves a malevolent spirit (spirits?) who may be the Antichrist, though Ravenscroft dances around the issue rather daintily. In other sources such as the Theosophist Alice Bailey, this idea is linked with the Theosophist belief that the Antichrist is not a person but forces of destruction that occasionally manifest to fuck shit up for the evulz.

Dr. Howard Buechner, a medical professor at Tulane, builds on Ravenscroft's themes with his two books on the lance, Adolf Hitler And The Secrets Of The Holy Lance and Hitler's Ashes — Seeds Of A New Reich.[12]

Buechner claimed to have been contacted by a U-Boat captain, who affirmed that the Lance in Vienna was a fake. As to where the Spear actually was? Why, spirited away with other Nazi treasures by U-Boat to Antarctica along with a mountain of Nazi gold, of course! Afterwards, the Spear was supposedly recovered (improbably enough) by a Nazi secret society and hidden away in Europe somewhere.

The Holy Lance, typically under the name of Longinos, is featured in a number of pop culture works that include Neon Genesis Evangelion, where it can both penetrate the shields used by "Angels" and immobilize beings of god-like power[13], a way to explain why Superman and other superheroes were unable to go to either Berlin or Tokyo to defeat the Axis after Pearl Harbor,[14] or echoing the Biblical origin as well as being, er, inspired by Evangelion a weapon that is -unexpectedly- used to kill the local equivalent of a Messiah, a living god himself. All-American hero B.J. Blaskowicz, the player character in the Wolfenstein series of video games, once stole it from the Nazis.