From RationalWiki
(Redirected from Tupac)
Jump to navigation Jump to search 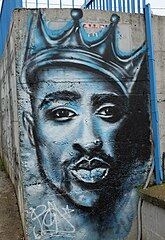 Tupac Shakur (1971–1996) was a renowned American rapper who released several very popular (and by now classic), if rather sweary, albums.

His first two offerings largely dealt with police brutality and racial injustice and were moderate successes. While still sticking to socially-conscious topics, the burgeoning focus on gangsta rap in the hip hop industry left Tupac to reinvent himself as a "thug" and promptly formed a supergroup called Thug Life in 1993, releasing one album that went Gold. However, Tupac's success came amid legal troubles. He shot at two off-duty police officers after he ran into them with his entourage.[5] Suicidal much? In another violent instance, he assaulted one of the directors of Menace II Society

In 1993, he was charged with sexual assault, eventually serving nine months in prison in 1995. As it is often the case when a famous man is accused of rape, some of his most ardent fans were quick to denounce the account of the woman in question.[8] However, both Tupac's and the accuser's stories of their relationship are largely identical to one another,[9] the only difference being that Tupac is making out the accuser to be a slut who demanded the gang rape. In a later interview, the woman who accused Tupac told that the law enforcers who handled the case were more concerned about convicting a famous black man than helping her, a black female victim of rape.[10]

Later, Tupac admitted to hating black women after the charge first came up. This is evidenced by posthumously-released songs recorded during the lawsuit, riddled with nasty attacks on supposed golddiggers.[11] Tupac came to his senses again after he experienced the support he got from black women during the trial and the interaction he had with the black female guards during his term.[9] This episode in his life heavily influenced the lyrical content of his third solo album Me Against the World, which was released during his prison sentence, becoming the first artist to have a #1 album on the Billboard 200 while in prison.

Before he was convicted, Tupac was mugged and shot in 1994 and accused the Notorious B.I.G. and Sean "Puffy" Combs of instigating the attack, marking the beginning of a feud with the two. It shouldn't go unmentioned that Tupac had virtually no evidence for his accusation; what little evidence he did have boiled down to Combs and Wallace associating with drug dealers he had some negative history with (one of them, Jacques "Haitian Jack" Agnant, was his co-defendant in his rape trial, although unlike Shakur he was acquitted). While Biggie occasionally participated in the beef musically (and in one instance was actually humorous about it[12] given the circumstances[note 1]), Tupac, on the other hand, was deeply involved in the dispute, wishing the cruelest deaths on his adversaries, which eventually turned into an obsession bordering on a persecution complex where everyone who was tangibly mentioning the shooting, slightly supportive of his foes at Bad Boy Records, or just any person he had a pet peeve with got a spot on his ever-growing hate list. These did not exclusively include artists from the rival coast of the East-West rivalry

For such a brazen, high-profile attack in a public area, surprisingly little evidence could be found implicating anybody in Tupac's murder. Only one witness came forward but was killed shortly after[17] — however, it's unknown if this murder was related to the Shakur shooting. As such, it has become one of the most famous unsolved murder cases in American history. However, there are multiple theories where nearly everybody involved with the situation is accused of planning the assassination.[18][19] The first claims that Orlando Anderson gunned him down as revenge for their altercation earlier that night at the MGM Grand. He was a suspect in the case but was killed in 1998 in an unrelated gang shootout. The second[20] claims that he was assassinated by The Notorious B.I.G. as the culmination of their heated rivalry, with Biggie paying a Compton street gang $1 million to kill Tupac and supplying them with the weapons to do so. Biggie's own death six months later was a revenge killing. The third — and most controversial — theory[21] claims that he was assassinated by Suge Knight, an all-around shady figure who spent much of the mid-late '90s in legal trouble and bullying the music industry. This theory goes that Tupac was planning on leaving Death Row and signing with another label, a state of affairs that infuriated Knight, and so (with help from crooked members of the LAPD) he killed both Tupac and then Biggie to deflect attention from himself and make it look like their rivalry had gotten out of control. Though keep in mind that Suge Knight was seated next to Tupac when the shooting went down, even being slightly wounded himself. So for this to be true, Knight would have risked his own life during this grand scheme, a thought that is less than tenable.[22] Last but not least, Sean "Puffy" Combs is also suspected of being behind the murder.[19]

In recent years, Duane "Keefe D" Davis, a member of the Southside Crips and uncle to Orlando Anderson, has admitted that Anderson killed Shakur in response to being beaten and that he was driving the vehicle used for the shooting. Multiple members of Knight's entourage (who were predominately members of the Mob Piru Bloods street gang) have confirmed Davis' story and blamed Knight for letting one of his musicians get involved in a matter that should have stayed between the Pirus and Crips. Anderson was killed in an unrelated shooting in 1998 by members of another Crip set. 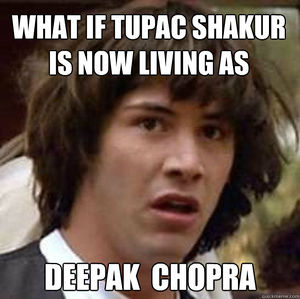