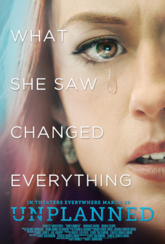 Unplanned is a movie that should have been terminated at script stage a maudlin, emotionally manipulative anti-abortion propaganda movie born unintelligently designed in 2019. It preaches to the choir of the American Republican white Evangelical Christian anti-choice crowd that thinks that showing filmgoers bloody pictures of late-term abortions will melt their hearts and sway their opinions.

Unplanned earned 40% on the Tomatometer[2] and overwhelming critical dislike at Metacritic, at 10 out of 100.[3] However, it was upvote-bombed at both sites by, one suspects, Steve Bannon hordes of true believers, the Westboro Baptist Church, QAnon followers, GitHub bots, and perhaps, just to shake things up, a couple of bored Roman Catholic cardinals.

The film is written and directed by Chuck Konzelman and Cary Solomon, who wrote God's Not Dead and God's Not Dead 2, so why they didn't go with the much better title The Foetus Is Not Dead is anyone's guess oh wait, because the movie and script are based on a memoir of questionable veracity[4][5] by Abby Johnson, a former Planned Parenthood director–turned-anti-abortion activist (except the Bible does not forbid abortion,[6] but let's not get bogged down in details!). That story, by sheer unbelievable chance, also happens to be the plot.

The film strangely does not star Kirk Cameron. Seemingly they could not afford such a big movie star, as they also saved money by using straw men for anyone involved in Planned Parenthood, an organization which, the film is compelled to mention, was funded by George Soros.

Selected coverage of the film[edit]

This abortion-related article is a stub.
You can help RationalWiki by expanding it.
Retrieved from "https://rationalwiki.org/w/index.php?title=Unplanned&oldid=2405098"
Categories:
Hidden categories: