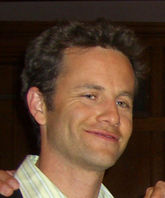 I love a nice, tall glass of smug with breakfast.

Cameron claims he used to be an atheist. Assuming that is true, it's not likely his atheism was well thought out as he claims to have become a saved Christian at age 17.[2]

Cameron's documentary project, Monumental was inflicted upon released in selected theaters across the USA in late March 2012 (with little public attention). The goal of the documentary was Cameron pushing his Christian Reconstructionist views.[3] The documentary was basically Cameron traveling through Europe back to the US, trying to connect with the Pilgrims and Founding Fathers, and trying to find answers from the founders to help solve our current problems. Cameron admitted in the film he is not a historian - this is true, but given that he claims to have done all the research on the theory of evolution yet claims that scientists are looking for crocoducks, the likelihood Cameron can do proper research in history is almost nonexistent.

The documentary was co-produced by Marshall Foster, who sometimes shows up in the film as a guest. Foster is a strong proponent of Christian Schooling and homeschooling, and is a huge fan of R.J. Rushdoony. The documentary included a talk with former Fox commentator Glenn Beck and Alveda King (Martin Luther King Jr.’s niece and a Religious Right activist). Cameron spoke to Christian Reconstructionist ‘historians’ David Barton and Herb Titus (neither of these men are really historians) to find out how evil, atheist academics from Boston (scary music included) lied to Americans about the country’s Christian heritage. Barton said there is a “deliberate attempt” to hide the faith of the Founding Fathers by using “revisionism,” and Titus warned that “a nation that attempts to build a foundation not based on God’s law will ultimately self-destruct.”

In one attempt to show that there is some conspiracy in America to hide its religious roots, Barton shows Cameron an old "Congress Bible" in his collection that was ordered to be printed and distributed to schools. Barton asked a question along the lines of: "if the Founding Fathers were atheists as we are now told, why would they mass distribute Bibles all across the country to be taught in schools? This is proof that the Founders never intended there to be a separation of church and state!" Of course we aren't being told that the Founding Fathers were atheists, but rather that they favored separation of church and state. But be that as it may, Chris Rodda debunked Barton’s story about “Congress’s Bible” many many times[4] noting that Congress simply passed a resolution on the accuracy of the edition of the Bible of printer Robert Aiken and did not purchase or print copies of the Bible, pay for the printing or print the Bible for use in schools. “The words ‘a neat edition of the Holy Scriptures for the use of schools’ are taken from a letter written by Aitken, not the resolution of Congress,” Rodda writes, “The only help Aitken ever got from Congress was the resolution endorsing the accuracy of his work.” She also notes that the Aitken Bible was first called “The Bible of the Revolution” not during the American Revolution but in 1930 by people who were trying to sell copies of it, and Aitken himself “ended up losing over £3,000 on the 10,000 Bibles he printed.” This is one of Barton’s many false tales about American history.[5] Even Christian academics have emerged as some of Barton’s leading critics.[6][7] Some far-right Christian commentators are also upset with Cameron, with one claiming that he is misrepresenting America’s “pagan” history as Christian.[8]

In the film, Cameron goes to Europe and learns that the Puritans were persecuted by the Church of England and fled to Holland to find religious freedom and escape a society where the “government controlled the church.” Visiting in Plymouth, Massachusetts, Cameron claims that the Pilgrims established a governmental “system of all men created equal under the law.” Cameron tries to find the secret that will be the key to stopping America’s plunge into moral and economic disarray.

He finds the secret at Plymouth’s National Monument to the Forefathers, which was built in 1910 under the leadership of Freemasons (but Cameron's film gives the impression that the Pilgrims themselves helped construct it). The message from the monument is that faith leads to personal morality, spreading that faith creates a moral and therefore just society, and a just society produces mercy for the disadvantaged and education for the children. Cameron used the part about education to bemoan how parents can send their children to “government schools” where they are trained to be “slaves to the state,” generating an entitlement culture that breeds government dependence rather than reliance on faith. Ultimately, the secret creates “Liberty Man,” who Cameron says is “not a wimpy religious man but a stud.”

Cameron, in seeking to find out how America went from a country of Liberty Men to a fallen people, glosses over how the mythical country of Liberty Men considered African Americans, Native Americans and women to be inferior and endorsed slavery, racism, and discriminatory and violent treatment of blacks, Native Americans, and women. He also fails to mention that in Plymouth religious liberty was nonexistent and religious dissenters were mercilessly persecuted. For instance, people were not allowed to become Quakers or even give aid to Quakers - who were even executed by the colony’s government. Just as damning, Cameron conflates the Pilgrims with the Founders: the film gives the impression that the Founders had the same religious convictions and beliefs in the role of religion in government as the Pilgrims. Never mind that more than a few of the Founders were members of the Church of England, the very same church that Cameron noted persecuted the Pilgrims.

Cameron seems to be overly fond of misappropriating Pilgrims for subject matter in his public screeds; in October 2012 he whined about how a backlash concerning his earlier anti-gay statements was akin to "being drug [sic] out to the public square and stoned, so to speak" and that his critics were trying to "crucify me" because he had "blasphemed the God of Political Correctness".[9] Given that Cameron isn't bright enough to realize that being criticized for public statements is not the same as being legally persecuted (much less killed by stoning; a method divinely prescribed by his own holy book of choice) for his beliefs, don't lead us to expect much in the way of improvement from him.

See the main article on this topic: Saving Christmas 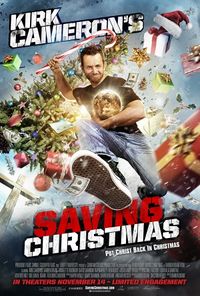 It seems like this poster is trying to say "Put Christ back in christmas, or Kirk Cameron is going whip you with a candy cane".

Cameron produced a movie that was released near the end of 2014 about bringing Christ back into Christmas. As stated in Promotional materials:

This Christmas, have your family join with Kirk Cameron's family and dive headfirst into all the joy, dancing, celebration, feasting, imagination, and traditions that glorify the true 'reason for the season.

Don't be fooled by the description or action-packed looking poster to the right: the film is incredibly dull. According to Alonzo Duralde:[10]

It's not a movie so much as it's an extended Sunday school sermonette, with Cameron teaching his born-again brother-in-law not to dislike Christmas trees, Santa Claus and gifts, because — as "Saving Christmas" is about to expend a great deal of effort to prove — all of those things celebrate the birth and life of Jesus. (Did I mention that this straw man, who can't win an argument to save his life, is named Christian?)

The film has been rated the worst in Rotten Tomatoes[11] and IMDB.[12] It won four Golden Raspberry awards, including worst picture and worst screen combo (Kirk Cameron and his ego).[13]

According to the site Box Office Mojo, Saving Christmas's total domestic gross was just shy of three million dollars.[14] Cameron has taken this as well as his other flops, and has stated publicly this is not his doing but part of an atheist conspiracy.[15] If Kirk was really helping to spread God's word on Earth then God might have made him a better writer. His prayers about this movie being a box office success obviously have not been answered in the way he wished.

Feel free to weep a copious number of crocoduck tears at the fact that Kirk doesn't like Stephen Hawking:[17]

[T]o say anything negative about Stephen Hawking is like bullying a blind man. He has an unfair disadvantage, and that gives him a free pass on some of his absurd ideas.

Professor Hawking is heralded as 'the genius of Britain,' yet he believes in the scientific impossibility that nothing created everything and that life sprang from non-life.

[Hawking] says he knows there is no Heaven. John Lennon wasn't sure. He said to pretend there’s no Heaven. That's easy if you try. Then he said he hoped that someday we would join him. Such wishful thinking reveals John and Stephen's religious beliefs, not good science.

Marriage is almost as old as dirt, and it was defined in the garden between Adam and Eve. One man, one woman for life till death do you part. So I would never attempt to try to redefine marriage. And I don't think anyone else should either. So do I support the idea of gay marriage? No, I don't.

[Hurricane Irma] This is a spectacular display of God’s immense power. And when he puts his power on display, it’s never without reason. There’s a purpose. And we may not always understand what that purpose is, but we know it’s not random. And we know that weather is sent to cause us to respond to God in humility, awe, and repentance. (This was said while he was at an airport, preparing to get as far away from Irma as possible)

[Parents should] Remind [their children] them that God is the blessed controller of all things. He is the one who gives us peace, security and strength in the midst of the storm and that he uses this to point us to him and to his care for us.